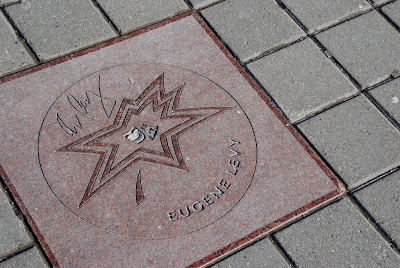 Wish we were related
Toronto, ON, March 2009

About this photo: Thematic Photographic, our weekly photo sharing activity, celebrates letters & numbers this week. If you've got a picture with at least a letter, or a number, or both in it, please go here and join in the fun.

I often joke that Eugene Levy, the actor-comedian who counts SCTV and American Pie as highlights in a career that's spanned a generation, is my cousin. He is, unfortunately for me, not. But that doesn't mean I can't repeat the joke ad nauseum and revel in the fact that a guy with the same last name as me - and a Canadian, no less - has done as well as he has.

So as I walked through downtown Toronto last year and inadvertently stepped on his brick on Canada's Walk of Fame, I had to stop and take the shot - and silently apologize to him in absentia for walking all over him, because I'm Canadian and we apologize for everything.

Admittedly, I also snapped William Shatner's, Alex Trebek's and Gordie Howe's bricks, just for good measure. I still won't ask for autographs - too obtrusive and invasive - but I figure taking pictures of hardened, colored concrete is the acceptable and polite thing to do. So Canadian of me.

Your turn: Ever had a brush with fame? Do tell?

This just in: After I wrote this, my BlackBerry chirped with news that some of the damaged bricks, including Captain Kirk's and Mr. Hockey's, will be either repaired or replaced. Here's the Toronto Star's piece on it. Coolness.

One more thing: I know Yom Kippur has already started. So G-d wouldn't be too pleased if he saw me sitting here with my laptop, updating my blog. No worries on that front: I've prepared all weekend entries in advance, and Blogger, in its infinite wisdom, is auto-posting them for me. Magical, isn't it?
Posted by carmilevy at 9/17/2010 07:32:00 PM

I haven't really had too many exciting celebrity interactions. Well really none unless you count seeing Dan Akroyd around Kingston or walking past a member of the Tragically hip but these are normal things for those of us in this area. My daughter went to Los Angeles last year to learn how to fix Red HD digital cameras. She decided to stay for the weekend and go to Hollywood. Now this is a 24 year old who grew up outside the small town of Napanee. I was relieved when she managed to find her hotel. We spoke on the phone that night about how awesome her room was. At 2 in the morning my phone rings and my heart almost stops. The first words out of my mouth were "whats wrong???" and she says nothing...I just ran into Rod Stewart on the street and I had to tell someone. That is my closest indirect experience. She also did the walk of fame the next day...even saw Lassie.

YES, I DO... When I was little, I remember on one of our family drives through Hollywood we were stopped at an intersection.. I looked at the right and saw (at the time I did not know) Loretta Young- I think she did My Little Margie.. U are too young to know.. She smiled at me. I had no idea who she was till I was watching an old movie.. Same unassuming smile.. The smile she gave me that day was priceless, I can still see that smile in my head...
Later on when I worked in Bev. Hills, I worked in a bank.. Remember Ricardo Montalban? That man was a true gentleman, he made anyone he talked to feel special.. Zsa Zsa Gabor was classy...I could go on...I dealt w/a lot.

Just a couple. I went to the home of Isaac Hayes and had dinner and hung out with his family (including his two-year-old son). A friend of mine lived and worked in Memphis at the time, and had just come off of managing Isaac's European tour. Isaac died in that same home about three weeks after I met him.

I had a nice one-on-one conversation with Gates McFadden while we both stood outside a sci-fi convention waiting for our rides. I didn't ask her for an autograph or to pose for a picture with me. It was just a nice talk.

My Mom went to a party with a football player once and wound up chatting with Don Cherry at a bar where he bought her an orange juice (she was only 18).

I love Eugene Levy - and really everyone from SCTV. :) And Canada.

My only brush with fame was sitting in a very tiny airplane across from Mercedes Ruehl back in 1999. My daughter was 3 months old and she told me she was cute (it's what you do, after all). I didn't act like I recognized her (wasn't sure of protocol and didn't want to make her uncomfortable). She was extremely nice.

All I've had is a brush with local fame: The Saliva Sisters, a group that sings satirical songs about our local (Utah) culture. The PTA of our school booked them for an evening in our auditorium and since I was the Stage Crew teacher, I got to work with them backstage. They were as funny in person as their songs were and it's an evening I'll never forget.

Cool to have a walk of fame like the one in Hollywood. We get a few celebs around London UK, as you might expect. Its sometimes funny to see someone from telly walking along the street and to almost say "hi" as if you know them. Oops.

This is probably my favorite post I've read of yours to date, I'll tell you why.... Eugene Levy is not only from my city, but I used to have his aunt as a client for personal support services. basically I cleaned her house. She has mounds of photos of him and the rest of the extended family, as well as many stories she graciously shared often. I have not met him, but from her, I feel like I've known him forever.

So glad to see you're a fan. Makes me fonder of you to know you have good taste.

Fun post. Congratulations on being a Blogger Blog of Note. Now I can say I know a celebrity!

Congratulations! I enjoyed your blog.
I am Brazilian and my blog is: www.desventurasdedavi.com
until another visit.

just wanted to say cool post & blog...congrats on your BON!

i used to live in NY, greenwich village...YEARS...AGES ago...when i was 17...ran into quite a few musicians...and then in later yrs, l;ived in los angeles...and ran into actors thyen too...and even stepped on a few 'stars' along hollywood blvd!! :)

I've had several brushes with fame. I'm a MAJOR groupie. I got backstage VIP passes and met Sting 13-1/2 years ago (I was 5 months pregnant with Sam) before sitting in the reds for his concert. That was pretty awesome.

But my most cherished has to have been on Cape Cod. We went there every summer, so Kennedy sightings were not unusual, especially as we spent many hours in the little tiny airport as my dad or grandfather would fly back and forth on weekends. Airport would get socked in whenever fog rolled into Hyannis or Boston, and that happened frequently on the Cape in the summer. I met Senator Ted several times, and he never failed to flash his million-dollar smile and shake hands, even with a shy Canadian groupie girl who had a crush on him and his late brothers.

One day, we were at the airport, and there was buzz going around that Caroline and Jacqueline Kennedy were waiting for their flight to board. Curious, but also not one to intrude, I went inside. Caroline was not there (I saw her afterwards) but her mother was. I was starstruck. This woman, tall and elegant, in linen slacks and a turquoise blouse, even wearing a bandanna/scarf on her head, seemed so everyday but had the air of Class. People knew enough to leave her alone. She was never a politician, per se, like Ted, so there seemed to be an unspoken agreement to let her have her space. I admire that about New Englanders.

She was reading in a chair, and I hung back until I saw her go to the little snack bar. She sat down and ordered a cup of coffee. I sat one seat away from her and ordered a hot chocolate. I didn't stare, I was old enough to know better, but I was incredibly buoyed by her being so close.

I snapped photos as they walked across the tarmac to board...I couldn't help it. I'll have to dig those out and post them.

LOTS of other sightings too, but I'll give others a chance now. :-)