Pink bike in a blue studio 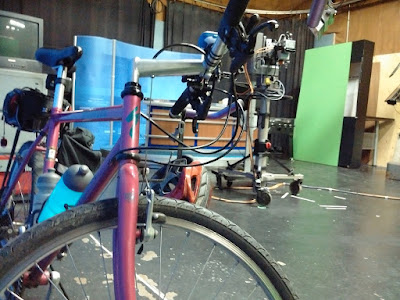 There's only so much fossilized leftover dinosaur juice to go around. And even if the planet had an unlimited supply, burning it contributes to global warming and a host of other eco-unfriendly side effects.
So I try to take the bike whenever time and logistics allow. You have to plan a bit - leave extra time, prepare and pack clothing, ride less aggressively so you don't arrive in a puddle of sweat - but with a few minor adjustments, it can easily be done.
Except when I'm doing a televised interview. Between the clothes requirement, the timing and the distances involved‎, biking to the studio isn't usually much of an option.
But I've been throwing caution to the wind more often lately, and as part of it I thought it would be fun to take the bike, anyway, and see what happened. As it turns out, two wheels beat four: riding the bike recharges the brain and it felt better to be in the chair after cruising the 10-ish km on the bike.
I'm pretty sure bringing my bike into the studio breaks a few rules, and I'll bet it's only a matter of time before this entry nets me a stern phone call or email. But no one ever said choosing two wheels over four would be the easiest path. I've never been a fan of easy, anyway.
Posted by carmilevy at 8/29/2015 03:27:00 PM

Next time I see you on holding forth the telly, I'll check to see if you're looking a bit windblown, and then I'll know it was a biking day.