The place where he sleeps 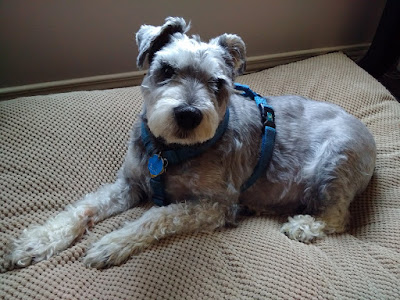 We bought Frasier a new dog bed earlier this summer for a number of reasons. First, his old one had become ratty and worn. Second, he almost never used it, often preferring to sleep on the hard floor immediately adjacent to it. Third, it was too small for him, so even when he did use it, he'd hang half-on, half-off. Fourth, it was his birthday and even though dogs probably have no concept of calendars, milestones, gifts, numbers or even age, we wanted to create a happy moment‎ for him all the same.

So when Debbie and the kids brought it home, he greeted them at the door with his usual deafening concerto of howls, accompanied by the frantic shaking of his posterior end and no small shortage of jumping and hugging. He skipped at our heels as we carried the dog bed into the house and put it where the old one had been. He immediately bounced into the new bed like a sugar-fed child on Christmas morning, digging his paws into the cushy fabric and rubbing his nose in it. Doggie nirvana.

The happy moment was short-lived, as he soon returned to sleeping on the hard floor right next to the new bed. No amount of us picking him up and plopping him into the middle of it seemed to make much of a difference: Eventually he wandered off.

A couple of weeks ago, however, he started tucking himself into the new addition, as if he needed a bit of time to discover it for himself.‎ Now, while he still camps out on the ceramic floor when we're on the other side of the house, he's all-bed, all-the-time when we're in the living room.

So this morning, as he chilled in the air conditioned comfort and tried to ignore the heat and humidity just on the other side of the window, I thought I'd steal a few pixels of him. Not for any grand reason, mind you, but because everyone, even a dog, should have a comfy spot to call home. And that should make us all smile just a little.

Your turn: What's your comfy spot?

(hopefully get an image up on the blog soon)

Mine is a beautiful leather armchair we bought earlier this year - absolute bliss! It fits me in all the places I need fitting, and relieves the everlasting pain in my back beautifully! Just you try and get me out of it!!

And our dog knows his bed, and even if we move it (for cleaning purposes, you know!) he will sit on it right in the middle of the floor! Should he sleep elsewhere, it is always in the same spot in that room, or on the half-landing on the stairs. Well, we all like the familiar, don't we?!