Touchstone in a studio 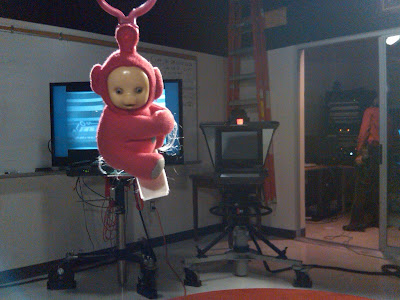 This is the view from the chair at the University of Western Ontario's television studio. The state-of-the-art facility belongs to the journalism faculty and is primarily used to train the media pros of tomorrow. Lucky for me, it's also a full-broadcast-capable resource, so I often find myself sitting in the middle of this place, talking to interviewers in faraway places about topics that are almost too cool for words.

Po, the littlest Teletubby, hangs off of my omnipresent camera bag and serves as a reminder that you can never take life too seriously (see here, here and here for more.) Almost three years ago, I had another sidekick here; I had taken my dad to sit in on an interview with the CBC. I probably shouldn't have done the interview in the first place, as it was our son's bar mitzvah the next day, and on this evening, we were scheduled to be in the middle of a house full of out-of-town visitors for the traditional Friday night dinner.

But I didn't want to say no to an opportunity to work with our national broadcaster, and I thought it would be neat to let my father peek into my rather nutty little media world. How often, after all, was he with us and healthy enough to ride shotgun on a local adventure?

So off we went to the studio, and as I settled into the chair he chatted like a kid with David, who has run the facility and the program for more years than I've been around. He asked countless questions as David flitted between the floor and the adjacent control room, working remotely with the folks in Toronto to adjust sound and camera settings. He beamed as he took in what was going on and how it all seemed to seamlessly come together.

With a thumbs-up and a sideways-glance-smile, the studio went silent and the interview began. I could feel my dad watching, and the five-minute hit flew by. Another thumbs-up from him after the red light went off: A great interview. The car was a happy place as we finished up and headed, late, to the dinner. My wife was, um, slightly displeased when we arrived, but in retrospect I'm glad I stretched the schedule a bit. (Life lesson: Hold onto the small moments.)

Tonight, we gather again for the Friday night dinner before our daughter's bat mitzvah. Three years on, my dad won't be there, and if I get called for an interview, I'll be going alone, as I now do every time. But the next time I watch the red light go on, take a deep breath and answer that first question to get into my groove, I'll silently think back to the time I got to make my father proud.

Your turn: If you've got a memorable small moment with someone who mattered, I hope you'll share it here.

This just in: So just after I clicked the Publish button on this entry, my phone rang. It was the CBC, and they wanted to talk to me. My wife raised her eyebrow when I told her I wanted to do this one. I told her to trust me, and she did. So I went into the studio earlier this afternoon. The serendipity of working with the CBC again today seems almost too perfect. Maybe I wasn't alone after all.
Posted by carmilevy at 10/08/2010 02:38:00 PM

That's just cool Carmi ;) I'll bet your Dad had a hand in that.

Carmi - your dad will be there with you, tonight, and tomorrow, and as he has been with you for the past year-and-a-bit. He's been with you in other ways, when he was here on Earth, but now? I'm pretty sure you're not alone.

Mazel-tov on the bat-mitzvah; it will be hard, to not have your dad there, the boys' bar mitzvahs were two times I found almost unbearably emotional when thinking of my mom and how she would have kvelled to be there. But - as I believe - she WAS there...we just couldn't see her.

You will make the most of this weekend, and your most is worlds more than most peoples' "mosts". We're with you in our hearts.

wow, and to think there are no coincidences in this life.... Of course he was there making that serendipity happen! Your Dad's spirit is with you always Carmi.

Happy Thanksgiving to you and your family. And special best wishes to Dahlia too.