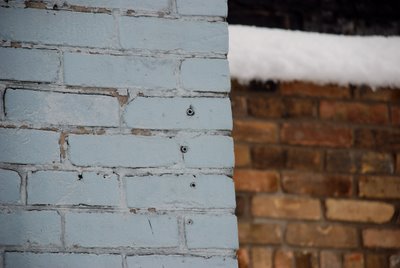 We don't tend to give too much thought to brick. It's a timeless building material that can either look really rich, or really destitute.

While wandering the neighborhood just east of my office (see this entry for the back story), I found myself standing next to a building that had clearly seen better days: Windows were either boarded up or left open the elements, water streamed from a leaking pipe, and the brick was crumbling in places. The owners resorted to the long-held tradition of painting the brick at the somewhat-more-serviceable front of the building. This is a short-term fix at best, for the typical paint succeeds only in suffocating the brick and locking in moisture, which only accelerates its decay.

Still, the ill-planned but well-intentioned shade of blue contrasted nicely with the traditional yellow brick behind it. And when a smiling white-bearded gentleman carrying used furniture emerged from a door around the corner happily wished me a good day as he carefully walked past me, I figured this building had some life in it yet.

Your turn: From the looks of my stats, I've been getting lots of readers, but few commenters, of late. If you're lurking, I hope you'll take a moment to delurk and share your thoughts on the bricks in your neighborhood, and the stories they tell.
Posted by carmilevy at 12/12/2006 06:48:00 PM

I live in NYC. My neighborhood in called "the garden in the city". All of the buildings are made of brick. Some have been power washed an repointed and look brillant.

Today I walked down a street lined on both sides by the "graystones". Called that because, you guessed it, the brick used is gray. Well, it's closer to light black because it hasn't been cleaned in over 30 years. I thought to myself how sad these building look. More like haunted houses than historical buildings.

First off i wanted to say thanks for coming by :) Thanks for the sweet and funny comments..lol

I have never understood painting brick but I always figured " different strokes" ya know... Our brinck is the natural color as is the whole neighborhood. Luckily noone has tried to paint over it ...yet!!

I do have a question though.....Is that snow I see on the yellow brick? I do miss snow.

Nice contrast on the brick!

While snow storms can be a pain when you are trying to live and work amoung it ...I do secretly miss them..lol I remember getting snowed in and having to cuddle up and drink lots of cocoa, while waiting for it to melt. The best part of all was it was free no work days!!!..lol I am bad I know it..lol

thanks for the reply :)

Thank you for your comment about the baby. I am glad I came upon your blog through Michelle's last week. While I haven't had much time to comment since then, I have read a few of your posts. Your perspectives are often both inspiring and unique. I will surely visit again.

The first thought that comes in my head when I think of bricks, is that old story with three little pigs and houses made of straw and sticks and bricks. Of course the house made of bricks withstood the onslaught of the big bad wolf.... good recommendation for building with brick.

Turkey Lurky! I lurk here often, but comment usually. Getting comments can be like pulling teeth for some folks...

I have loose, red, bricks under the stairs, out on the deck, around the yard lining small gardens. I have boards on the deck which I make a bench, table, n shelves for plants using them. Or I'll weigh down that which gets blown around in the sea breeze...

One thing that I love about being in such an old, historic place like Harrow-on-the-Hill (UK), is the wonderful brick buildings and the cobblestone streets. I like brick because it seems so sturdy and permanent. The first house we moved into here (just a year ago)was over 200 years old and had exposed brick and bracing on the inside. It had so much character...I LOVED IT. They dont make homes like that anymore.

Since we've moved into our first house, I have noticed that many of the older houses have brick along one side and perhaps as their foundation. If you go just a few blocks down the road, however, you find that most homes have plain siding, and the brick has been completely abandoned. There is something nostalgic about brick, something within its qualities that make inherently homey.

The fact that we have an entire brick fireplace in the living room was one of the main reasons we got this house!

I would love to find a bunch of old brick- It would even be better if it was from different sources for variety... And redo my back patio. the old cracked concrete just isn't doing it for me and I'd love the change....

I can't comment on bricks in my neighborhood, as there are none...but I can comment on the brickwork at Ft. Riley, where my husband is stationed...I will have to get some pictures someday. Buildings built during the civil war or before. Large limestone blocks, some covered with years and years of soot.

But the most awesome part is seeing the fossils in the brickwork! I REALLY need to take some pictures of this.

Love this photo, Carmi. Beautiful contrasts....brick is one of those things that is simply timeless. But try to have a new house built with a brick exterior! We wanted to build a home in Florida out of brick and they told us to expect to pay at least $30k more.

Classic is definitely not cheap!

OK, the funny thing is...when I went to take my Photo of the Day today for my blog...this is the one I ended up with...it has bricks! Ironic!

My daughter and I have been touring colleges. We've had a lot of brick thrown at us.

It seems traffic for commenters is very very quiet these days...Must be the coming Holidays...I know I am not getting around very much...Too much to do here...OY! (lol)