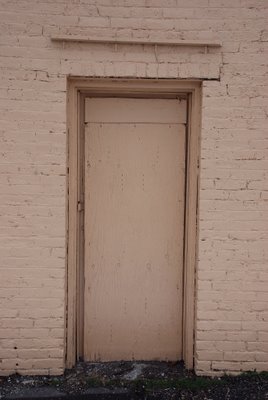 My office is located in a fascinating part of town, on the very eastern edge of a district known as Woodfield. Some of the oldest buildings in London are found here, and it is here where London's ruling elite first built homes in the 1800s. Walking the streets here is a lesson in history and humility.

Just to the east lies a neighborhood that is just as old, but nowhere near as lovingly preserved. Known derisively by Londoners as East of Adelaide - or EOA, for short - this half of the city is often considered the place that time forgot.

Of course, it's easy to make black-and-white assumptions about a neighborhood. Sure, the shopping strip along Dundas Street has seen its better days. And, yes, the streets that adjoin the main drag can be forlorn to the uninitiated. But the photographer in me thinks there's a hidden story in this place, a glimpse into a world most of us from the so-called right side of the tracks would almost never take the time to explore.

But explore I will. If I've got some time over lunch and I happen to have my camera with me, I'll wander the streets and capture whatever scenes speak to me. The poignancy of a decaying urban environment has always been a strong interest of mine. I don't know why. Maybe because it's different. Maybe because no one else takes the time. Whatever the reason, I hope it lets me grow as a photographer.

About this image: A forgettable one-storey painted brick building houses a place called Bingo Country. It's right across the street from The Adult Superstore (go ahead, use your imagination) and even on a sunny day, it's a miserable and gray place to be. This door likely hasn't been used in years. One wonders what lies behind it. Or maybe it's better that this question remains unanswered. Either way, its stark lines remind us that not all doorways are welcoming to passers by.

This is my first time to your blog, and I have to say, I hadn't known what to expect; however, this post just drew me in, and now I need to link to you so I remember to come here in the future!

As for urban decay and its allure for storytellers: I suspect it has a lot to do with the atmosphere. There's so much to play with in terms of setting and how that dilapidated scene can either be a stereotypical breeding ground for despair or ironically be the birth of hope in a character imagined. Either way, it does make for a very interesting place to set one's story!

I am always fascinated by old buildings and areas. I think it is because I like to imagine a world as it once was...before the delapidation and decay. The other reason I like these older areas is because I love to see the potential of what it could be in the future. The hope is that these places will one day be thriving like they once were. It only takes the vision of one to stir a community.

Love this, Carmi. I think we are fascinated with these kinds of areas because generally, they used to be something else. A major city near me in NJ used to be a thriving, wealthy city - after the race riots in the 1960's, it never recovered and is now slums. But in with the dillapidation (is that a word?) you can still see the architecture that used to be, and it captures your imagination to think that what now houses the homeless used to house the rich.

Again, love this idea Carmi. Can't wait to see what you find next.

There is no doornob, no handle, no lock. It's as if the opening has been walled off. Did it ever function as a door? Perhaps. A mystery. Made deeper by the location, the decayed surroundings. Was this a thriving business, once upon a time; or restaurant, or an urban apartment building? Then it comes back to.... no door handle, no lock... is it a real door if there is no way to open it?

I love your imagination. I love the way you can look at something so ordinary, and come up with such thought provoking questions and stories. I love it!!

Thanks for stopping by my WW today :)

Did you happen to get any new snow pics? :) *crosses fingers*

I saw your delurk request so I'm commenting during the week as well as within the Michele game. It looks fun to see you are exploring the wrong part of town.

Every doorway has a stack of stories.

I love urban decay, and suspect I live in an neighbourhood a lot like EOA (I have friends who live there). If you're interested, many of my photos on flickr involve crumbly and peeling architecture. It's at http://www.flickr.com/photos/cinnamongurl/.

It's not so much the storytelling possibilities that appeal to me as it is finding beauty in the margins, in places most people try to rush past without really looking.