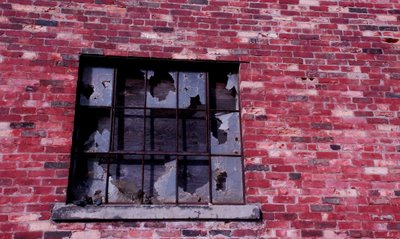 This picture was taken just beside the railroad tracks that define the southern border of London's downtown core. The richness of the worn red brick startled me when I first saw it, and I tried mightily to get the wall and the adjacent tracks into the same shot. In the end, the lighting didn't work. Neither did the composition. I was trying to tell two different stories, and that isn't always feasible in the same frame.

[Please see my earlier entry, Wrong side of the tracks, for the other side of this story.]

So I stood on the tracks and shot straight north. The resulting image of ruined architecture haunts me. I know that society has its fair share of tangible and intangible fringes. I generally keep such thoughts in the back of my mind, namely to ensure I don't end up on the wrong side of the tracks at the wrong time of day. But the fact that they are off-limits makes them a source of curiosity to those of us lucky enough to have a warm home to return to.

They had to have been livable and nice at some point in time. The area wasn't always populated by drug users and other seeming castoffs of society. What happened to precipitate these buildings' - and the people who lived and worked in them - decline? Can we learn anything by heading down there and taking a look?

I don't have the answers. But I do know that I need to look at the uglier aspects of our world a little more often through my lens. Whatever stories lurk there, I hope to reflect them in some way here.

That is a beautiful picture Carmi! I love abandoned architecture, I grew up in Massachusetts where nearly every piece of real estate is in use, the town I lived in had exactly 3 boarded up buildings when I was a kid & I was fascinated by them. Here in Virginia, there are a lot more unused & abandoned houses, garages & farm buildings. I lack only a camera & time to go out picture taking!

Hi from Michelle's, Carmi. I really enjoyed your photography. I've asked Santa for a new camera for Christmas, so hopefully I'll have some things to share with you after the holidays. Have a great weekend.

I agree with Becky. I like that picture and not because of a taste for ruined architecture but rather because the aged brick is pretty in its own right and the plywood only accentuates the beauty. Of course you saw the entire building, Carmi, and I suspect that the building as a whole was in sad shape. It is unfortunate that buildings, like people, are sometimes abandoned to the seamier elements of life.

Michele sent me to your side of the tracks. Again!

I think about dilapidated structures in a lot the same way. What caused its decline? What was it like at its peak? What kind of people used to inhabit it, and were proud to do so?

I always want the stories behind everything. Same reason why I love old cemeteries.

I agree with the others in that the brick looks wonderful in that picture. It is a shame that old buildings like that can't be renewed and reused somehow.

I am drawn to crumbling bricks, peeling paint, boarded up windows, that kind of thing, over and over again. I love the tones and textures of brick, even if it's not crumbling.

Several crumbling buildings in my town have been redeveloped into ritzy condos, which pleases me in some ways, but saddens me in others.

When I was doing a lot of photography, I enjoyed going into cities and shooting ruined buildings--some of my favorite pictures was of the tearing down of the Homestead Steel Mill outside of Pittsburgh. I like the color in your pic.

Seeing dilapidated old buildings brings back memories of my childhood. As a five-year old I lived with my parents in an old apartment house on Ridout Street where the court house now stands. Around the corner on Dundas Street was a Loblaws store with creaky hardwood floors. I can still see the images of that store in my mind.

Our next home was on Wharncliffe near Blacfriars. I used to ride my green Sunshine tricycle for hours on end up and down the sidewalk.

Photos like this remind me that we sometimes have to look past the ugly in life to see the beauty hidden behind it.

Michele sent me over tonight.

Michele sent me this time...but I'm here all the time! This photo looks like the same building where you found the lock picture in the contrasting new and old locks entry. Very nice.

i love the red brick, the details on your photo looks great.

i love architecture especially old kinds; that's why i like Quebec in terms of its old buildings and churches....

This building may be abandoned but the brick is beautiful, looks sturdy and in good repair. So the windows are broken, this can be fixed. Is it a warehouse or apartment building or what? I could see this reinvented as a great city home, like the lofts atop warehouses in NYC.

the color of those brick - they dont seem OLD, but then neither do i? hello from michele ( or as its known now," the Carmi show"

Your photos turn the ordinary and neglected into something to see again through new eyes. Old bricks, fractured wood, broken windows, but still blazing red....much like a wise & creative mind in a body that has seen too many years. Hope filled. Thank you for visiting my blog.

I think of the ghost of the architect-builder, fretting over the crumbling of his work...

They must use a special type of local red-clay to make that color brick-
Assemblage of fragmented n staggered segments - bricks in order, glass in chaos...

Wow - those bricks are really a lovely red which does contrast sharply with that black hollow looking window which is a dirty stain in the brickwork.

I agree with you, I think sometimes it is far too easy for society to ignore it's mistakes and move on and these buildings (and the stories they tell) become more and more forgotten.

Thanks for dropping by my blog and glad you liked my NYC pics. You really do have a fascinating job!