Scenes from a snowy night

When an intense snow storm began its dramatic march from Lake Huron this past Thursday, I wondered how I would be able to record the experience with my camera. I happened to be outside early in the afternoon when the first squall swept in off the lake and turned a brilliantly sunny scene into something like Dante's Inferno. I was carrying my camera at the time, but I didn't dare take it out of its case for fear of coating the lens with flakes. Not my idea of photographic excellence.

So I went home and tossed it around my head some more. Outside, the winds picked up and the snow intensified. Our kids tucked in for the night, unaware of the adventure that awaited them the next morning.

Just after 1 a.m., my wife and I were still awake. We opened the drapes in our room and marvelled at how much snow had already fallen. Then it hit me: just put the camera on the tripod and take some

long exposures out the window. Longish - 6-second - exposures would allow decent depth of field and give the security light on our street a chance to cast a subtle glow over each image.

These images were shot from our bedroom window. Shooting through windows isn't always an optimal solution, but it beat standing outside in howling winds. These images were only possible from a sheltered, interior vantage point.

Eventually, the plow came by to dig our little neighborhood out. I thought it might be neat to leave the shutter open for 30 seconds or so to 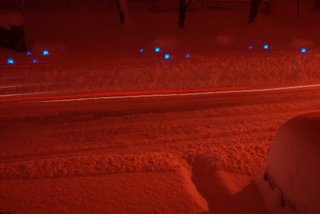 see what cropped up. I've been thinking about head- and tail-light tracks lately, and this capture is my first crack at it. I think I'll be staking out late-night street corners in the near future, so expect to see more ghostly tracks of light before long.

The last image is my favorite: a wide shot of the maple tree that protects our kids' beloved giant rock on the front lawn. I've captured it many times before on this blog. As I've noted before, the same subject can serve as the basis of dramatically different pictures depending on when and how you shoot it. This time, our beautiful tree didn't disappoint. 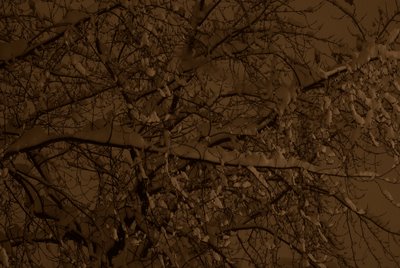 enjoyed the photos. i would record a storm that way too... but then again, i am a photoholic. here via michele's. have a good one.

I love the pictures Carmi. It was fun to watch the snow fall, with you.

I love the lights in the photo with the snowplow!

back again from michele's. :)

Whenever we have snow here, it falls in the night and by morning it is usually still enough and warm enough to take the camera outside. Though my husband I suppose could always put his camera in its underwater housing if he needed to take pictures in a storm. I like your night-time snow shots, though. Michele sent me back so it's good to see some new photos up.

I long for a new camera, you are closer to the North pole, will you tip off Santa? please...

oh yes I have what I think is a picture of you on my blog.

Beautiful photos...I enjoyed viewing the storm with you!

I had trouble seeing any of these images Carmi...My eyesight is not great and maybe my moniter is having a problem, too...Sorry..I couldn't really see enough to comment...
Michele semt me tonight, my dear...

Here from Michele's again, this time.
Oh, Carmi, those are magical. They make me miss cozy winter nights by the fire.

I usualluy shoot from the front porch, or wait til it's over.
Your choice was very interesting...
usually snoew shots are so white n ill-defined, good job.

Here from Michele.
We don't get much snow here but the last time we did I took pictures from the front porch. It is covered and sheltered from the wind for the most part. Our light cast an eerie blue-green cast on the pictures, making the scene look as if it were shot on another planet. Of course the next day with sun shining there were the obligatory pictures of the child (even as a teen) making snow angels.

These photo's look fantastic! And I love the idea of recording them from inside the house! :D

These were awesome, Carmi. (I need to spend more time experimenting with my camera)
The tree was gorgeous but my favorite was the one with lights...looked almost like a moonscape.
And yoo hoo.....we don't record snow storms in Florida...lol

I can't see the photos, Carmi, so I lightened one and sent it to you. It is a great capture of snow in the tree.

I hope I do get some nice shots of this years first snowfall...if it ever gets here. Like you I am afraid of getting my lens wet but love the shots you see being right in the falling snow!
Those are very nice....looks like you got quite a bit!
Michelle sent me today!

Really beautiful!! But I'm glad we haven't seen snow yet...

Hi Carmi...Well, I still can't see them, but maybe I'll do what Judy did and try to lighten one...!
Michele sent me today, my dear!

Coming out of lurkdom to say hello from a fellow Londoner, and show you our pictures. I swear on my blog, just to warn you ahead of time. :)
http://www.troll-baby.com/2006/12/08/buried/
(Click to enlarge once the page loads - it's a little slow today because of the contest in the sidebar)

Those top two are gorgeous, Carmi. I didn't see the chimney behind the tree branches until I enlarged the picture. It's so striking. I love the way that it seems to float in the background almost like a watermark on paper. The branches are also so graceful. I love them.

I've never been able to get a good picture of moving lights in traffic like yours of the snowplow. I need to really work on that sometime because the results are so nice. I've never seen the effect of the lighted cabin(?) before. I like it.

Michele sent me over again!

ohhhhhh I love them all. they bring back great memories of being back in Ky in the winter!!!

Thank you so much for sharing :)