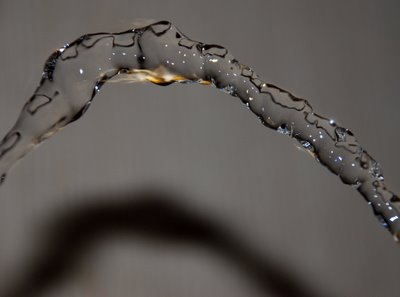 I hover closely over our kids whenever they use water fountains. I worry about them slipping and falling face-first into hard metal. I also worry about them - horrors - touching the faucet with anything but their hands. After 12 years as a parent, this is one of the few things that can still make me squirm.

So while attending a family gathering, I followed our munchkin into the hall and stayed close as he got a drink. Bear in mind that six-year-olds take their sweet time. As he slurped and slurped, I watched his face and wondered how I would be able to record the moment.

The layout of the wall made a well-composed picture an almost impossible task. There just wasn't enough room for me to get it all in. So I did the next best thing and asked him to keep the fountain running while I shot from in front and below.

The result stunned me. I have no idea where the little flame-like thing at the top came from. But I won't complain. This is a perfect example of the virtues of direct flash. I usually prefer to bounce it, but that'll have to wait until Hannukah Harry delivers me an external flash unit. For now, I'm using the built-in flash on the D80. And while conventional flash doesn't always make for effective macro images, I thought it might do the trick to freeze the fast-moving stream.

I also learned the virtues of a great assistant. I could have never shot this alone, and I hope I can involve our kids in future shoots as well. Looks like we'll all be hanging around water fountains again.

Wish I had a nice camera - but my little digi does what it can!

The image reminds me of those I have seen of the behavior of water in microgravity on the Space Shuttle.

I love this shot too! And I love shooting water as well, especially when I'm around fountains.

Yay for the direct flash! You probably couldn't have captured that flame with an external flash. But even without the flame, I still like the stream of water. It almost looks like it's made of ice, or glass. It's so glossy.

What an amazing shot, Carmi! And that flame...awesome. I also love the shadow effect in the background. So yes...keep playing in the water. Doing child-like things like this will keep you young forever....lol

I'm going to agree with everyone else and say, "Keep playing with the water!" You definitely have an eye for the interesting and captivating shot.

And isn't it funny how all parents worry about the water fountain? I think that must be a common trend across all families!

That's really cool. I'll have to try that some time now that I have an incredible amount of free time.

Love this one and I;d say just keep playing with your kids, Carmi, no matter what medium you choose!

Here from Michele this time...
Wow! Did you ever figure out what the "flame" look was? My guess would be a reflection of the flash with the water still moving a little making it look like a flame. (If the water was moving to the right)

I went up to Williamsburg to get pictures of the decorations in the Colonial area and didn't plan to take too many. I ended up with 150 even after ditching the obvious blurred pictures. They were gorgeous this year.

Bloody oath I'm liking this image! It's pretty amazing the way it looks like there is a flame on it. Well done. Yeah, keep playing...

I like it very much! I love photographing water, you're very lucky to have such an able assistant :-)

Michele sent me back, carmi, and I "embiggened" the photo. I was struck my all the reflections in the stream, especially the small points of light. It is really amazing how much detail is shown in that one small stream.

You have an amazing talent for capturing what is normal and making it spectacular...

That is one of the coolest shots I've seen!

I love this - it's almost 'Fire and Water' with that wonderful flame effect......

hehe how about you splash them with water and take their picture to see the looks on their faces :)