Sunset over a church graveyard 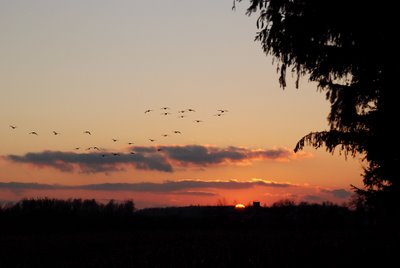 The kids had a playdate this afternoon just north of the city. As I turned off the main road into the subdivision on my way to pick them up, I noticed the sun setting behind the church on the corner to my west. It glinted off the gravestones and served to highlight every subtle nuance in the old stonework - at least that what I gathered as I took a mental snapshot from the wheel of the car (you didn't think I'd drive off the road while scoping an image, did you?)

I knew I had to come back before the sun went below the horizon. So after I collected the munchkins, I drove back, wondering how I'd capture the scene I'd seen so fleetingly from the road.

When I arrived, the fast-moving sun was too low in the sky. The gravestones were mere silhouettes, and my earlier plan was toast. But a flock of Canadian geese was practicing its formation flying. Around and around they flew, their honks echoing off the silent gravestones. I levelled the camera against the adjoining fence and started shooting. Birds don't really listen to
instructions all that well, so I held my breath and hoped against hope that they'd add just the right finishing touch to the scene.

Your turn: Does this graveyard merit a return visit?

One more thing: While I captured this, the kids waited in the car and ruminated on the creepiness of where they were. They're used to this sort of thing by now, and I'd like to think having an eclectically photographic father will give them some interesting and memories as they grow. And if it inspires them to follow the road less travelled every once in a while, then I guess I'll have done an OK job as a dad.
Posted by carmilevy at 12/02/2006 07:29:00 PM

If you're itching to take a photo of the place, you should absolutely go back. Me, I hold my breath when I pass a graveyard. Superstition. The geese are cool, though. And though I'm not a parent, I have seen enough unsupportive, passionless doofuses around town to know that it sounds like you're on the right path.

Yes, go back! and we all know you are doing more than an ok job of being a dad!

I thought Canadian geese flew south for the winter. Are those lost?

I see things all the time that I'd like to photograph! Unfortunately in rural VA the roads are 55 mph unless otherwise marked & just pulling over can be hazardous to your health!

Hi Carmi! That is a creepy, but cool image...

Hope you guys are enjoying your balmy weather! We're finally out of our ice-age now, here in Van!

That photo gets prettier everytime I look at it, Carmi.

Michele sent me this time too.

Definitely go back. The shot that you got was beautiful. I don't think the image is creepy. It just seems to symbolize how life goes on.

Awesome pic. Absolutely a return trip is in order! You're doing a great job as a dad too.

Hello, Michele sent me this time...

I love the geese in the twilight sky. Please visit this place again?

AMEN!!! I love that picture---talk about the right place at the right time...The Birds! Magical.
Yes go back for the Gravestones, my dear....!

That is a good photo. I would go back for the graves though. I think that would make an even better shot.

Definitely worth going back. I love graveyards! I don't think they are creepy at all. I have seen some wonderful landscape photographs where the photographer made repeated visits over six months until getting the light just right (though I don't think I have that much patience)

Here from Michele.
The geese add the perfect touch and balance. And again, I was thinking of Canadian geese while writing my last post. I have a picture of the V-shaped flight overhead but haven't posted it yet... (found a smudge on my little lens). They are here year round and I love hearing that honk in the distance.

I like the photo, the geese add an interesting contrast to the graveyard, the living among the land of the dead.

Here again from Michele.
I don't think I will ever get enough sunset or sunrise pictures. They are so peaceful.

You know you have taken a LOT of pictures with your kids around when they call from college and ask when you are coming to take pictures of the Christmas decorations at Williamsburg... and don't ask "when are you coming to see me" or bring money or all the other normal questions.

oh, and all the way from the UK - I think you're an ok dad....showing your children that passion is a good thing :-)

Carmi, you should absolutely go back. I love graveyards. I have tons of pictures from Bonaventure Cemetery in Savannah, Georgia, that I took in April. They are just gorgeous.
The sunset is awesome, by the way :)

DEFINITELY a return visit. I love graveyards - there are so many stories in them.

What a great shot! Yes, I would say that definitely merrits a return visit. It will be interesting to see what other photos you can take.

Here I am again, Carmi, Michele sent me three times! You never told me if the geese were lost, or if I am wrong about their migrating south for the winter.

Judy: I'm quite certain the poor geese are directionally challenged. Or they're from the bottom half of the class that didn't pay attention during navigational instruction.

Interestingly, some geese seem to stay in the London area through the winter. I'm not sure why, but the stragglers tend to stay closer to our bodies of water - namely, the rivers and tributaries that run through town - and the farmers' fields just beyond the perimeter.

It was fascinating to watch them fly in endless circles, as if they were preparing for a moment that would never actually come.

I think the photo you have is great but if you know you haven't got what you wanted you probably won't be happy until you've gone back to get the shot you want!

It's a beautiful picture and yes I think you should go back :) I hope you've had a good weekend. Take care.

what an outstanding shot. cool title too.

I think the clarity of definition of those moving birds in the low light with that cam is amazing!

We get Canadian Geese that winter in the cove outside my window in the snow, too! Some pass through, some nest here in spring- the birds have been plentiful. I think injury n infirmary makes them stay closer to the Artic. Also, I read somewhere they mate for life, n won't leave a mate behind.