I took a walk over lunch yesterday. I headed a couple of kilometres west of the office to the river (the Thames, big surprise) that cuts through the center of town. I had it in my head that I would take a few pictures of whatever birds were hanging around the park before the inevitable freezing of the fingers would drive me back to the office.

I tossed my camera bag over my shoulder, buttoned up my trench coat and headed out into the off-and-on snowfall.

When I got there, I saw the usual noisy band of ducks and Canadian geese hanging around the riverbank. They were fighting over scraps of bread, which made it easy for me to take my camera out and start shooting without frightening them. As I shot - and shot, and shot, and... - I moved from left to right to change up the perspective. After about a minute or so, I had what I thought I wanted. Then I noticed a lone bird off to the side, down on the pavement. 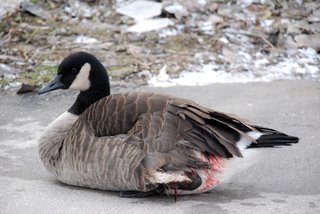 As I walked closer, the bird eyed me, but did not move. It was clear that something wasn't quite right. My hunch was confirmed as I continued to quietly step to the right and caught sight of a flash of bright red on the goose's feathers.

Wounded bird. I didn't know what to do. Not being an expert birder, approaching it seemed like a rather silly and dangerous thing to do. So I let my zoom lens do the talking for me: I used it to reach across the gap to capture this poor thing as it watched its compadres frolic in the nearby water.

I took my pictures then quickly headed back to the office. As I walked back, I felt frustrated that I knew so little about helping an injured bird, that I was unable to help.

Then I started wondering about the other wounded birds around us. They're not always birds, though. They can be people, children, strangers, people we work with, family. They are found everywhere and anywhere. But who is looking out for them? How will they make it in a world that seems to be built only for those of able body and mind? Who's there to help them when they can't help themselves?

So many questions. Sadly, I don't have any answers. Just a simple hope that a bird I met yesterday was able to survive the cold day and night, and that those around us who find themselves hurt and on the fringe can somehow find their way back to the flock. 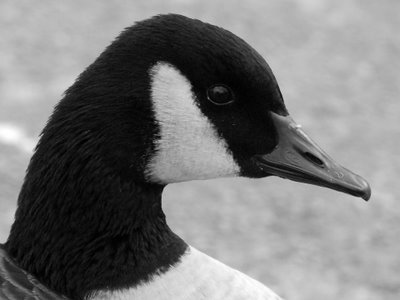 Oh me too
I hope that beautiful creature survived

Poor baby! You are such a compassionate person, Carmi. I would not know how or if I could help the bird either, but like you, I would worry about it.

Wildlife is surprisingly tough. I suppose it was hit by a car.

unrelated, but probably of interest

I see the "wounded birds" all the time in my job. Sometimes, even just noticing and reaching out is enough.

If we start thinking about everything and everyone who needs help, it can get overwhelming fast. But what would we become if we didn't at least care, and even if we couldn't reach all of them, try to help the ones we're able to?

In the UK the RSPB or teh RSPCA will help wounded wild animals.

I always get distressed when I see anything suffering.

I was never a bird person until I met my husband, who is a BIRD NUT! This reminds me of the story out currently of an Oregon man still missing after he and his family were stranded in a car. his family was saved a few days ago but he's still missing in the snow! Even though I don't know these people I find it heartwrenching.

IF it didn't look too sick, it might have just had a bad blood feather--a newly forming feather with a large blood supply that rips open--which birds can survive if the feather comes out and the blood clots. Hopefully that's all it was.

Sad but unfortunately natures way. I am really enjoying your pictures here.

In The Year of Magical Thinking, Joan Didion straightens out D.H. Lawrence on the question of whether animals grieve (Lawrence say they don't, so human's shouldn't). Geese most definitely grieve. My coworker saw this the other day--she saw a goose running around in distress on the side of the road. She then she saw why--its mate had been hit by a car.
Your fowl-to-human connection is on target. I have a new blog, by the way, on which I will blogroll you...now.

I hope that bird is alright, and I like it that you were thinking about it so much that you told us.

What a moving story. I, too, hope that the bird survived. And you're right- there are so many other wounded 'creatures' around us. It's too easy to 'dismiss' someone as surly or unfriendly or arrogant- we don't always know what's going on inside them.
Thanks for sharing this, it really made me think.

there must be an animal rescue number in your phonebook somewhere surely?

we found an injured goose on the road in cornwall last year and called the operator to get the number of the rspca and they were over in less than 30 minutes.

Ooooh, he was just gorgeous and what a great close up.
I'm hoping that his injury was such that he was able to recover. And like you, I'd have no idea how to assist.
I guess it's survival of the fittest....but we humans don't have to like it, especially when it goes on with our own species.

In Canada you would call a Conservation Officer. Usually under SERM in the blue pages. They will look after this.

That is a pretty bird. It doesn't look like a lot of blood but if it's something like a broken wing, then the outlook is grim. Having easy food around might keep her alive until she heals.

I've seen quite a few ducks and geese on lakes while taking pictures and I've never seen one blooded like this, Carmi. I hope these injuries don't happen often. Poor Goose.

Michele sent me over again. Too bad about the shuttle tonight. Neither the shuttle or the goose flies tonight.

... i had the same thing happen a few minutes ago