Click on all images for extreme closeup. Click here for part 1 to this snowy story and here for the night-time imagery. 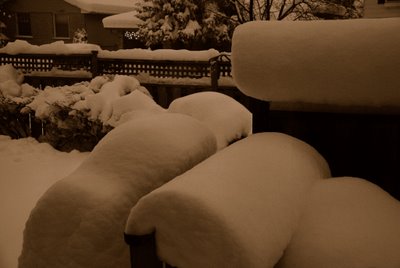 I took this picture immediately after we got word that the entire city was shut down. Schools, businesses, even the transit system...all going nowhere. We received anywhere between 2 and 3 feet of the while stuff, and it still snowed lightly through the morning as if to remind us that we were still at the mercy of the weather.

The kids were thrilled. My wife was thrilled. I was glad I had a camera with a fully charged battery and a large, near-empty memory card. So many experiences to capture... 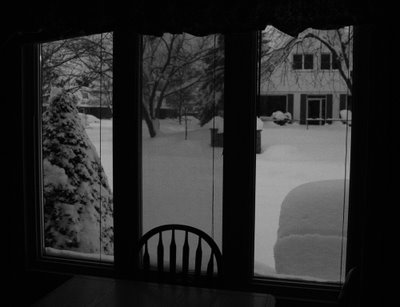 View from our kitchen window

This is where I often set up for my closeup/macro pictures. The light from this south-facing window is always just right for whatever I'm shooting. On this morning, the venue became the subject.

There's something comforting about sitting here and watching the world unfold over breakfast. When the usual external responsibilities that pull us out of the house have been put on temporary hold, we have a chance to sit here and linger. 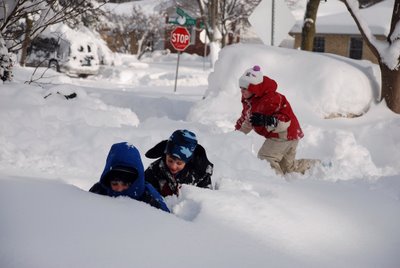 I remember a winter storm when I was about 3 years-old when the snowdrifts were taller than my parents. When the raging snow and winds subsided enough for us to get out of the house, I remember feeling very small amid the towering sea of snow. My parents dug us out. My older siblings (a brother and sister) and I played. And someone took a picture of us amidst the unique wonder of it all. I don't know where that picture ended up, but it remains burned in my memory. Funny how that works.

I thought back to that moment as our kids wrapped themselves in their warmest winter clothes and charged out of the door. I thought about how I wanted to capture their utter joy at being outside in a veritable wonderland. I moved fast and did my best to keep the camera from catching any snow.

BTW, the famous Levy family maple tree is at the extreme right of the image. The huge rock is to its immediate left, buried under an impossibly thick layer of snow. It didn't take long for the kids to clear it.

Your turn: What is it about a snowy winter's morning that brings out the kid in all of us? Do you have similar recollections from your own past?
Posted by carmilevy at 12/10/2006 02:14:00 PM

Playing in snow, like jumping in a pile of fall leaves, brings out the kid in all of us. The first time I remember a snow like taht, I was 10 years old, we got 12" overnight and I spent the next day looking for fresh patches of snow to make angels, and/or snowcream. I may have already forgotten subsequent snows, but I will forever remember that one, though it was 55 years ago.

wonderful photos; it looks just like a giant duvet and pillows and i could just imagine snuggling up - there wasn't much snow during my (irish) childhood, so always exciting . I loved the way all sounds were muffled, and with blue blue skies , surely just the way nature should be

wonderful pictures - looks just like a giant duvet and pillows 0 could just imagine snuggling up.. Little snow in Ireland so all the more exciting - with bright blue skies, surely just the way nature should be...(third attempt to post..)

I love snow! We don't get that much of it though. One year I remember Dad's friend turning up. My brother & I grabbed a snowball each and just has the friend walked through the gates we pelted him with the snowball. My brother hit one side of his glasses and me the other side! Thankfully he laughed! :D

seems I just can't get through - sorry...

i need more firewood, because looking at your front yard gives me a chill.
drop over,soon.

the kids look like they are having a blast!

I grew up in the Adirondack Mountains of Upstate NY which were places of amazing snow accumulation until the snow belt shifted a bit in the early 70s when Buffalo--and probably you, Carmi--got hit so hard. I remember climbing snow banks 3 times my height and sliding down into the road. We had to watch out for cars, of course. The older kids would skitch rides behind cars while they were driving slow through town.

Now I live in NC and once there was a 26" snowfall since I moved here but usually it never gets past an inch or two. Usually that's a good thing but seeing your pictures does conjure up some very nice memories of playing in the snow--and a few bad ones of shoveling the damn stuff.

Michele sent me over!

Woah that's some snow storm!! I've never actually seen snow like that...and considering my fear of it, it's probably a good thing!

Now that's what I call a REAL snowfall! Haven't seen one of those in many years, not since my childhood/adolesence in Norway...

Never had as much fun as when we would sled off the roof into the drifts below at our "summer" place in the country.

I remember the blizzard of '67 in the northern Indiana and Chicago area. It had been unseasonably warm on Monday and Tuesday when a HUGE front went through. We had severe thunderstorms and even tornado threats in January. Then on Tuesday night it started snowing. We went to school, 9th grade for me, that Wednesday but they sent us home at noon. My dad went and picked up my brother at preschool and my mom drove home from across town where she taught. By the time she got home she couldn't find the driveway and just got the car off the road, into a drift. It snowed all day and all night Wednesday, Thursday and Friday. Indiana had over 38 inches... the gauges ran over. School was out for a week. It was amazing.

I've never been in a storm like that since, although we had ice on top of twelve inches of snow in Oklahoma and I ice skated on the front yard.

About your comment on the red ornament. Have you ever read "The Giver" by Lois Lowry? I think you'd like it.

Back again, via Michele, Carmi. I enjoy coming back to read all the other comments. Seems that snow is a very popular commodity in some circles (not with me, though).

The first snow of the season is always magical. I love the way it shimmers! The first shot looks like a snow couch! Narnia maybe? Michele says hi.

Michele sent me my dear...Love these pictures Carmi...THIS was a serious serious snow! What fun for your kids and what memories they are creating....

Well, the most vivid memory was the Blizzard of 1947! (remember, I'm a bit older...lol)...my family and I were in Manhatten at a lawyers office that afternoon....we decided NOT to get a hotel room but to brave it and drive the apptoximately 17 miles to go home....A trip that normally (back then) took 45 minutes....So, over five hours later...we got home and THEN there was the shoveling these huge drifts about 5 feet high just to get to the front door...My mother almost collapsed from exhaustion...not fun, believe me.
It was a "famous" blizzard and still talked about to this day...

I remember one time peeing my snowsuit because I couldn't get down off the top of the barn. [Yeah we had alot of snow that year]. I remember my mom making hot cocoa..with real cocoa mix and milk. I remember my dad hooking the sled up to our snowmobile and going around corners so fast that my sister got whipped off. Man those were good times.

I'm not such a big fan of snow these days. But it's beautiful to look at.

Carmi,
Thank you for visiting my blog.

I am an avid lover of snow being raised in upstate NY..near the St. Lawrence river....the blizzard of 1977 was my most memorable as an adult; but my childhood memories are fondly filled with snow storms, wintery weather, cold temperatures, ice skating on the river and creeks and ponds, sleding, etc. I love writing poetry about snow..

During the years I lived in Colorado (1980-1992)...there were two significant blizzards....which crippled the Boulder area ....

I also lived in Missouri and one major snow storm caused the Governor to declare a state of emergency..shutting down portions of the state for a few days....my children remember playing for days atop massive snowbanks...

I used to be the first one out the door to walk in it, drive in it or shovel it...although I am more willing to pass that job off to ones younger than I now....

these are incredibly wonderful pics you have shared...may your children always treasure these moments ...

wow. I think I'm glad not to be living with snow, but I certainly love visiting it -- that looks lovely!

Love the photos. Very beautiful and full of memories.

I hate snow *anon* I hate to be cold. I grew up with snow days and was grumpy through them all. I now live where if it does snow (once every ten years) it melts the same day.

OhhhhhHHhhh It is so beautiful and fluffy looking. The kiddos look like they are having a blast!!

The day off from school.
Playing with Fisher Price Little People in the basement with Jessica Wohl. When we were older, it was sitting in the family room watching Dirty Dancing.

Meeting Jennifer Leavitt halfway between our houses, then walking back to her place to sled down the hill. Warming up in front of her fireplace drinking hot cocoa with copious amounts of marshmallow fluff. And one day, standing in her kitchen with Allison Frankel, eating slices of salami covered in mustard and kraut.

Playing in the snow with my sister, then coming in to find our favorite episode of Brady Bunch was on (Is There A Doctor In The House, season 1, episode 6).

Thanks for bringing me back. I want to slam my arm into the snow on your patio and push it onto the ground. That always felt really good.