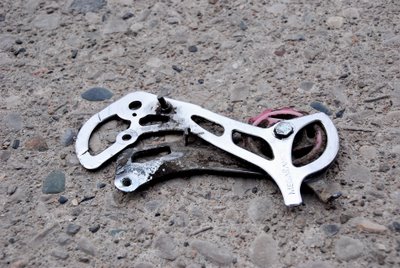 When you're walking to work with a camera slung over your shoulder, you tend to view the world differently because you have the means and the ability to capture it. Of course, when you find something interesting to shoot, you stare at your watch and quickly calculate whether or not you have enough time to grab the picture and still make it to the office on time.

I came across this sad sight on a very busy corner - Oxford and Adelaide - and thought it was almost too coincidental. As a cyclist, this struck me as a poignant image of a road now ended, an inglorious end to a life of travel. Or maybe something less glorious...whatever, I felt the need to take the picture.

To get the low-angle image, I carefully lay down on the sidewalk. I know, I'm weird that way. London motorists apparently agree, as more than a few of them slowed down to watch the crazy guy in the grey trench coat play drunk on a cold city sidewalk.

Your turn: This image speaks of sadness and loss. What else does?

Update from the future: On October 6, 2013, on a rainy, gloomy Sunday morning, an accident between a police car and a civilian vehicle sent one of the cars careening into the building on the very corner where this photo was taken. As I stared at the picture in the CTV report from the scene, I realized the car came to rest virtually exactly where I had gotten down on the sidewalk to take this shot. Sigh...we live in a dangerous world.
Posted by carmilevy at 12/30/2006 09:01:00 AM

A flat tire beside it might add a touch more sadness and loss.
Wishing you a very Happy New Year, Carmi, and lots of inspiration for your future shots.
Here from Michele's today.....

I notice that when I'm running - things look so different from what I'm used to when I drive. Too bad I can't carry my camera, and stop to take pictures.

Sadness and loss? A scoop of ice cream dropped on the sidewalk. You just know some poor little kid is heartbroken.

I didn't recognize the name of the manufacturer of the derailleur. I was never a Campy person when I rode--I couldn't afford them--and had mostly Shimano equipment.

Thoughts of sadness and loss hit me particularly hard when I see old movies, documentaries, or news items that focus on talented people that are now dead and gone. Aging is normal but for those people out there that inspire us, it seems sadder than for the rest of us.

I always wonder what the story is. I know it can't really tell me, but what if it could talk to me. How did it get separated from the rest of the bike? What happened to the bike?

When driving around the outskirts of Sacramento, and even more so up in the Sierra foothills, there are old abandoned vehicles, equipment even buildings. At one time, they were brand new. They were proudly owned by someone. Somebody bought these things... and now?

I can only imagine what those motorists must have thought!

Oh yes, lest I forget,

It's so weird that we feel sorry for inanimate objects, but when they look that sad, it's hard not to assign them a personality. I guess if I can say, "Thank you, Carol" every time my computer's voice says the time, it's not such a stretch to feel sympathy towards a sickly bike part left behind.

Is that a Bullseye jockey wheel??

Happy New Year to you and your family Carmi! I hope 2007 brings you tons of laughter, fun and peace!

Sadness and loss? Right now it is because "Pirates 1" just went off and Johnny Depp has left my TV screen!

A single but intact sneaker against the median of a busy four lane highway.

The sight of a helium filled balloon floating up into the sky. (This because it happened to Nyssa when she was little and there is nothing sadder than to see that little face, tear stained looking up and reaching with the little fist.)

What would brighten this picture? Being one of those drivers that saw you get full down on the ground to take it.... you brought joy and WONDER to their day!

A homeless person always makes me sad and I wonder what he/she has lost. There is one who hangs out near a favorite fast-food place. Sometimes I buy food for him. Also the lone shoe I see on the road now and then. I always wonder why it is there - and who lost it - and if they can afford to replace the pair?

P.S. I hope that you and your family have a Happy New Year, Carmi!!

hi carmi! just dropped by to greet you a happy new year! haven't been by in a while but hope to make up for it this year. all the best in 2007! ;)

I agree with Two Sirius about the ice cream. Also, dead, brown leaves matted together on the ground by a cold rain remind me of sadness and loss.

Oh, DUH! Happy New Year my friend. May it exceed all your expectations! Thank you for always bringing a bit of light into the blogsphere. You are one of the nicest bloggers I "know".

Here from Michele's this time.

Sometimes you've just gotta do it (ie slide along the sidewalk). And the bike bit has even got some purple on it for proper 'go faster' appeal.