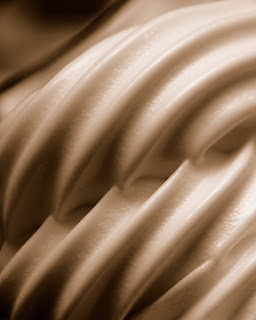 About this photo: We're sharing white-themed scenes all week long. Click here if you've got one of your own.

Vanilla or chocolate? From where I sit, it isn't even close. Vanilla may be the overlooked plain sister of the ice cream world, but it's what I'll always choose if I've got a choice.

I've got nothing against chocolate, of course, but vanilla is the understated yin to chocolate's richer yang. It's a simpler, more subtle alternative that, like a basic cheese-and-sauce pizza, betrays whether or not its makers know what they're doing.

To further beat my pizza analogy to death, anyone can load up a pie with countless toppings and call it a masterpiece. But when you strip everything away to its simplest elements, the greats are separated from the not-so-greats. And so it is with vanilla ice cream. Its simplicity forces you to take the time to appreciate it. It doesn't bomb you with oodles of taste. Instead, you savor it. Slowly.

It's even more fun if it's soft, because few things let you have as much fun with a camera in the middle of a crowded restaurant. Or make your wife cringe, because this shot required me to yet again make a spectacle of myself as I composed, metered and shot quickly before it all melted on me.

Good thing she likes me.

I love them both; sometimes I feel like I need chocolate, but much of the time vanilla is what hits the spot.

Of course, I can always satisfy both with a scoop of Baskin Robbins chocolate chip ice cream...although for someone who can't really eat ice cream, that's a craving not often satisfied...

I love chocolate but not in ice cream form. When it comes to ice cream I always get vanilla or vanilla based flavors.

After 27 years my bf still doesn't understand why it takes longer than a minute or two to get the perfect shot sometimes.

The best pictures are the ones you have to make a spectacle of yourself to get. I appreciate the effort. Keep up the good work;)

I am with you 100% on the vanilla ice cream. I actually do not love chocolate the way that most people, particularly women, seem to. Really excellent vanilla ice cream is like heaven. My favorite is a soft serve in a regular (wafer?) cone--the kind that has the hollow sections in the bottom. As the ice cream melts and you lick away it settles into those hollows, and by the time you get there it's just perfectly soggy yet still slightly crisp and when you bite the vanilla squishes between your teeth... Love that.

I'm with MB in that I love chocolate, but not chocolate ice cream.

Vanilla ice cream blows away chocolate ice cream, for me. No contest. I will pass on ice cream if chocolate is the only kind available.

vanilla? sure. dipped in chocolate.

Depends on what we're talking about. Ice cream? I'd have to agree with your assessment that it's the plain vanilla that separates the great makers from the merely good (or not good). The pizza analogy is perfect. And I must confess that in other forms I lean to the vanilla side of the aisle. There's a subtle sophistication about it that chocolate often lacks. Unless we're talking about dark chocolate mousse, which has no vanilla counterpart that I know of.

It's better still if you don't have to choose at all, but can enjoy them together!

This isn't ice cream, but it's certain that there's some ice involved here. Can't imagine it being otherwise. It's cold that high up!
Thematic Photographic 84: "White" v.2.0 - 12 0'Clock High

I admire your photographic nerve! Although this is probably not the gutsiest (is that a word??) shot you've taken, by far.

My husband suffers through my photographic escapades in public with a placid smile on his face. Maybe they should start a support group? :-)

Hmmmmm. Chocolate. Or vanilla with chocolate sauce. Easy! Carmi, this should be be great for commercial use, I think.

I like chocolate as chocolate, but for ice cream flavours vanilla wins hands down.
However like all true New Zealanders, there is one thing that is better than vanilla - hokey pokey!

The composition and texture and lighting on this one are anything but plain vanilla! Gorgeous!

personally I would mix the two together and enjoy the taste of both worlds. x

I'm with you, Carmi. Vanilla all the way. I have loved it since, as a kid, it was the only kind my mom would buy. She's say, "if I had to buy something everybody liked, I'd be buying 7 different flavors". I was the youngest of 7 and knew that if you really wanted to you could add any flavor to vanilla and it would then BE that flavor. You can't say that about any other flavor!
I prefer to leave it as is...why mess with success?