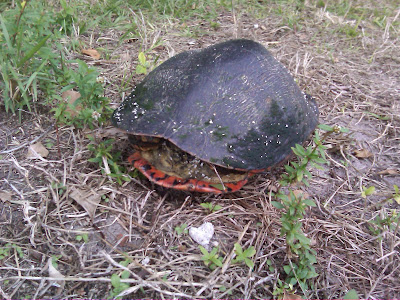 The scene: I'm taking a drive with my uncle and we're on our way to Deerfield to pick up some coffee. I've harangued him into giving me the keys to his Prius, and before long we find ourselves cruising down the main road that bisects the town.

I'm getting a fast lesson in hypermiling techniques (verdict: everyone needs to give it a try. It's intoxicatingly fun, but I digress) when I spot a lump in the middle of the center lane. A rock, I think. I'm in fairly dense traffic, so there's no way I'm going to avoid it. I gingerly line up the car to put said lump right down the centerline and hold my breath as I roll over it. Nothing. A quick check in the rear view confirms I didn't hit it.

But as it shrinks behind us, I notice something sticking out. It's no rock. It's a turtle!

I ask my uncle if I can pull over and try to get the poor thing off the road. I'm a sucker for any living thing, and I'd be ticked with myself if I could have at least tried. He graciously allows me to pull an A-Team maneuver, and I deftly cut across two lanes, in front of one flabbergasted septuagenarian, before quickly finding a parking spot in front of an adjacent big box store.

I don't have much of a plan as I bolt from the car. A logical voice deep in my head tells me that running headlong into three-plus lanes of high-speed traffic isn't such a great idea. But the rose-colored-glasses optimist in me overrules the first voice, and I convince myself that everyone will instantly know what I'm up to, and will stop their cars to help.

I spot the turtle from afar and it looks intact. By some stroke of fate, there's a huge break in traffic, so I skip into the middle lane and run full-out, northbound in the southbound lanes. As I approach the turtle, the cars are getting bigger, so I stand with my arms out, exaggerating my moves like Jim Carrey in The Truman Show (best movie ever, no?) Sure enough, everyone slows down - probably to watch the moron with a turtle fetish get himself killed - and gives me ample room to scoop the shelled being up and run for the nearby canal.

Which is exactly what I do. I'm too fired up on adrenalin by this point to even realize how heavily I'm breathing. I look for the furthest possible point from the road and gingerly set the hefty reptilian munchkin down. He (she?) is buried deep in the shell, likely scared beyond belief. I try to say whatever soothing words I can before I head back to the car.

Turtles being what they are, I have no guarantee that this one didn't head right back for the road by lunchtime. But for a few minutes that morning, it felt like I was making some small difference. As we got back on our way, I decided that would have to be good enough for now.
Posted by carmilevy at 1/13/2010 12:33:00 PM

Thank goodness you rescued it!!

Many a time either my husband or I have had this adventure...although not yet on a MAJOR highway. Glad you survived.

Oh I know somebody who's just got to read this account.

Carmi, you are a mensch among mensches... menschen? whatever. And my guess is that where the turtle was going will determine whether or not s/he headed back out into the road. They go from A to B with a purpose only they understand. But if you took him/her in the direction s/he was initially pointed, chances are that there was no further playing in traffic. A lot too would depend on the reason the turtle was in the road in the first place.

Bottom line is the odds were way bad for this guy/girl and you improved them by an order of magnitude. there's not a whole lot more you can do.

Turtles are magnetic. Really. And they go whither they are pulled. Sometimes I think if there is an Almighty that he dispatches fleets of turtles to get folks to do what you just did. Bravo. And Amen.

I LOVE this story! Not surprised you rescued it either! I tend to play good samaritan as well...one unlucky groundhog didn't survive a callous car a few years back. I called DDO Public Works/Security to have them come pick up the little guy's body - this was a Friday afternoon, hardly anyone was in the DDO offices - and until someone showed up, I babysat the body in my car, making sure no other cars ran it over. I was heartened when DDO Security showed up and removed the groundhog.

This story of survival has a definite moral - not to mention boosted morale...thank you for the picture to go with the turtle tale!