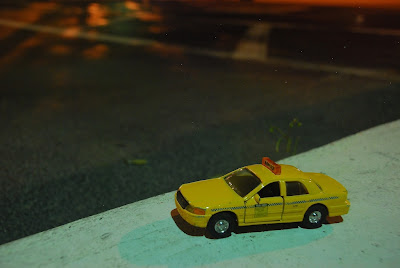 Latka's rideDelray Beach, FL, January 2012A little man's toy taxi car. A warm evening out. A long lineup that had us chatting outside for a while. All ingredients for an impromptu shoot.

My cousin suggested I make it look like it's in the road. Not wanting to use an actual road - my wife probably would have had a kanipshen at the sight of me shooting in the middle of traffic - I instead found this relatively well-lit curb in the adjacent parking lot. Before you could stick your thumb out and flag a real cab down, I was contorting myself in between an inconveniently placed stand of prickly bushes to set up the shot, my cous suggesting angles and perspectives.

Other restaurant-goers walked by and stared at the spectacle of a grown man crouched on the ground. I'm sure at least some of them were mildly amused. Or alarmed - I'm not sure. My wife, chatting with the rest of our family, was blissfully unaware, though I suppose I'm pretty busted now, as she reads the blog.

The shot was challenging, as I couldn't use the spontaneous camera-bag-as-tripod trick I had used in our Thematic "after dark" theme launch pic (here). So I was stuck handholding down to a third of a second, which allowed me to once again get in touch with my Zen side.

The results? Well, they made a little guy happy, especially when we returned his toy to him. And in the end, that's all that really matters.

Your turn: Do you attract attention when you're shooting in public?

Local tie-in: The taxi in the shot is a model of a Ford Crown Victoria, which until a couple of months ago was manufactured just up the road from us, at the Ford Talbotville assembly plant. The factory is now shuttered, its former workers trying to stay afloat in an economy that doesn't seem to have as much room for middle-class manufacturing as it once did. I found it neat that our little cousin's favorite toy had such a local connection to us.

Great picture, and not only because it's a Crown Vic (grandchild of my beloved Ford LTD.)

I like to take pictures for my weather diary, (http://www.josephsdailyweatherdairy.blogspot.com/) and I always have to go outside of the front door of my house to take a picture, I don't know if the neighbor's see me or, not but, i'm sure there going, huh....? : )