The one posed shot of the year 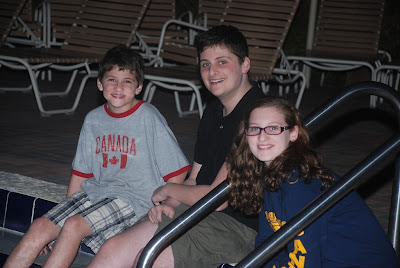 About this photo: This pic wraps up our week-long exploration of the "after dark" theme - here. Our new theme, "glow", launches later today, at 7:00 p.m. Eastern.

It isn't often that I get them in the same place at the same time. Even more rare is having them do so without some kind of mugging for the camera. Which is no surprise given virtually every picture of me at their ages had me making some kind of funny - or in some cases not-so-funny - face.

I've ruined more pictures than I can count, and am likely the one responsible for my mother's grey hair. So it's somewhat poetic, nay fair, that our children should do the same thing to me. Still, they consented to this one moment of family normalcy when I told them their grandparents would be really, really happy. I also bribed them with chocolate, and am perfectly willing to accept my unparent-of-the-year award in exchange for that moment of photographic/familial desperation.

It's rare that I do the posed photography thing. But every once in a while, it's good for the soul to freeze them in place as a reminder of how you got so lucky to have them in the first place.

I confess to a posed photograph
~

next would be a group hug, after which one of them gets pushed in the pool...

I love this picture! I'm sure Noah ended up in the pool in his clothes!