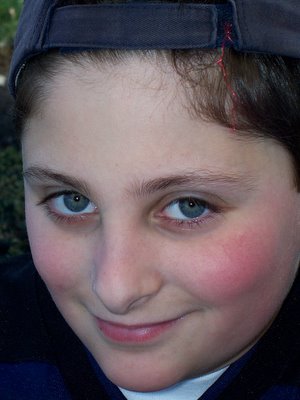 He's been a pre-teen for longer than I can remember, yet it still seems like yesterday that we first drove him home from the hospital.

As our eldest son, Zach, celebrates his 12th birthday today, I find myself asking how 12 years managed to fly by so quickly, and I wonder if I've done a good enough job trying to capture it all.

We became parents when we had him, and we learned the ropes as he outgrew one stage and transitioned into the next. He taught us to trust our instincts as parents, to have confidence in our ability to shepherd him from newborn to almost-adult - and eventually beyond. We worried at first that we'd somehow break or damage him by doing the wrong thing. But somehow, we miraculously got him to this stage, to the point that he's beginning to spread his own wings in his increasingly expansive world.

He seems to grow taller with each passing day, and will likely be looking down on his mother before too many more birthdays have passed. But as much as we try to remember what it was like to cradle him in our arms and revel in the newness of parenthood, we realize the true magic of our collective journey lies in his ability to take increasingly large steps on his own, to establish himself not only as our son, but as his own person.

Which he will no doubt do as he continues to grow. He's smart, sensitive, and caring. He's big brother to his brother and sister, who despite the usual friction that accompanies sibling relationships, look up to him and play happily in his orbit. He's a good kid, one any parent would be glad to call his or her own. Which we do. Happy birthday, not-so-little-man.

Your turn: What would you wish for Zach on his birthday?

On his 12th birthday, I wish for him to enjoy each day of this tumultuous and exciting age, and to always be able to appreciate the loving family that he is so lucky to have surrounding him.


all the best in the futer
PS luv ur blog

Happy Birthday Zach! This is such a beautiful post and tribute to your son. You must save this so that he can read it one day when he'll truly appreciate it.

I wish your son a life filled with love, laughter and new adventures. Oh, and if he has even an ounce of his father's wisdom and joy, he'll be in great shape!

Happy Birthday Zach. I wish you to grow up and be the wonderful people that your parents are. You have great examples.

(And you look just like your dad in this picture)

I would wish him security and happiness. He is about to enter the sometimes cruel age of puberty. I hope that he sees life as a wonderful advertenture everyday and can conquer anything.

Happy birthday, Zach! My wish is that he turn out just like his dad. And enjoy the journey all the way there!

I know you must hear it all the time. But wow do you ever look like your mom!


Follow your dreams and best wishes to you in all that you do.

I can remember my 13th birthday. I got a bicycle and I rode it everywhere. I wish Zach gets wisdom, health & wealth (in the future). Grow up slowly, u still can do all the kiddie stuff.

First, Zach, I wish you a very happy day in which your wishes are fulfilled. Then I will echo Erin, and tell you to appreciate your mom and dad, because they obviously love you and your siblings very much and have your best welfare at heart. One can ask no more and no less from a good parent.

And Carmi? He's gorgeous (but don't tell him I said so!!)

We're both blog-celebrating our twelve-year-olds this week -- awesome! My wish for Zach is that he keep a clear head and an open heart and attain as many of his parents' qualities as possible.

Happy Birthday Zach. wow, do I remember 13, yes I do. Wisdom of the ages speaks and says, enjoy your youth because if we dont stop and look around we might miss something.

This is your year of coming of age. That is a big step for you young man, faith is very important to who we will become. And you are your father's son and you should be proud.

Happy Birthday to Zach! You know, he looks A LOT like you. Wow!

What a gorgeous boy! Happy birhthday, Zach. This year, I wish you the happiest memories. I remember that age, hang on to every moment. Seriously.

Happy Birthday Zach. Your Mommy and Daddy love you very much!!

I spoke a little too soon, 12 not 13, oops, my bad... that oldtimers is settin in my friend. I had a single thought on my mind when I wrote that reply. Did you figure out what it was?

sometimes I can be extremely silly for no apparent reason.

Happy Birthday Zach...wishing that your wishes come true. And that you will find happiness and comfort in the life you will lead.

btw, I love the rosy cheeks.

Oh, I love this post. As the mother of an 11 1/2 year old, I can so relate and agree with what you've written.

I can't wish very much for you because you already have a great treasure in your father (and I'm sure your mother too), but if I could grant you one thing is is the self confidence to pursue your own dreams.

I would wish for you and for him that his teenage years aren't too turbulent. Michele sent me.

Happy belated birthday to Zach. He looks to be a blend of your features and your wife's, Carmi. Lucky fellow!

I can't even remember anything from when I was 12 but I suspect top on my birthday list was a skateboard. That was the big thing around then (1973).

Great picture of your son, by the way. Portraits aren't easy to do and this one just brims with personality!

What a sweet birthday tribute for Zach. Happy Birthday a little late Zach. 12 is a great age to be, I hope that you enjoy this year to it's full.

My wish is simple. May you always be able to see with heart first and then your eyes. Don't lose that childlike wisdom even as you grow into manhood. There's something to be said for the way a child approaches new things with an open mind.

Happy Birthday, Zach! I wish you peace in your heart and happiness in your life!

For his birthday, feeling treasured, loved, understood, trusted, confident and playful, all of which I'm sure he got.

I'm late on this...
I wish him a life of love, friendship, caring and a world that no longer wars

Savor these moments and years, Carmi. Because as my blog of this past Tuesday shared....my daughter had her 42nd birthday and I have no earthly clue where the years have gone since I held that newborn.
And for Zach...I wish for you in this 12th year all that you wish for yourself. With the parents you have...you're destined for greatness, but only you can make it happen.