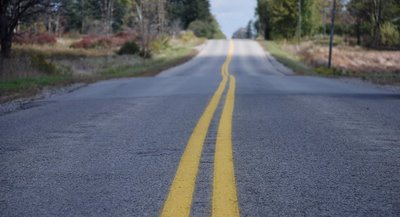 I faced an interesting conundrum with this one. I really wanted to break out the tripod so that I could use a longer exposure - and hence a smaller aperture for greater depth of field*. Problem was, I was concerned about being flattened by a passing vehicle. It's a country road, so there isn't usually a whole lot of traffic. But all it takes is one to thoroughly ruin your day, and it's easier to scoot to the side of the road if you're handholding than if you're dragging a camera on a tripod.

So handheld it was. I shot quickly before retreating to the safety of the shoulder. In the end, I rather liked the final composition; the narrower DOF makes the distant road look more distant. Which tells a better story. I think.

Your turn: Why do roads beg to be photographed? Where is this one going?

*See here for some photo-definitions.

I like the 'roughness' of this road. It seems like it's supposed to be going straight, but it's just off, and so the further along it goes the more it strays.

I think roads represent something happening or about to happen. In this case, Car-Me Levelly.

I want to ride on this road...

I think roads beg to be photographed because there's always that "where will it take me?" thing that goes through your head when you see it. To me...that road is going to take me to some smooth twisties that aren't too tight, don't roll through hills, and are just perfect for this newby rider... Miles and miles and miles of smiles :)

I love me some depth-of-field, but I like the narrow DOF in this image; it's more true to life. The events closer in time to the present moment are much clearer while events in the distant future are more blurry and vague.

Are eyes are naturally attracted to lines, and even when roads curve, they still look like the tracks of a pencil on a page leading us to the end of a maze.

Most people would probably say it tells the story of an exciting journey ahead, but for me, and this probably has something to do with the space I'm in now, it represents how far I've come in my own life, and what I've accomplished.

Michele sent me your way Carmi. Roads mean to me the way forward, the future, I can't help it but follow them...nice pic, as always :)

I hear that road is covered in SNOW today, Carmi! Poor guy... I can't believe you have to ride your bike in it. I hope the snow is melted by now.

I love photographing roads, too... But I have no idea why.

Have a terrific Friday! Michele sent me today.

i love how part of the road is under cloud cover and the distant part is in sun.

michele sent me this time.

Queen of Light and Joy said...

Why does anything bed to be photographed. I feel things calling out to me lately. I am on a total photo kick. The past week I must have shot 4 gigs worth of shots. (Theres some of my pics up on my blog right now) For me, its bridges expecially that just beg to be photographed. They are similar in roads in that they are vessels to get you from one place to another. They are a journey in themselves.

Michele sent me back :) I still wanna now what's just past the horizon...more long road? Twisties? Something fun or scary?

roads, paths, rivers and streams, they all led our mind somewhere else.

This road represent where I came from and I am only looking back for a second. In front of me is an on ramp to the interstate...Maggie

Country roads...you never really know where you will end up. We all love to jump in the car and travel on the roads that lead away from the highways around here. You would be amazed at some of the things we have found. I know this sounds silly, but this shot brings up some really good memories.

Roads beg to be photographed because they take us to unknown destinations and lead us to our dreams... Ever noticed how many times a road will be in a dream?

That road is going to a nice restaurant with a view of the mountains. :)

Roads are metaphors obviously. That's why we love them.

(I think I lost my comment, so reposting)
Great shot. I think the road leads to a nice cozy restaurant with a view of the mountains.

Roads are symbolic to us, obviously, so I think that's why we like them, like photographing them.

It's been a while since I've commented here. I love pictures of roads. They have a sense of movement, possibilities. But from the other end, accomplishment from someone before me. There is this road we traveled in China. It started off as a dirt road along side a mountain. But over the years, we would pass by workers paving this road with cobble stones. Laying the stones one rock at a time. It was an amazing thing to watch. I wish there was a picture that could give a sense of the magnitude of the job! So for me, I guess roads symbolize someone who has gone before and made my path a little easier.
-meandthefam-