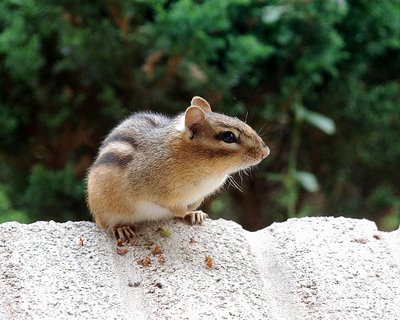 Some days, I absolutely love living in a mid-sized city with a perpetual inferiority complex. London seems to be perpetually trying to prove that it's world-class, that it ranks with the biggest and the best, that is has the heft to attract big stars and assert its influence on the rest of the planet.

We did, after all, recently hold a Paul Haggis Day to welcome our prodigal, Oscar-winning son back home. This was front-page news for days as everyone from politicos to journos fought to wave the I'm-with-London banner. It was amusing to watch, but was it news? Although I was a die hard Due South fan, I concluded not so much.

Inevitably, we're so intent on proving ourselves that we end up looking small town-ish. True stars never have to act as such. They simply are, and the rest of the world comes to them. It's a lesson this city might want to study.

All of this makes for an interesting backdrop to the latest debate to rock our town: that of our official city rodent. There's a move afoot to have the black squirrel declared our official mascot. The letters pages in the paper have been filled with pro and con opinions about what this would or would not say about our city.

So while the kids were getting haircuts yesterday, I noticed a chipmunk on the balcony outside our hairdresser's home. I had my camera with me (y'all know me by now, right?) so I captured the little critter before he (she? I can never tell) skittered away.

The debate over official civic vermin can continue. Something tells me this little munchkin couldn't care less.

Your turn: Does your city/town/county have a similar complex about its place in the world? Should animals be held up as mascots, or do we all have better things to do with our time?

i think it's a great pic, a chipmunk on cement with nature in the background, love it!
i don't know if my city has a complex or not, i know the last few years i've started to feel it's become too big for me, i'm the one who is having the complex about being lost in it. i like the idea of having an animal or something as a mascot, it helps tie kids into their own cities, giving them something they can identify with.

Nice photography. But I think I prefer Montreal bagel (St. Viatur are the best, btw) to rodents. Don't you think all of Canada is a bit like London in that way? I can't watch a movie set anywhere in Canada where half the audience doesn't twitter or whisper "oooo, that's city hall, ooo that's the market".
Hi from M's.

My town is so small we can't afford a complex :-)

Our only claim to fame is a pub shooting and a murderer killing himself in our flower shop....

But I adore your crittur - perhaps we should let the critturs decide which town they are mascot to? I think the foxes here would win the vote here.

And your final question? Keep on stalking those critturs, Carmi!

I love chipmunks, and black squirrels are pretty rare around here (we have boring grey ones) so I think that would be a cool mascot.

As far as mascots go, a squirrel is better than an APPLE, dontchya think? ;)

Although with Paul Haggis as your town celebrity, maybe a sheep is a better choice?

You should continue to stalk them as long as it's only to take photos of them. hahahah

My town is too small to have a mascot,but our high school's mascot is the burro. This would probably be the town's too since we have a very active "adopt a wild burro" program here.

Photograph whatever catches your eye and whatever moves your soul. I love the chipmunk photo, but it is your fancy that must be tickled. . . so to speak:)

Please do stalk small animals. :)
I have always liked mice, chipmunks, squirrels, rats, etc. Rodentia in general. And why not through in a rabbit or a skunk? ;)

Living in a distant subburb of LA, there is no small town complex. In fact, the subburbs cherish their smallishness... their identity, without aspiring to be what the big brother/sister is. But on the other hand, aspiring is a great thing. City beautification, etc.

I live outside Boston, Carmi. And whereas Boston constantly suffers from comparing itself to New York, my hometown is unique and happy to be that way.

What a great chipmunk shot! I love those little guys.

I think it's darn cute, but I don't think any city needs a mascot.

My city is known for being a den of corruption, not to mention the birthplace of Frank Sinatra and, supposedly, baseball. Now it's mainly known as a place where developers are commandeering space for the use of condos for rich investment bankers. It's a pretty nice square mile city though in general, though. . . and On the Waterfront takes place here!

Oh yes, do continue to stalk small animals. I think in New Zealand our complex about our place in the world centres on sport. If we don't get about a gazillion medals in the Olympics, for instance, everyone wonders what went wrong. And i'm always thinking "for heavens sake, work it out mathematically, we only have four million people". Of course there's always the "trying to outdo Australia" thing - just like Canada and the US, I suspect.
Of course we do tend to make a huge thing of people like Peter Jackson, and the whole Lord of the Rings movie thing. The second top non-fiction best seller here is the "Lord of the Rings location guidebook". (The top bestseller is a cookbook).
Michele sent me.

My town has a real self image problem. We are the only option up here, really, but it's always a fight to get people to stay, and the grumbling and muttering never stops.

As to the city complex thing, I don't think that Phoenix has an issue, but then again, it's so hot out here that no one seems to have time to make a big deal out of too much. Then again, maybe I just don't get out enough!

Definitely a girl chipmunk, Carmi. Just look at the way she's eyeing you! There's a little twinkle in her eye that wouldn't be present in a boy-chipmunk.

I don't live in a town and as far as I know, none of the towns nearby have an animal mascot. If they do, they're not pushing the idea. The town 20 miles away, Durham, does have a ballteam with a animal name. The Durhan Bulls--so that might count.

You know I love "critters" so...for me you could post photo's of critters all the time! This one is expecially wonderful...There is this vulnerable thing about him/her....So very sweet...!

If you have a little time, drop by...I've got some "critters" of my own that I posted!!!

Okay I had a big AAAHHHH when that little sweetheart popped up! How precious.
I love small towns.......I wish my own wasn't quite so "backward" but at least it is a really safe and beautiful part of the world. And I am not so far from some very cool towns so I guess that makes it okay.

Atlanta is often referred to as the New York of the South, but it's not. We have no appreciation of historic buildings--even those built after Sherman burned his way to Savannah--and our roads and green spaces need work. However, we are infested with great restaurants, art galleries and theatres. We're a city that shows greatness when we don't try to do so. The Olympic Games were a humbling experience.

I've nothing against animals as mascots, but choose exciting ones. Our high school mascot was an elk. Do you know what it's like to have an elkhead on the wall of your gym? Should animals be held up as mascots, or do we all have better things to do with our time?

I see no reason why small animals should escape being stalked by someone. The rest of us have to put up with the paparazzi, why not rodents?

Love the picture! Chipmunks are one of my favorite creatures! WE always had bunches of them in Minnesota. My oldest son when he was a young kid, had them trained to sit on his shoulder and eat peanuts.

Kepp up the critter hunting with your camera!!!

Love the small animal stalking. Someday, got to get one of these cameras.