She looks to the sky 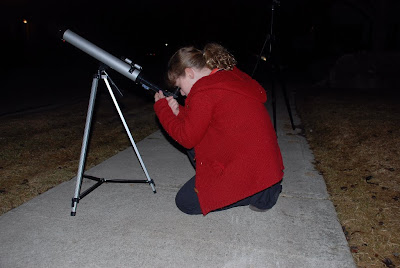 Watching the heavens
London, ON, March 2009
Click all images to enlarge
See below for descriptions

The scene: My daughter asks me for help with a school assignment. She's supposed to go outside after dark, look skyward, and write her observations. Given the modern-day uber-protective parental views on kids going outside alone, she asks if I'll accompany her. But of course.

Over dinner, we discuss what she expects to see when she gets out there. The moon? Venus? The Big Dipper? She lists them all off as if they're endless opportunities just waiting to be discovered. She's excited. So am I.

As is her little brother, who begs to come along. She's not pleased at the prospect of an eight-year-old, a boy, no less, bouncing around her while she focuses on work. After much negotiation, some of it loud, she relents, but only after extracting a promise from him that he'll be on his best behavior. She turns to big brother and asks to borrow his telescope. Zach generously consents.

Because I'm never satisfied until I've completely saturated every experience with as much technology as I possibly can, I suggest we look up the ISS and shuttle orbits on 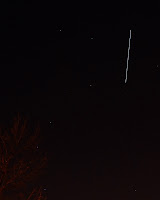 line. If we're lucky, we may see an overflight or two. Sure, they're just dots in the sky. But what dots they are, and I figure it'll make a routine assignment that much more memorable for her if all the figurative stars align.

As I pull the data down on my laptop, I realize tonight's going to be a great night to scan the heavens. The upcoming ISS pass is slated to be the brightest and longest viewing oppoprtunity for at least the next ten days. Dahlia bounces into my office and we review the numbers together, just to be sure. I explain what they mean, tracing the path with my hands as I try to contain my excitement. High fives are exchanged. The dog looks on quizzically.

We head outside 15 minutes early with all our gear. I preset the camera as best I can and the three 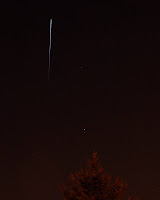 of us banter about what we're about to see and what it means. We talk about the people living on board, how the shuttle Discovery (STS-119), which we'll also see about 20 minutes later, is chasing the mother ship and will be docking with it tomorrow. Noah skips up and down the sidewalk, counting down the minutes and asking if the ship makes noise when it flies by, and if the astronauts will be able to see him wave.

I use my BlackBerry to send out a tweet via Twitter, asking if anyone else out there is watching the sky. Within minutes, we're getting answers from just a few blocks away, and from across the continent. The kids keep asking me to check the time, calculating the minutes to 8:47 as if that's the only math problem that matters. Right now, it is. 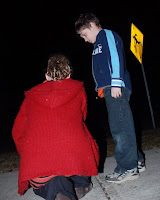 Suddenly, the dot appears in the sky right where the prediction said it would be. They chatter excitedly as it arcs over our house and continues to brighten in the inky black sky. We double- and triple-check that it's not just an airplane - no flashing lights, and the coordinates seem to match up. Dahlia watches through the telescope. I work the camera to grab as many long exposures of the pass as I can before it disappears into the night. Funny how a ship that never lands is visible only for blinks at a time. 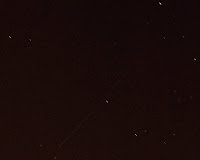 how many people are on-board. And then, as quickly as it appeared, it slowly dims, then disappears in the eastern sky. It's flown right over our house, and right into their imaginations.

Alternately chilled and excited by the experience, the kids head inside to share the news with mom. It may have been a mere dot in the sky, but as I gather up my equipment and watch for Discovery to fly over, I hope it helps them form a memory they never forget.

Your turn: Making a memory for the folks who matter most. Please discuss.

Sadly here in the middle of the urban sky all that's visible are the brightest stars and that 3/4 moon .. the lights from the buildings overwhelms the night skies ..ah to be somewhere open ....

Carmi, your kids are sooooo lucky!

I used to make memories for my grandchildren with my art box, in which I still save all manner of paper, cards, crayons, markers, scissors, tape, glue, etc. They can create to their heart's content. Alas, they are getting to the age where they consider that juvenile.

Awesome experience, Carmi! It reminds me of the time my mom kept us awake through the night, to watch the lunar eclipse. Huddled on our balcony in blankets, my brother, my mom and I watched the moon transform, the orange glow of it, and through the binoculars my parents had bought in Hong Kong, we were able to see it as though it were closer than our hands. It was chilly, but we were not moving for a moment.

My mom had read up on the eclipse, so she was able to tell us the phases as they happened, and it was an experience I never forgot (I must have been a teenager - can't remember exactly).

Through the years, I have replicated that experience for my boys. More than once, we have sat out on our driveway, watching lunar eclipses, through the night - and yes, I have kept them up on school nights till the eclipse was over somewhere around 1 a.m....it was just worth the time spent together to have them tired the next morning.

Two nights ago, Joshua - my night owl - was STILL not in bed. I was, however, and reading. He came into the bedroom and informed me that there was a surprise lunar eclipse happening right now. As his window is usually the one through which we can see these events (for some reason, it's always in that part of the sky that the eclipse happens), we stood for a while, watching, until the moon disappeared. Then I informed him he'd be eclipsing in the morning if he didn't get sleep.

But it was a special moment, and your post reminds me of the times I've shared with my little astronomers too. Special pictures, too - thank you for sharing!

Carmi - seems like it was a great experience. I got to see the Shuttle take off just last year from CC. Really cool. If you really want to check out some cool astro software check out www.worldwidetelescope.org then you can zoom around like Buck Rogers. :-) Best.

What a wonderful time to spend with your children and you wrote of it so beautifully!

A couple of years ago taking my daughter out in the country to take pictures of a big red harvest moon...and then last year keeping them awake to watch the eclipse..that was fantastic! We had a beautiful view from their bedroom window! I love those things with the kids..I, like you, enrich it with extra information until eventually they roll their eyes and say "come on"!

by your writing, I felt transported to the sidewalk alongside you.

this brings back memories of many nights spent outside watching the sky. most of them involved hot chocolate with extra marshmellows because mom said that gazing at the heavens required special treats. there's just something magical about being outside at night.

Your children will certainly remember this. No doubt about it.

My girls are now 21 and 20 and it appears that what they remember as most treasured are certain books that we read to them over and over again. They still recall the various forms of animation we employed to keep them entertained and enchanted. Sometimes we recall an especially vivid passage and it makes us feel so much in love all over again. In that special way that parents can with their children.

It's times like this when you start to contemplate whether or not it's really all that impractical to plunk down $6800 (USD) for that 400mm f/2.8 lens. I know, I know... that's 2/3 of a semester's tuition at a state university for my son, but still...

But for now, I guess I'll have to stick to inner space. Like once more from the kitchen...

This brings back so many memories. Waking the kids up to see comets after midnight. One time we were in Cocoa Beach when the shuttle was to be launched. We had to wake up at 3 a.m. and go out and watch. It was an experience we'll never forget. Enjoy every moment.

That is SO awesome!! How exciting for you AND them! I felt as if I were right there with you. Excellent narrative.

What I've found to be interesting about creating memories for my kids is that it's often the simple, mundane things that they remember the most. They'll reminisce about something I barely recall, as if it were the best and most wonderful memory ever.

So there are certainly wonderful opportunities like the one you had with your kids, there are also those that spontaneously happen, but live on in our hearts forever.

These are the best moments. The ones you'll call back. They will too. When the girls were young we saw the space shuttle lift off while we were in Fla. Once from land, across the causeway (my favorite) and once from a boat in the water. So amazing.

That is so cool. Beautifully done.

Nice work Carmi - thanks for sharing.

oh, you've reminded me. this week is skywatch week. Now I must post something tomorrow.

When was the last time someone told you that you were a cool dad? 'Cause you are.

This sounds like great fun. We were watching a Geostationary whilst we walked back from a late evening a few days ago. Clear sky bright moon and all.

This is a memory that the kids will savor as magical, Carmi! About as technical as we were in school was to take a shoebox outside during an eclipse and hold it as waist level, using a hole in the box to calculate movement, as I recall. Telescopes are way cooler! :)