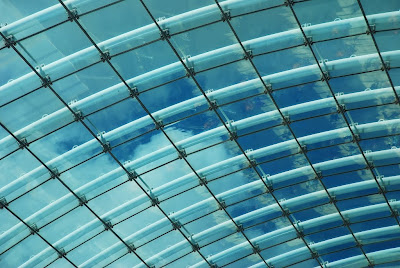 About this photo: What's your favorite photo of the year? Click here to share yours. We'll be doing this through New Year's and beyond.

The average modern-era shopping mall was built for one primary purpose: To separate you from your hard-earned cash. I'm under no illusions when I walk through the doors of one of these retail temples that every architectural element is there to support that one, bottom-line ideal. No matter how pretty it may seem, there's a profit motive lurking in the shadows.

As cynical as I seem to have become, I still rather enjoy the occasional road trip to a mall. There's a certain energy to these places, a buzz that can be , if not outright infectious, at least a welcome diversion from an otherwise yawn-inducing Sunday afternoon.

On this particular Sunday afternoon, I had come to Yorkdale Mall in Toronto with my brother-in-law. We were Applenauts in search of the Apple Store - he needed a dongle for his iPad, while I needed to simply drink in the atmosphere of the place. Before we even got to the mythical home of Steve Jobs, the atmosphere was already perking our mood. The mall's undergone some serious expansion and renovation in recent years, and the showpiece is a glass-covered walkway along the eastern edge.

On a sunny day, it's little short of spectacular, and it's what attracted me to it in the first place. The resulting curved-geometric shot is one of my favorites from 2010 because it's starkly simple and bright - just the thing to look at on a dark, Canadian-winter afternoon.

I doubt I'll ever fully discard my cynicism, but there's nothing wrong with spending some time in a place that looks like this, feels alive and provides just the kind of backdrop for an adventure with someone who gets it.

The same as the appeal of mirrors, I suppose- a sense of freedom, openness, and largeness.

I haven't been to Yorkdale in a while... should check it out.

Ha! You put my thoughts on "the Mall" into words perfectly.
Some great architecture....but not where I enjoy viewing it. The capture here is quite spectacular...wonder how they got the money to pay for such a ceiling;)

Never been to this mall but the roof looks spectacular from that photo. But, yer i agree with you cynicism.

Sadly after watching my husband playing the computer game Dead Rising I no longer see shopping centres in the same way. Watching people mindlessly shuffling away from shop to shop make you realise how game designer come up with the idea. I end up people watching rather than marveling the stucture. Hum I ganna have to have a good look at ones I visit now.

I love this photo. I had to think about what it is that I enjoy or like about glass and what I came up with is that I love the protection which glass provides, keeps me covered on a rainy day but allows me to look out, safe yet sated. I also love how things reflect off of glass, I have no idea why... I just do.

Both your cynicism and enthusiasm have earned my sympathy. Beautiful bloodsuckers, them malls. :D
India has quite many of these architecturally marvellous malls now, however my state doesn't have many. But among the few it has, the South City Mall in Kolkata is my favourite in this state, just because of the awesomeness of the outer walls. I've never seen a wall full of different ADS of all things look so artistic.