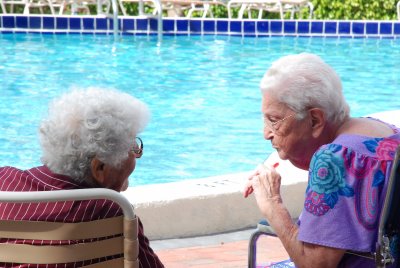 Picture to be named by...you (see below for details on Caption This, my new weekly feature)
Deerfield Beach, Florida, January 2007

The woman on the right had been sitting quietly beside the pool for quite some time. Her attendant had brought her in her wheelchair to enjoy the sun, and sat dutifully behind her. There was no way of knowing what she thought of our three noisy kids, splashing around the shallow end. Perhaps they brought back some distant, fond memory. Perhaps they were merely an annoyance to her, an unwelcome disturbance to her precious solitude. Either way, she sat impassively in her wheelchair while the world moved along around her.

I idly thought of capturing her loneliness in a photo, but by the time I got out of the pool, another resident had joined her for a chat. The original story of solitude was gone, replaced by something entirely different.

Here's where I likely crossed a line with my camera, but I thought an indirect angle would be better than simply walking up to them and shooting. I surreptitiously stood behind them from quite a distance and took carefully considered pictures. I had no idea what they were saying, but here's where you come in...

Your turn: The very considerate Maryanne has suggested that I post pictures and ask my kindly readers to supply the corresponding caption. She has inspired me to start a new feature on Written Inc. I'll call it Caption This. Every Sunday, I'll post a new image and invite you to name the picture. The next Sunday, I'll weigh in on my favorite submission when I post the next one. I have no idea what the reward should be - perhaps you can help me there. Maybe being added to my blogroll. Maybe my everylasting gratitude...go nuts!
Posted by carmilevy at 1/14/2007 05:02:00 PM

Email ThisBlogThis!Share to TwitterShare to FacebookShare to Pinterest
Labels: Caption This, Vacation

Hi Carmi, Michele sent me back.

Great idea adn I love the conspiratorial nature of this photo. I think they were plotting something!

"You go that way, and I'll take the other side and lets grab all their clothes!"

Caption: Throw Down in Miami

Dialog: Lady1: Is that licorice in your hand, Margaret?

Lady2: You just try and take it from me this time, Saddie, and you'll be in a world of hurt!

Lady1: But you don't even have your dentures in...you can't eat it.

"Madge, I'll give you 10 bucks if you flash your boobs to that Canadian dude over there."

I am far away and missing my friends back home Carmi. Perfect timing. I loved loading this picture.

It reminds me of how dear my friendships are and how I pray that I will be blessed enough to grow old with all of them.

What a sweet shot this is...

Your next Florida trip will have to be the WEST coast of Florida... we have the best beaches around Pinellas County... :o)

I'm not good at on the spot creativity. If I come up with a good title I'll come bak. I was going to say "hey , that's me and (insert name of another bloger) at the pool in Deerfield, but I didn't want to make anyone angry!

I'm not good at naming these either, Carmi, but I love the photo and the two women look conspiratorial about something...LOL

Caption: (woman on right) "I tell ya...I was TOO Miss Bathing Beauty 1940!"
Here from Michele's and great photo, Carmi.

My caption: "Just think, Mabel... if we were still in Nebraska, he'd be wearing a snowsuit instead of a speedo. Don't you just love Florida?"

"I knew I should have taken that left turn at Albuquerque."

I like this idea - and being added to your blogroll would certainly a feather in one's cap!

Michele sent me, but you know I would have wandered over here sooner or later!

" Did you hear? Joyce got caught cheating at bingo last night. Must be her new attendant, he is a terrible influence on her."

I think they where enjoying Life ;)

Michele sent me back. Hmmm... your sidebar is missing. Did you do that so we couldn't see your blogroll and would thus want to be added? tricky...

Say, how long is the flight from London to Florida? How'd the kids handle it? Did the ladies ever realize you were shooting at them? :-)

Carmi you have made me miss my Grandma. Thanks for the nudge down memory lane.

Michele sent me back, Carmi, so I could read everyone else's captions. You got some good ones!

I'm afraid I don't do captions, as a rule. I seem to be missing the caption part of my brain. By the way those flip flops are called jandals in New Zealand. I have no idea why.
Here from Michele's.

thank you for your comments, Carmi. I may send you an email with some questions. This is a totally new path for me and a bit scary. But I think I have to do it. I can't imagine taking 12.00 an hour and wondering how it would have gone if I had been gutsy enough to jump in. If it doesn't work, I can always take 12.00 an hour for some other job in 6 months....

Hey Carmi! Love this photo and the one of the flip flops. Since we're having a mini snow storm, it's really "warming" to see these images.

Thanks for stopping by. Have a great day!

And you have to put up with another visit from me, Carmi! Michele said to come and tell you that the meet n' greet is extended - as if you didn't know.

Carmi- Thanks for visiting my blog and for your kind words, it is appreciated...

"Okay, you go tell the pool boy you dropped your glasses in the pool THEN I check out his tush... okay we both check it out... okay okay, we both dropped our glasses... oh hush, here he comes."

I think we're tangoing now, Carmi.. this is my, what, fourth visit today? Congrats on getting Michele to extend!

I have no caption ideas...but love the picture...reminds me of my grandma :)

Hi Cami,
I love older people, especially if they have a great sense of humor and are also a bit mischevious! Here's what I think they are saying:

Lady on the left:

"Nothing empties out a pool faster than secretely dropping a Babe Ruth candy bar in the shallow end next to kid with water wings on! So, noow that it's finally quiet, tell me again about the year you worked at the emissions plant during the war."

I am so honored you decided to give my idea a try. I love the captions you've received so far. This is fun and I hope it really catches on. Keep up the good photography.
Toodles,
Maryane

Hi Carmi I love this idea, about the picture, it's so nice so many years past by i see it looking at the pure white hair, the wrinkel's at their beautiful faces I think they just enjoying the sun .

Love the photo! I'm not good at caption either... but I like Terri caption: "I tell ya...I was TOO Miss Bathing Beauty 1940!"
Very good caption!

"Would you believe my carer thinks I'm 'over the hill!' HUMPPHH!!!"

I don't suppose mine counts as a 'caption' but I think it has the right 'feel' It's certainly about death and about getting things into perspective!