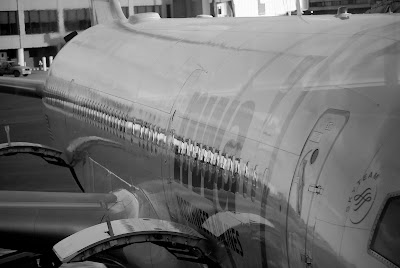 757 at rest
Logan International Airport, Boston, MA, January 2007 [Click to turn it into a Jumbo]

Those who know me are well aware of my fascination with all things that fly. Unilike most folks in this post-9/11 world, I still enjoy getting into a plane and leaving the planet for a little while, especially if that plane is bringing me home.

I have a hierarchy of commercial aircraft. Some, like the Embraer E-Jets and the Airbus A-320 family, rank very highly. The lowly old DC-9...not so much. I've got a soft spot for the Boeing 757. On Thursday, I flew this one, a Northwest Airlines 757-200, from Boston to Detroit. While waiting for the ground crew to get the plane ready for our flight, I snapped a few quick images through the thick glass windows of the terminal.

Why the 757? It's subtly pretty. It seems to sit relatively high on its landing gear, and its thin, long fuselage stands out as it moves across the tarmac. It was a highly successful design for Boeing that marked its move into a new generation of fuel efficient, sophisticated designs. That it's the flying equivalent of a sports car - same engines and wings as the heavier, wide-bodied 767 in a much thinner, lighter airframe - makes even the most routine flights a touch more fun.

In this angle, the curves and the surface detail defy the conventional definition of the airplane as a mere tube. I wish I had more time to capture the scene.

I don't think I've taken a picture in an airport except for the one I took in Paris in Oct. The architecture of the terminal begged for a photo to remember it by. Michele sent me tonight, Carmi.

For one summer, I worked in an airport in Germany. I took a number of pictures, but I don't think I got any of actual aircraft. My snaps tended to be more of a pictoral essay on all the armed guards they had throughout the airport (this was over 20 years ago, long before 9/11). It struck me as rather unsettling.

But the image of a plane on the tarmac, especially if it's at sunrise, seems to fill me with a thrill, a hope, an expectation of "Tomorrow" and "Adventure" and all the possibilities that await us. Then again, that could just be my Disney mindset at work...

Travel is one of my passions. There is something exciting and invigorating about airports to me. I think it is because it is a chance for us to as you said...leave the planet for a bit. It is very exciting going on a new adventure.

I have always been captivated by planes and all the sky. Personally I like the 777. When I see that plane on my itinerary it means my flight home (whether it is to or from the States) is going to be a comfortable one. :)

We have some friends that live in the flight path of Heathrow Airport where every 90 seconds planes land from all over the world. I always wonder who is on those planes. When we go there for a visit you always find me in their backyard with a crick in my neck. They pass over about 1000 feet up. What sounds they make. It gives me goose bumps. For a better idea of what I saw on one of those days go to my archives...click October and go to post called 747 Big!

As far your pic...my husband and I love it. He loves planes too. We really like the reflections in all the windows. Nice one Carmi.

I've taken pictures in airports, but they never seem to come out with the mood that I wanted to capture -- the motion and the hurry.

I like being in airports, the random focus of total strangers in transit. How you're among no one you know, yet you pay acute attention to people individually as you make your way through the crowds. The little things that stand out -- the color or style of their hair, or the shoes they're wearing, or the crooked smile on the face of another tired traveler.

I love to take pictures of people getting on and off planes. Especially old fashioned planes that let people debark out the back-end. I got a great shot of my friend coming out the back of a plane in Egypt. It looks like she's walking out the butt of the plane! See Carmi, I'm just sick like that!

Hope you are having a nice weekend and staying warm!

Michele finally sent me to see you, Carmi. I guess I could do it on my own but I'm used to having 3 or 4 visits a weekend to catch me up on your whole week. I guess that's at an end! Now I'll have to be more proactive with your blog.

When I first saw this picture I thought it was a mite plain but when I saw the big version--and it's HUGE--I changed my mind completely. It's so visual and tasty with all those gleaming angles and I kept thinking of railroad car style diners.

I've never taken a picture in an airport, Carmi. I guess I'm too self conscious in crowded environments to do the picture thing and also I'm rarely in airports anyhow.

I love this pic, the angle makes the plane seem ginormous (my son'd word, he was impressed as well!)

I like to see pictures in the airport of people on the move, especially when they catch the streaky, movement effect. It just makes me feel more, calm, I guess!

I think (though I cannot recall) that the 757 is nicknamed "Daddy Long Legs" by some. I know one plane is and for some reason this one rings a bell.

I love the perspective in this photo! I love the smoothness of the metallic surface and the way that the light falls on it. You have captured the scene well but also cleverly made it look peaceful too.

I'm afraid I can't think of any aircraft that looked nicer than Concorde. As a child my home was under the test flight path and she became a familiar sight. It was extremely sad when she stoped flying. I was there to see her final flight too.

Going back a little way - I've always had a soft spot for a Spitfire and when I was a child made lavender bags to sell to raise money for the Spitfire Fund in WW2. Sorry no photo.

They are on a different computer, but just thinking of them is fun. I have one of the wing over Anchorage just before we landed, and one of my 3 year old niece looking out the window in the terminal. Thanks for reminding me of them.

That's a cool picture! It doesn't even look like you tokk it through those thick windows at the airport. The only pictures I have taken at an airport are of me and my family on the plane, or attempted to take some pictures out the window of the plane.

I have some pictures in airports but nothing with the alure and majesty of your picture it is truly serene or is that just me ?

Since hubby is retired airlines, I have quite a collection of aircraft photos....lol
Have you flown the 777 yet? I'll be flying that to Paris....amazing aircraft!

Carmi I have a fascination with aircraft as well. I've never laid eyes on an airplane I didn't think had some sort of intrinsic beauty.

We have a small county airport just a few miles from our house. I love riding my motorcycle over there and just watching the planes flying in and out. I can easily spend an hour just sitting on my motorcycle and watching.

Michelle sent me but you know I'd be here anyway.

The glass was pretty clean!