Six months in a leaky boat 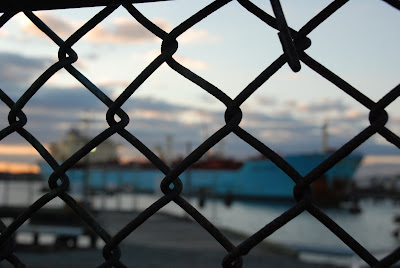 Thrifty car rental's lot isn't at Logan Airport proper. It's about a five-minute drive north of the terminals, right beside a navigation channel where, as luck would have it, a rusty old freighter was anchored when I first got off the shuttle bus and walked into the building.

After I signed my life away and was given the keys to what could very well have been my grandfather's car (a cream-colored Chrysler 300), I asked the attendant if he would allow me to walk to the back of the car lot to take a picture. His eyebrows furrowed in the universal "you're insane" pose, but he good-naturedly asked his supervisor. She happily shrugged her shoulders and said she hadn't done anything all that interesting all day, so this seemed worth a shot.

Out we went into the clear, late afternoon cold. In a very friendly, Boston-gregarious kind of voice, she asked me why on earth I wanted to take pictures of a boat. I gave her my 30-second I'm-addicted-to-photography speech before we arrived at the back fence. I took my camera out and shot through the fence. She noticed a hole in the fence and suggested I try to shoot through it. I carefully navigated over the icy ground and got the second shot in this sequence.

I showed her the images on the camera's screen - another thing I love about digital - and she chatted amiably as we headed back inside. In a strange city far away from home, I had somehow managed to leave someone with something she likely wouldn't forget for a bit. Neat.

Your turn: Connecting with strangers in a strange place. Please discuss.

More background on the boat: I dug up a couple of links that share some more background on this ship. The Romo Maersk is a Danish vessel, built in 1986 to carry chemicals and oil. When I juxtapose the rust over the kind of cargo she carries, I'm left with a bit of a sinking feeling. At least she's double-hulled. Anyway, enough of my eco-whining. Neat links are here, here and here.
Posted by carmilevy at 1/31/2007 11:44:00 PM

I like it because when people ask us about missions we give them a picture of a chain link fence. You never know where you are meeting someone in their spiritual journey. If you look at someones life like a chainlink fence you could be the first chain, middle or the last in sharing with them. It doesnt matter where you are on that fence just that you share your stories and be yourself. God takes the rest...there is a real freedom in that I believe.

When I look at your picture I am reminded of all the things that make up my chainlink fence...

And as for your question...there is no better way for me to connect with strangers than through my camera lens. That is why I love it!

I meant to add that I have found that people of different cultures here let me (with my camera) into moments in their lives that with out a camera I might not be welcome....

I find that interesting.

All I have to do to connect with people is to sit on a bench. Someone always comes to sit and talk. I suppose if I had my camera with me, it would happen even more often.

The hahbah is a great place to take photos :-)

Saying hi from Michele. nice to be back.

What a nice photo of a rusty ol boat.

I'm shy so I seldom talk to strangers but somehow they find me. Its a nice change to the silence of travelling I guess.

WONDERFUL, Carmi....you spread some cheer and good feelings...And got some great pictures, too!

Carmi: I had a very cool Uncle who died young as a result of cigarette smoking. One of the last photos taken by hs wife (now also gone) was in front of a store window you'd expect to fnd along 5th Avenue in New York. Dusk was approaching and his figure was reflected in the mirroe with a lighted cigarette in hand--sort of like a Robert Mutchum. Your great photos and thoughtful reflections brought that back--a pleasant memory!

I worked at a riding stable on a historical farm one summer MANY years ago. As I was walking down to the foal barn a couple was walking up the road to the stable. They stopped to ask me some questions, and it turned out the woman was from Sweden and her husband from Africa (though I can't remember what country). So there we were, three people from three different continents stopping to talk on a summer afternoon. Small world indeed.

The comments that you and Anna have made about a camera opening up conversation with strangers rings true. I have found that when I am riding my motorcycle I am constantly getting into conversations with total strangers. There is just "something" about certain items that opens the doors to these occurances.
Maybe you see someone with a camera and you instinctually know you are looking at someone who observes life and is probably open to conversation. I don't know what it is but it IS interesting.

I love the blue color.

I talk to strangers if my intuition prompts me. I look for opportunities.

Here this time from Michele.
My mom is more outgoing than I am and strikes up conversations with strangers, everywhere. At a restaurant, in a store, in the doctor's waiting room, in any type of line. Often something, some piece of clothing or jewelry she is wearing or someone else is wearing sparks it... big, big QVC fans all over the country, to them there are no strangers.

In my solitary travels of past, throughout Massachusetts (East to west), the other New England states, then my 1600 mile drive down Rt 95 to the Florida Keyes then back to MA (several flights there also), I've had incredible luck making many instant n interesting compadres.

Sometimes, it's easier for folks to be friendly with people they have no history with. Some folks are willing to give you the shirt off their back to help.
It restore's faith that human nature hasn't all crumbled to the Dark-Forces of the Abyss, and that each new face is given a new chance to be a friend, before deemed a foe by deed.

up near the bow (pointy end) the rust reflected in the water looks like blood, is this ship dying? yes I think so.

She might not look like much, but she's one hell of a boat. At only 20 years old, she's still a pup - could use a paint job though.