Little folks, both serious and funny 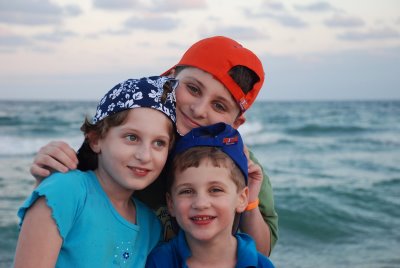 We managed to get them to shmush their faces together for just long enough to capture this fleeting moment of childhood. I don't often pose them because I'd rather quietly capture them as they are. But I like to take periodic our-three-kids pics because, well, that's what parents do. And because their grandparents asked.

Of course, they're my kids. Which, as you know, means they've got a funny streak that extends well beyond the horizon behind them. So mere seconds after I grabbed this picture, they went back to being the insanely funny folks that they usually are. In doing so, they repeated history, as it was my mission when I was a child to make a funny face in every picture my parents took of me. (Note to self, scan and upload Carmi's childhood pictures. Should be worth a laugh or two, ya think?)

Since my parents used film, I can now appreciate why my father's teeth were so often clenched when he took pictures of me. Still, it's the unexpected images of childhood that seem to stick in my mind. And theirs. Hence, the following picture... 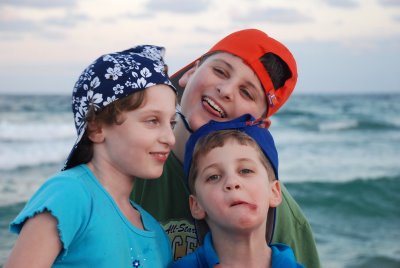 Your turn: Silly pictures. Please discuss your perspective on this time-honored family photo album staple.
Posted by carmilevy at 1/23/2007 12:06:00 AM

Some kids just can't help it. Some kids do it when you least expect it. And some that you never ever think would do something silly in front of a camera will show up in a picture with her friend, both having panties stuck on their heads. Why!? Just because they CAN!

So did your father develop TMJ from all that clenching of teeth while he captured your antics on film?

Those pics are keepers! Your kids are adorable! I love getting a serious and a funny shot because kids are kids...and they tend to be a little more cooperative other times if they know a silly one is in the mix. :)

Ahhhh, you were snowbirds ! Good for you. Kids are wonderful and I totally agree with the posing thing. Besides I can never get them to smile when I want. Thanks for the smile

Wonderful pics, Carmi as usual. Some one surely looks a lot like her daddy.

You have beautiful children. What an amazing gift, fatherhood.

It is in the odd and moments of fun that one is able to capture the essence of humanity, of love.

I have the well rehearsed portrait photos in my collection, but I think the whimsical shots are just as valuable.

Thanks for the beautiful photographs.

I like the idea of capturing things while they are doing it, of course we are like you and do them together as well. I think your pics are great because of the background. Those are btter than some of the ones I come up with. i can't get mine to smile at the same time!

my son is at the age where he absolutely refuses to pose for a photograph.....so candid shots are all i can get. cute kids!

I think silly pictures are some of the best ones. They will always remind us of the happy and fun times we have together, no matter how bad life gets (and, you know, it can get pretty bad).

Isn't digital wonderful!?! Great pictures. It's always fun to do the goofy faces. I try to do some pictures of my self and friends at most outings in a silly way. They are always so funny to look at later when you need a pick-me-up.

Dearest Carmi--Your kids are so incredibly adorable and lively; they look like a very life-affirming, curious bunch!

Like you, I was brought up amidst much laughter. That helped us all get through the 'bad' times--like when Elvis died while we were on vacation down at the Jersey Shore and my father wanted to go home early, etc. :)

It's so terrific to be back here, visiting your blog. You're such a great guy--and it's so obvious that your kids, like you, are going to be just and incredible gift to our society (world society...)

:)
Thank you for always lifting MY spirits.
Love,
Bhakti

Carmi these pics are classic kid stuff! Good looking youngun's you have there. Your daughters' eyes are incredible in that first shot!

You know once they are grown these photos will be invaluable to your kids.

Thank you for the contact email for camera questions. I'm sure I will be firing off a question or two in your direction as I start playing with the new camera.

Our family growing up had the bunny-ear problem... (two fingers over someone's unsuspecting head) It was always performed by my oldest brother...
After he got older, he switched to the finger! Then brother the second began tossing out the pics!

I haven't had kids to pose for awhile... tough job!
Silly is good n beats obscene!

Funny faces or angel faces, these are 3 of the most beautiful children I've seen in all of my (many, many) years.