Frozen lights in the sky 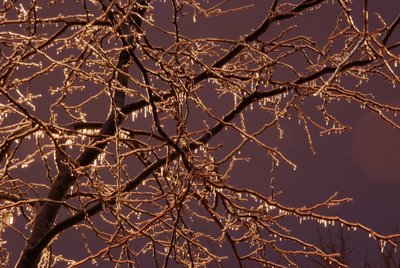 I was up early Monday morning finishing off some writing for work. I often do this when I have early morning deadlines: I wake up early, around 4-ish, boot up the laptop and hammer out as much prose as possible before the kids bring the house to life around 7. 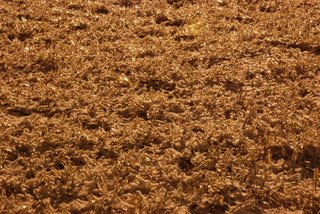 This time, as I tapped out text from the warmth of the living room couch, I could hear the incessant light patter of freezing rain gradually coating the windows of our house. I tried to ignore the growing weather-based threat, but the prospect of leaving the house after breakfast and de-icing our not-so-mini minivan made this Monday seem more morose than most. I cranked up iTunes and focused on my writing.

The clock hit 7. A certain six-year-old bounced out of bed and meandered down the stairs. My writing was done. The day had begun.

We got out of the house early because you never want to be rushing when it's icy outside. As I first stood on our porch and took the scene in, I thought this would make for some nice pictures. But using the camera in the rain didn't seem like such a great idea. Oh yes, I also had no time...had to de-ice the wondervan. Pictures would have to wait.

As you can see, they didn't wait long. Just before dinnertime, I went outside with my tripod-mounted camera and carefully composed a bunch of low-light, long-exposure images. Obliquely lit tree branches almost seem to come alive when they're coated with ice. For the second image in this sequence, I'll leave it to your imagination to concoct what it may or may not be. 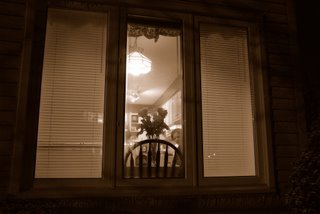 After 37 minutes of wandering around our front lawn taking pictures in the damp cold, I turned to face the house and saw a little girl waiting for me to come back inside. I grabbed a quick image of her lovely little face in the window before I headed in for supper. Warmth just on the other side of the window. Such a world I live in.

Your turn: I believe that cameras can be used to tell stories - even small vignettes of family life. Are you using yours to tell stories in your own life?
Posted by carmilevy at 1/16/2007 01:16:00 AM

I love that last shot. I assume that is one of your kids. If so, please allow me the indulgence...

"My dad must be nuts. He's outside in the freezing cold taking pictures of the inside..."

I like both shots Carmi. I especially like the one looking through the window. Mainly because of the look of anticipation on your daughters face waiting for you to return inside. There is nothing like the moments of sitting around the table together with loved ones.

As for your question, photography is how I document everything!

At first it was scrapbooking and then I turned mainly with photography as my focus. And as we are on quite a journey here, it has actually become therapuetic for me. There has been many circumstances where it has been hard for me to to participate because I feel like an outsider. Slowly I would watch through my lens and then I became an active observer. My Photo of the Day has been a constant pursuit for me to find beauty and creativity in my everyday life and share them with others.

To share snapshots of my life is extremely personal and is like giving a piece of me to someone else.

I love the photo of your daughter... lol but when I looked at it I saw a little girl looking at her Dad thinking "oh no, whats he gotten into now!" lmao Her expression is priceless!

I just got a new camera for the holidays. I LOVE taking photos and morphing them on the computer. I have hundreds stored, but usually only post those relative to my posts... perhaps I will have to just do it!

To a point I have done that in the past, but I don't do it often now and you have made me realize that, Carmi, over the last year or so. I am going to start that soon.

I am one of those wannabe writers indulging mostly in poetic verse; yet-to-be-noticed, unacclaimed, unpublished, hopeful still striving-to-be an imagists poet...

I do capture much of my life through a camera; the most recent being the ice storm that crept across the border and became a part of your day.. I believe your pics are much better than mine...but i do think I captured an amazing sunrise....The sun doesn't shine much here, so I take what I can get!

Is that middle shot of the ice coated grass?

I have a post in the works now about the daughter and her new found interest in cooking.

Sadly, I was cameraless when we were near the icy trees that actually looked icy.

Your shots are wonderful, as always.

And I should use my camera more. Or, you know, at all.

Those pictures are wonderful! Here in VA we get similar ice storms (none this year so far, thank goodness) & I love to take pictures, the best thing about it is in VA we almost always have a sunny day afterwards, Sun sparkling on ice is so pretty!

I wish I had a better camera to take photos to tell a story... Mine's not bad, but it's still a point and shoot digital.

I've got to do that more... Thanks for the reminder!

Your photos are lovely, Carmi!

The iced tree was great....I have no clue what the middle photo could be. And I just loved what you captured with your daughter in the window....the warmth of inside certainly radiated out to the viewer. Great shot.
I try to capture my moments...at least all the important ones.

Wonderful pictures, Carmi, as always....
I love that little face just peeking around the window thingy....Sweet, beyond words....
I think..."Oh My Lord! You out there in this cold damp bitter weather....with a tripod and timing things--You are as obsessed as I am...LOL! And I love that!

Carmi from time to time I take photos to "tell my story". Particularly if my story involves riding my motorcycle somewhere. However I don't have the gift that you and some others I've seen have for getting it in a frame.

I think the second photo....Carmi Sir...is the frozen top of the shrubbery outside your home.

I hope the pictures I take are to tell a story - of a beautiful, lucky life I have been able to have and provide for my family - seriously though - I hate the cold it has been in the mid 20's in the mornings here in las vegas - I do not know how you handle it - brr

mine is used only for that right now...mainly because i have a camera phone..lol. One day when i'm grown i'll get a real camera and maybe include something more artistic

Just coming back to tell you I thought about this lovely post several times today.

the window is an invitation. thank you for letting us into your life.
The "blades of ice is just that, a frozen lawn, or a wooly mammoth close up.