Alone in the big city 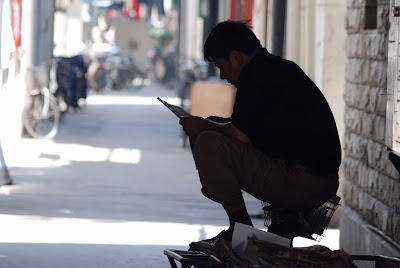 This city seems to have defined the word frenetic. Crowds of people don't ebb and flow as they would in a large American city. They simply flow. There's no such thing as downtime on a Shanghai street in the middle of a business day. It's an energy level I've never seen anywhere else - not even New York's Times Square. It's one of the indelible memories of this place that I carried with me on the plane home.

Yet if the streets themselves are the mighty rivers of commerce and activity, a quick peek to the side reveals a quieter world of hidden alleys and passageways. Hustlers pushing counterfeit merchandise prowl the streets looking for interested customers before leading them through the impossible-to-navigate rabbit warren of old stone and concrete paths. The sun, so bright and constant on the main road, shines only intermittently here, its narrow beams slashing into the dark gray with no apparent pattern or logic. The final destination, deep within clusters of forgettable and forgotten buildings, almost never has so much as a single window.

Yet for all their forbidding dinginess and age, these places offer a sort of refuge from the massive flow of life mere feet away. They are relatively quiet, shady spots in a city that seems to have neither. It is here where my colleague spotted a man reading and tapped me on the shoulder. He thought I'd find the scene poignant. He was absolutely right.

I am enjoying how you are getting so many people in your shots Carmi. It is almost impossible to tell a story through photos of such a wonderful city without including her people. Very nice job here.

He has just received a rejection letter.

This man found out his wife is pregnant and knows he has to pay the hospital fee in full before the hospital will allow his wife to deliver there. He has two jobs already, but a friend gave him a lead to another job to make extra money. He's reading up on the job before talking to someone about it.

Checking out the classifieds for a good, used bicycle.

I just love your photos and descriptions. You write so well. I've been looking (and not commenting!) for a month or two and always find them insightful. Thanks!

"These new public toilets are killing me..."

How fascinating your pictures are Carmi!! You have a very interesting job.

I think he has a menu for an American restaurant and is looking it over before he goes in so he'll have an idea ahead of time as to what to order!

Carmi, I think he is looking at a map; trying to find his way to a new area of the big, bustling city!