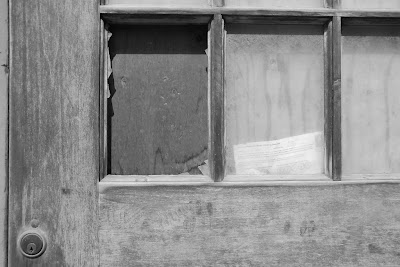 The meter reader was here
London, ON, April 2007 [Click to see the decay up-close]

London's downtown core has been on the ropes for so long that most folks don't remember when it was ever a happy place. I've seen old black and white pictures from its heyday, but it's difficult to believe that this is the same place when you can barely walk down the street without being accosted by someone you wouldn't want to invite over for tea.

The local newspaper, when it isn't busy repurposing generic content from other newspapers in its cost-cutting national chain, runs the occasional cheerleader-like piece talking about how the area is coming back from its malaise.

Then I walk down the main drag, Dundas Street, and see scenes like this. The renaissance depicted on the pages now being chewed to shreds by my dog doesn't seem to exist in the real world. I guess the reporter and I must have been here on different days.

Central London....are you kidding? I love my downtown! :) We go all the time!

the downtown here in Tampa, Fl is pretty decent but by the end of office hours it looks deserted and is known to be unsafe .......I have been there on weekends to check out old buildings and somehow have always felt a tad insecure abt the place...

Technically, what we call "downtown" is really in the middle. . . but the main drag in our town has been on an upward swing for years, with both the negative and positive results.
The positive: A fabulous waterfront for jogging/fishing/strolling/live music/dining, a main drag of interesting shops and a spectacular view of Manhattan.

The negative:
With great progress comes the inevitable higher cost of living. New buildings will threaten the public's access to parts of the waterfront, and chain stores are invading the main strip, hoping to cash in on the city's uniqueness as a shopping location--all the while pushing the actual unique shops out of business. (An antique store becomes a Foot Locker; a local ice cream shop closes in exchange for a Cold Stone Creamery, etc.)

We just moved from a place in CA that had a wonderful downtown. Great little shops, places to eat, parks and the best farmer's market was there every Saturday. I really miss that because we don't have that here.

It did give me an insight into what kind of town we want to live in when hubby retires in a few years.

Our downtown is quite a thriving place. Of course being in the UK we call it the City Centre. I don't go there much as I live quite a ways out in the suburbs and the traffic and parking can be dreadful.

I think the scene you depict is fairly common in most cities, Carmi. Our downtown is in the midst of renaissance; there are 3-4 cranes in evidence every day, and old places like that one are being replaced with new condos and apartments. But give it 20-30 years, and they will look like that pic of yours - and so the cycle goes.

I see "downtown" as a tense split between the classes. Oddly enough, it is what a city is. Where else but downtown will you see those who are forgotten/those that people would rather forget (homeless), the working stiff (those who toil in the remaining storefronts and the office workers), scads of students during the day thanks to three highschools within walking distance, and finally the have-a-lots. =-) The ones who hole themselves up in the downtown hotels (ie: the glass one) that accidently step outside due to unfamiliarity with the area and retreat back to the hotel when reality sets in to retrieve their vehicle to be with their bretheren in some other area of the city.

I rewrote this a couple times, but in contemplating it, downtown in its own strange way is feeding the delusion simply from the wide range of people coming and going. It escapes pigion holing. And yes, I am talking about downtown London.

Do I go downtown? Not often anymore (aside from driving through it almost daily). I got dragged down as a kid to the big department stores, I went to one of those three highschools, I spent lots of time cruising the main drags after getting my liscense. But afterthat, well, buisness is what takes me downtown when I stop there...

It's a cycle. If it were awesome, those living there couldn't afford to anymore...

we live in "tourist-ville, so the "downtown" is all fakery and shopping.
I avoid it - prefering the woods - or houses at the edge of development.