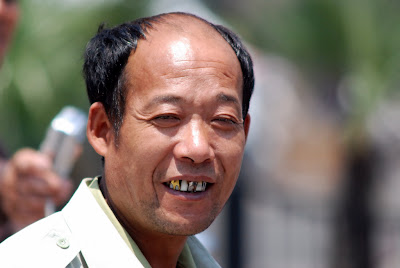 I've written previously about my thoughts on privacy and photography (please see here and here.) With relatively few exceptions, I've avoided shooting people's faces as a means of bypassing privacy issues. I suppose I could carry pre-printed release forms in my camera bag, but I've long thought that simply not going there was the optimal strategy.

As you can tell from some of my already-published Shanghai pictures, I seem to have set this personal policy aside for a bit and shot images of identifiable people - strangers - in the street. With the long lens, they were, in most cases, completely unaware of my presence. I could optically reach across the street and pick off pretty much anyone I wished.

It's something I still wouldn't do closer to home. But there was something about being in this place so far from home that I guess emboldened me a bit when I got the camera in my hand. It felt like an appropriate storytelling tool, that if I didn't capture at least a few photos of the people here, my story would be incomplete.

With that in mind, this man's face captures so much of my feelings about this place. The wrinkles on his face and the bags under his eyes mirror the brutal pace of life in this place. His face tells his story, even though I wouldn't understand his spoken language.

Almost as soon as I've taken the shot, I'm tucking the camera back under my arm, feeling slightly guilty for pushing the bounds, but still happy that I captured a thoughtful moment in this stranger's life.

At the very basic level, if your out in public, your fair game for the camera lens. However, being discreet about taking photos and avoiding potential confrontation with those who may take issue with photos is always prudent.
As for your images, I would not say you pushed it. How else can you capture the essence of a foreign land? Especially when the people are what where as much, or more of an impression than the landscape.

I posted a couple of favorite faces on my site for you. :) I couldn't wait to see ShangHai through your lens. You haven't disappointed yet!

Carmi I'm just not sure on the privacy issue.

In this shot it seems to me that not only does this fellow know he's getting a picture taken, but he's smiling for you. I certainly don't see a problem with that.

In a strange bend of thought, the pics that you take of people that aren't actually looking at you somehow come across as being "ok" with me. Perhaps it is because I see those people as part of a generalized group....human kind as a whole.

When I read that it sounds like a convoluted way of thinking. I guess what I'm trying to say is the style of photo you are taking differs from the style that you would get from lets say a member of the Paparazzi. They come across as invasive and vulgar. Your photos come across with an almost National Geographic feel.

He doesn't appear to be perturbed by your photo-taking, carmi. I don't see why there would be a problem if you are not deliberately putting someone in a bad light.

I agree with all here....Sarch mentions that this man is part of a generalized group.....I like that. When I look at a photo like this, I see a man who is a part of our global village....

it gives all of us a wider lens on humanity.

Once a few years ago I was somewhere where I oughtn't have been. During the evening news that night the camera panned to the street scene from earlier in the day at the same time I was there! My heart clutched. Since then I have been very aware that no matter where I go I am pretty much 'on camera' and conduct my life accordingly.
As for privacy issues....I dunno. Really, if your motives are pure where is the harm?

I love your work tho.

It IS a delicate issue. Legally you have a right to take photos in public in the U.S. China is more conservative. I think for personal use, photos in public of anyone are fair game for your personal use...the real issue comes with posting it on the Internet for potentially everyone to see. But then, journalists do this all the time.

Fascinating question today, but I see absolutely nothing wrong with taking the kind of photo you are showing us today so long as the photo is not used for commercial game (and I don't think posting it on your blog qualifies unless your blog is heavily sponsored by advertising and is specifically photography oriented).

I do think using discretion is a nice thing though. I'd be annoyed with someone coming right in front of me and snapping pics . . .but from far away, with a long lens, no problem

I am also going to mention that I feel like if you are taking the photos pure in your intent... in a National Geographic sort of way... what's the harm?

With practically everyone with a camera on their phone, we all could have pictures taken of us anytime. New phase in society... when out in public there is no privacy. Nothing new, really... it's just now we have more pictures to prove it, I suppose.

Well I'm not sure about Shanghai or anywhere else, but here in the good ole US of A, as long as your subject is in a public place, there is nothing illegal about it. As far as the "ickiness" factor is concerned, well... that is a personal issue.

I can identify with your dilema & certainly see why you would feel more free to 'shoot at will' so to speak in annother country far removed from everyone you know personally.
As for wether it's 'wrong' I don't think so- but then I always study closely the 'stock footage' on the news when they're talking about overweight people & weight loss because I'm terrified I'm going to see myself one day on tv! I think it has a lot to do with context & I don't think you're showing anyone in a negative one.

it seems that he is smiling. even though the years of toiling show in his face, he still seems to be a contented man.

I'm with everyone one else on this issue, Carmi. I think it all boils down to intent. If you're in public, then you're fair game. But, if someone is in your face and posts a photo of you with the intention to defame you, or with the sole intention of making money, then I think there would definitely be an "issue."

However, with that said, I think I'd be a little nervous if I caught someone taking a picture of me - and not because of any privacy issue, per se, but simply because I wouldn't know their intention behind doing so.