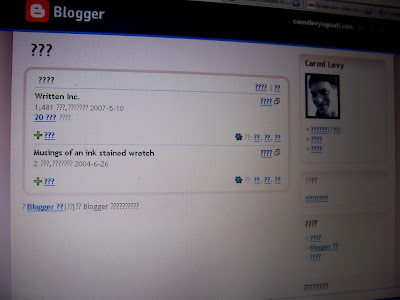 Blogging with difficulty from China
Shanghai, China, May 2007 [Click to enlarge]

We take many things for granted in this free society of ours. Freedom to communicate is one of them. We assume that the channels we use to fling messages back and forth will always be open, unencumbered by any kind of authoritarian, autocratic rule that would impede our ability to express ourselves as we wish.

Until every country on the planet is a democracy, that assumption would be a false one. I learned fairly quickly when I first logged in that some services are deliberately compromised by the government.

I've often been quoted about search engine firms like Google and their efforts to crack the Chinese market. I've spoken about how these firms have agreed to compromise some of their innate secrecy by limiting some services and sharing other data with the government. My contention has been that these compromises may seem abhorrent to freedom-loving observers, but they are the cost of doing business here. If you don't bow to the government's will, you don't work here at all.

So it was with little surprise that, when I first logged into my blog admin interface, I was presented with unintelligible question marks where all the links should have been. Some worked, some did not...the Great Firewall of China was apparently doing its thing to limit people's - and my - ability to blog from here.

With difficulty, I managed to publish the entries that I had prewritten and saved as drafts. But I felt like a prizefighter with one hand tied behind his back. I knew I'd have all my accesses back as soon as I returned home, so it didn't concern me all that much. But then I thought about folks who live here, who must deal with these limitations constantly.

Your turn: What about them? What must it be like to have one's voice suppressed?

So, if you managed to break through the Great (fire)Wall of China, does this make you a hacker now??
I like your images and the idea of naming the caption for them...
Michele sent me today...

In one of my classes, it was pointed out that if one Googles "Tiananmen Square" on Google/China, the massacre won't come up, or something like that. I remember doing it in class and it was true, the "free-world" Goolgles brought up the uprising instantly whereas the Chinese version only produced idyllic images of the famous square.

Unfortunately, I can't remember enough to reproduce the experiment - it might be in my notes though.

As frustrating as it would be, I would most likely find other ways to express myself and/or voice my feelings.

I once had an art project where I was limited to certain media, but had a great idea using a different media. My instructor refused to allow me an exception. As annoying as it was in the beginning, it caused me to rethink my idea and come up with something even better. I've never forgotten that.

Yes, we take our freedoms for granted. This is Memorial Day weekend in the States. I have heard so many new reports about the unofficial start of summer and high gas prices, but not much about the meaning of the day, Memorial day is Monday, so hopefully the focus will be redirected by then.

Wow, that is sobering. I can't imagine trying to live an entire life in that type of environment. Very sad.

Although there are some bloggers from China that I know...I wonder if they have problems like that?

After living in China for awhile, I can say it felt very much like living in an informational hole. That's the only way I can describe it. I would get pieces and parts of information, but not as thorough as in the west. CNN is presented differently in this part of the world as well. Also, bigger, more industrialized parts of China are privy to much more information than more rural sections. Culturally, it's a wonderful place to live and explore. But these types of freedoms are so basic to us, and it sure is hard to live without them.

There are many here in freedom land who could use question marks replacing most of what they express...

The freedom to be irrational seems to go hand in hand with our other freedoms...

Good Morning, Carmi: Here via Michele, but glad that I stopped by. I'm totally with you about the Hope that more democracies sprout up! I have Vietnamese friends here who are so admirable in their stories of escaping to freedom. Have a great weekend!

Yeah, I heard about this hi-tech social divide......

But then, I have got pretty much the same blogger screen here in the UK when blogger has been poorly!

Hi Carmi my friend - on the other side of the world - I am back from my medieval jaunt to Italy and Michele sent me to say 'hi' :-)

I found out today I have been nominated as a Legend at Zeus' Legends Ball 2007. How cool is that?

To be brutally honest, all governments supress freedom of communication in some ways.

We in the west have very schizophrenic views of this... it is "bad" to restrict freedom of speach, but "good" to stop people plotting terrorist acts, or inciting racism, or proposing revolution:-) At least in China they are open about their censorship, and there are various unofficial but formalised ways to still speak your mind. Obviously, if you speak it to the wrong person it could be bad......

I think the communication revolution has been the biggest cultural change since the printing press, and will gradually creap through into even the toughest countries. But we are nowhere near that yet! Half the rich world are barely literate in this new technology, let alone the poor one. Considering we've had the printing press for 400 years or so, and there are still people in the world who can not read, I feel it may take a while for the internet to create a true sea change:-)

As to your question, there are Canadian re-enactment groups. I don't know which ones are good, but they cover periods at least from Viking to WW2. Avoid any group that allows elves to join!

I think my head would explode if I lived in a place where my ability to blather on endlessly was capped. I think it would feel much like it did when we were 5 years old and all the grownups kept hushing us--but it never ends.

Here via Michele's this time!

Unfortunately, there are those in this country who would like us to be similarly shackled. Cheney is speaking at West Point this weekend. No protesters allowed.

Land of the free...sort of.

Hi Carmi
Wow...this is a real eye-opener. I can't imagine not being able to say what I feel and think...it shows how much I take it for granted.
How long are you In China for?
Michele sent me too, although of course you were top of my 'must visit' list anyway!!!

Hey Carmi! Long time no visit! It's been a while. Hope you and your family are well and ready for the summer.

I can't imagine what it must be like to have your voice surpressed. We take it for granted don't we?

Hey Carmi. I haven't visited in a while.
I understand about the Asia thing. My company owns a company in China and it's a PITA to work with them sometimes.
Visiting via our friend Michele

An interesting post which has generated thought provoking responses!

Hey, love. This really fits in with my post from last night about strong women, huh? It all is part and parcel, I swear it.

I'm thinking of declaring June Strong Woman month, or Quest for Freedom Month or something like that. What do you think?

well, we as a society in North America are well used to the freedoms we have (and often take for granted). But a gentle reminder that Big Brother works here in the "freedom center" of the world....my husband, in the military, went to work yesterday, only to discover that the DOIM (Department of Information Managment) for our post had downloaded yet another security upgrade...which has now limited his access to pretty much anything. Even many military sites he needs access to are blocked. Yahoo, MSN and the like are no longer accessible. He can't access his online school site. He can't research any music (he IS a band master/conductor) in order to provide program notes for concerts. EVENTUALLY, he will get his accesses back, but it is an uphill battle with the DOIM every time they upgrade security. DOIM could just avoid it all by not upgrading my husband's computer, but they do it all, then have to backtrack to the various entities who need access (you can not tell me that the commanding General of the post is completely blocked...for crying out loud, the man showed everyone the "Army Strong" commercial on YOUTUBE which is now a blocked site!!!)

It is too horrible to contemplate, Carmi. It is abhorent and frankly I don't know how anyone lives that way....We are so used to these kinds of frredom's...we take all this for granted! To be confronted as you were with this page of questions mkarks....UGH! Well, you are a Computer Wizard so somehow you found a way around the "Great FireWall Of China"..(love that name...), but I wouldn't have a clue as to what to do. Multiply that by 20 fold, at least, and it would stop everything dead in every way...The depression from that would probably make me get on the first plane out of there....!

As usual...I forgot to say Michele sent me today...I think I got traumatized by those Question Marks....!

You can use www.proxytor.net to access blocked web sites.