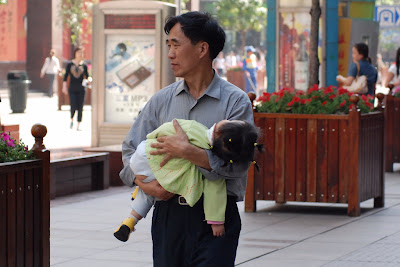 When I originally confirmed my plans to travel to China, I expressed concern about the wisdom of bringing a large-ish digital SLR camera along. I decided to tote our little point-and-shoot instead, reasoning that it would be less conspicuous a tool in a place where personal freedoms weren't guaranteed as they are here.

As I got closer to departure, I had a change of heart. I had visions of coming across photo ops that would pass me by because the little camera was just too limited with its wide-angle lens and slow response time. In the end, I brought the Nikon with the so-called big lens (75 to 300mm), as well as the pocket camera. I'm glad I did, because otherwise I would have missed a moment like this, when a pensive father walked along the Nanjing Road pedestrian mall with his sleeping infant daughter in his protective arms. With anything smaller than a long lens to pull the moment in and make it real, the shot simply would not have happened.

hold me while I sleep until I can get to my stroller/crib.....sleep little baby girl...sleep

I love to see babies and children sleeping in their father's arms. It speaks of protection and most of all, love.

makes me want to stop him & tell him to enjoy the moment because soon she will be too big to be carried so easily or she will want to walk on her own . . . children grow up way too fast!

It's saying..Daddy take me home...I want to sleep in a bed!

a lovely photo - so comfortable in his arms, he's comfortable with it, three words... safe, secure and sleepy..

I LOVE to see pictures like these. It really captures the heart of chinese families. Fathers carrying around sleeping babies, even grandmothers and grandfathers carrying them around, too. There is so much more to their families than just mother and father on a daily basis.

One of my favorite pictures (I know it's in the states somewhere) is of a grandmother of a friend of ours carrying my son on her back. He was inside a big basket and had his arms around her neck. She would take him with her to market, and he would always come back with handfuls of candy that shopkeepers had given him. Those are great memories.

its a beautiful pic......the li'l girl looks like a doll....adorable....reminded me of my papa instantly...

"no matter how fast paced this world ends up getting or no matter where we are, I will always protect and love you"
beautiful pic Carmi, thanks for your kind words. Glad you made it home safe and sound.

Wow - the emotions caught in this are incredible! I love the concept of a busy and hurried world going on all around him and yet time has stood still with his infant in his arms.

My first thought - I wonder what YOU were thinking when you saw this scene?

Lovely shot as always and evokes so much emotion!

It has such a lovely feeling Carmi...BEAUTIFUL Photograph...! It has a sweetness to it that says in some ways people are the same all over the world when it comes to children and parents...!

The subject matter is wonderful, and universal too, we can all understand this, but I was surprised at how modern, clean, and pretty the location is. It looks like an upscale pedestian area in any other country. I just didn't expect that in China.

There is something in his face - the concern, love and cherish that he has for that sleeping child. What a great shot!

A fathers love is universal...what an intimate shot Carmi...I am glad that you got it.

I think the guy is thinking, "Oh please, don't whittle on me..."

The beautifying campaign of Nanjing Lu (Nanking Road)--a major pedestrian promenade and shopping district in Shanghai--seems to be paying off. The shrubs, the flowers, and the planters are new, stippling the barren street with a sense of invigoration.

Carmi I find myself wanting to sit down and talk to this man...what is on his mind? What is going on in his world?

The complete trust of the child in her father... so complete that she can sleep totally relaxed and limp, knowing he will never drop her.