Pearls in the sky 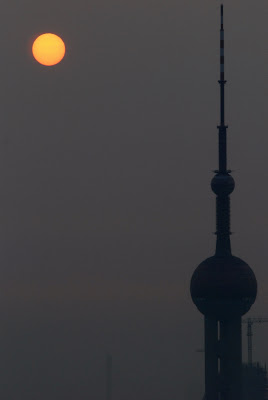 The sun rises over Shanghai
Shanghai, China, May 2007 [Click to enlarge]

I shot this early morning perspective from the 66th floor of my hotel, Le Royal Meridien Shanghai. I wanted to catch the sunrise against the Shanghai skyline, but was stymied by the thick smog that turned the vista to mud and blocked the sun as it rose above the horizon.
This is the famous Oriental Pearl Tower (travel guide, wiki entry) that serves as an iconic gateway to Shanghai's seemingly never-ending skyline. It seemed everywhere we went, there it was. So when I realized it was easily visible from the hotel's top floor, some high-up lens time became inevitable.
I wrote about this shoot here, and am happy to finally able to share it here. In the end, I'm glad I took my Nikon along, because it allowed me to bring home not just images like this, but the moments that preceded their capture. After all, photography to me isn't just about the picture. It's about what I was thinking and feeling before I took it. The story takes on a third dimension beyond the initial two of the basic image.

Yeah, I'm getting metaphysical on you. But it's 4:20 a.m. as I first compose this, and I'm so massively jet lagged that I can't fall asleep. So I'm writing.

Your turn: The first three words that come to mind as you see this are...?
One more thing: As I composed this image, I noticed something I'd never seen before. Namely, I could actually see the edges of the sun shimmer in the roiled atmosphere. It was like I was watching a special effect in some movie, except it was very real and very dramatic. Alas, a still camera can't capture the effect, but it'll stick permanently in my mind nonetheless. Has this ever happened to you, too?
Posted by carmilevy at 5/14/2007 07:58:00 AM

Carmi, I love the way the shape of the sun mimics the circular shape on the tower. This is an excellent photo!

Interesting. It looks like the sun did in our western sky the other evening through the smoke of the Florida fires.

Kenju had the same thought as me, the combo of the spheres of the tower and sun, just work...I love it.
The effect of the sun in the smog is very odd to see also. Makes one wonder how ppl's lungs are there ACK.. the photo is beautiful nonetheless.

Stuff like that happens to me, usually at the beach. The camera just can't seem to capture all the color, the light, the shine off the water -- not the way I see it anyway. But sometimes, the camera captures more than I see and I'm like, damn! I took THAT! That's why photography is so cool. :-)

The best part is just the way you view the world. Not everybody takes the time to appreciate it. But you do.

Smog and all, it's still a wonderful photograph.

Did you notice any Chinese taking photographs like we do in our own countries? Do the Chinese use cameras made in China, or do they buy Nikons and Canons like much of the rest of the world?

This is so cool. I thought it was the moon at first.

Can't wait to see some more of your photos.

I am sure that you are thrilled with this shot. Very nice Carmi! :)

for some reason my first thought was blind onion, blind from the smog yet the round onion still comes through

moving water is another example of something beautiful to shoot, but impossible to capture.
you did well, my friend1

I love this photo...it is so evocative and otherworldly

btw.....i'm often awake during those deep dark night hours.....it's when the writing bug really bites for some reason. :)

I love this photo Carmi! It is amazing!

The smog heightens the ambience. Thanks, a truly beautiful photo.