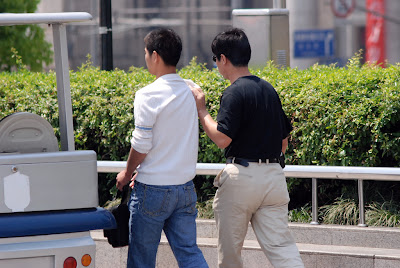 It's a hot and humid afternoon on Shanghai's broad riverfront promenade. Kajillions of people from all walks of life are enjoying the day. It's just as crowded here as it is a few blocks inland, but the breeze that blows in across the water makes things a little more comfortable for all who visit.

Our little group meanders around the waterside railing, taking pictures and discussing where we'd like to go next. Suddenly, a commotion erupts nearby. People running in different directions. Lots of yelling. Eyes and necks strain as everyone tries to figure out what's going on.

Pretty soon, it becomes apparent that it was an attempted purse snatching, and the alleged perpetrator has been caught. I swing my lens toward the officer leading this man away, the object of his alleged crime still clutched in his hands.

Normally, I'd feel a sense of smugness that the criminal (OK, alleged criminal) had been caught. But this isn't home. Due diligence and a transparent judicial system aren't part of the landscape here. I feel a chill down to the base of my spine as I wonder about the future that now awaits this individual.

I'd say his future has just closed-in a little, at least I'd hope it has. One never knows how justice is meted out in a foreign country.

Hard to know how people are treated in other country's when caught in an "alleged: crime. I must say, it certainly appears as if he took someone's piurse...BUT, maybe it is his own!

Michele sent me back...But my first comment isn't posted..Hmmmm.
Well, I'm not sure what that means, Carmi....

Anyway....I don't want to repeat myself...(LOL)....So, I'll just say I would not want to be arrested ever, but certainly not in another country where the laws could be You Are Guilty, Till Proven Innocent. OY!

I still envy your trip there. Have enjoyed your pictures.

Well, in the rural areas in the mainland (from my limited experience), it has meant a good beating (whether man or woman), usually by the person who was stolen from. Then, possibly some jail time or a fine. I'm not sure what the laws in ShangHai are. Much of the time it depends on whether or not there is a crackdown on crime. If there is a crackdown, then who knows what will happen. But any other time just enough is done to appease the victim. Saving face is very important. In Taiwan, there is a court system that's pretty fair.

Probably released through lack of evidence if lawyers are as they usually are.

Shows it's important to always have a camera.

I was intrigued by your question and some of the comments - so I looked up Chinese Law.

It seems that now, after radical reformations in the last century or so, it is now more in line with the West - and has left the 'Five Penalties' long behind.

You could say China used to have brutal penalties - but then we weren't so hot either.....

At the risk of sounding boring, I am thinking this boy will possibly get a punishment along the lines of our penalty system.

Am I the only person surprised that the victim didn't get her purse back???

It brings to mind the arrests of people protesting injustice in Tiennamen Square, which was not in Shanghai, but set my mind on a path of punishing bad deeds as well as free speech. Michele says hi!

Hmmm, I'd say probably a pretty bleak one.
You sure were on the ball getting that shot!

I certainly would not want to be going to jail in China....YIKES!

Good to have new experiences. Good story with the shot.