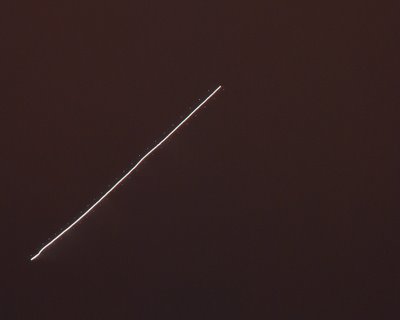 Notes from the road: I'm sitting here, safe and sound in my hotel room on the 33rd floor, looking over Shanghai as it awakens for another day of frenetic activity. The pace here reminds me of a supercharged New York City: Never mind that it never stops. Rather, it never seems to slow down. It makes for an interesting visitor's perspective, but I doubt I'd have the capacity to live here. Beyond the language thing and the distance-from-all-that-matters-to-me thing, I need occasional bouts of quiet and reflection. I love being surrounded by friends and family, but every day should have at least a few minutes of simple alone-ness. I doubt that's possible in a city of this density.

I've had some, um, interesting experiences walking around the streets here. While walking beside the river, I suddenly saw the Good Year Blimp flying incredibly low. I startled my colleagues when I freaked out and scampered up the footbridge steps to get a better view. I had visions of witnessing a blimp crash and then sprinting back to the hotel to file my pictures with some famous wire service. In the end, it was a hot dog pilot doing things that would get him (had to be a him) grounded in the U.S. Blimp Top Gun, anyone?

Earlier, I had been asked to pose for pictures with a pretty young woman in a red dress. Her male companion (older...kinda creepy) was incredibly insistent. He didn't speak a word of English, but his body language was pretty clear: may I take your picture with her? Sure, I thought. When in Shanghai... But he didn't just want a picture. He wanted lots of pictures. Different poses and perspectives - all in front of the Chairman Mao statue. Lovely. I'm sure those shots will end up on some Communist Party propaganda poster someday.

I have had more photographic magic moments here than anyone deserves to have. Here's an example: The sun rises really early here, like around 4:45, but it's hard to tell precisely when because of the intense smog. So I went up to the restaurant on the 66th floor of the hotel with my Nikon in hand to capture it in some way. The vista was stunning, and I stayed there for a bit, capturing whatever tickled my fancy. I felt like a sniper - long lens, high perspective, picking off targets. It was surreal. The place was desserted, so I hung around for a bit.

When I finished, I crossed to the other side of the building to see if the views were any better. They weren't - the light was flat toward the east - so I settled on the shelf of wine glasses beside the picture window overlooking the city. So here I am in my shorts and t-shirt (I dressed for the occasion, can't ya tell?) shooting long exposure images from the bar. I'm playing with my camera's remote control when a restaurant worker reports for duty and sees me. He does not speak English, but he looks annoyed. He manages to ask me for my room number. I get just a little nervous, and say "pictures" in animated tones as I point to my camera and smile. Then, when he goes to get help, I duck out for the elevators and scoot back to my room. No knocks on the door yet, so I think I'm safe. Maybe next time I'll ask permission first. Or not...

The crazy thing is, I've got enough stories in my notebook to keep writing for months. It's incredible how intense this experience has been. Lucky doesn't even begin to describe how I feel.

Your turn: Yes, the picture: I'm hoping you can guess what this is. Leave your best guess in a comment, and I'll post a response here in 7 days. I'll give you one small hint: there is some relevance to my adventure this week.
Posted by carmilevy at 5/10/2007 06:53:00 AM

Email ThisBlogThis!Share to TwitterShare to FacebookShare to Pinterest
Labels: Monochrome, My travels

It looks like something from my biology class...
I have no idea. I will be back fro another guess!

Which side of the river are you in the city?

I stayed at Peace Hotel when I was there...right at the Bund, the river bank. It was winter--so snow flakes hovered over my head and invaded every single crease of my coat before I could take some good pictures.

I agree with you about the fast pace and the distance-from-all-that-matters-to-me thing, I felt that way when I was in Indonesia.

Is it a plane in the night sky? I'm guessing because you talked about long exposures.

Don't you love the posing thing? UGH! My kids have blonde hair, so they would get hit up a lot to have their picture taken. Still do. They've learned to hold out their hand and say "Shi kuai." (10 rmb) It always gets a laugh.

I don't know why, but I keep thinking it is a view of the bottom of a door with light creeping in from underneath....or, a window where something is blocking out most of the light and that is the small portion of light that still gets through.

Carmi, I think it is a string of lights on an airplane runway at night (of course).

I can't wait to see what you'll post about your trip!

lights on the railing/support structures of a bridge? or something from your long exposure photography. Either way it looks like an electric creature from the deep sea!

another guess: is it the inside of a dark hotel room with the outside light shining through the closed drapes because you have your days and nights mixed up? :) That's my final shot.

Enjoying notes about your trip!

(I think Stacy has the right guess about the photo.)

am loving hearing snippets from your trip, am pleased it's so full - will stop by later and think on your picture...

What a wonderful write up! Sounds like you are having an amazing trip and I am enjoying reading about daily life through your eyes!

Intriguing!!You are really relishing this trip, I can tell!!

long exposure of a plane in a night sky - or the/a blimp... one or the other :D
how did I go? Semi correct?

its fun to hear of your adventures. I can see you in your short shorts and tshirt now bolting around to get the best picture (or to steal it haha)

And hey, your practically in Australia - amazing how things are so far and yet so close!

The trip does sound wonderful.

Yep, pretty sure it's a long exposure of an aircraft flying overhead... you can see the pairs of dots beside the long line that's caused by the wingtip navigation lights... :)

Apologies for the delay in getting this posted. The flurry of the pastfew days has distratced me just a little bit. I guess resigning from my job will have that effect :)

Stacy was the first to post the correct response. This is a 30-second exposure of an aircraft on approach to Montreal's Pierre Elliott Trudeau International Airport (formerly known simply as "Dorval"). Planes on approach fly a large pattern that, depending on wind conditions, takes them over western Laval, which lies to the north of the airport. My parents' condo building lies under the approach path.

Kudos to Ravvyand Phill for also guessing correctly. What I love about this image is the imperfection: the line varies slightly, reflecting the small changes the pilot would be making to keep the plane where it needs to be. The anticollision lights paint a perfectly sequenced border on either side of the line.

I especially loved everyone's guesses. It goes to show you that photography doesn't always need to be literal representations of reality. I had fun with this, and I hope you did, too. I'll post similar mysteries as they crop up in my viewfinder.

Thank you all for participating!