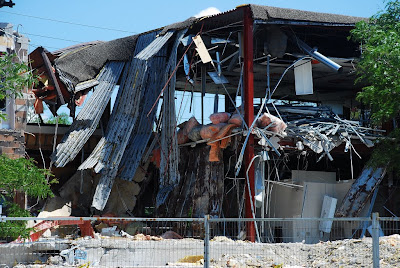 As much as we'd like to think that buildings last forever, they don't. This particular example wasn't all that old. It was an otherwise forgettable two-storey office/strip mall kinda thing on the edge of a major - and failing - shopping mall's parking lot (Westmount Mall, for all you Londoners.) And for whatever reason, the powers-that-be decided to junk it and build something new and fresh.

We're still waiting to see what that new and fresh vision is. But I'm willing to bet it'll look pretty much like similar buildings in Stratford. And Toronto. And Montreal. And...

Eventually, the only way to tell you're in London will be by the GPS coordinates attached to the photo. Yippee.

Retail spaces have become as dispensable as the products they sell. It is cheaper to tear down and rebuild than to renovate.
The old buildings ( in London look at the Dominion postal building at Queens and Richmond) were made to last and give the impression of power and stability.
Look at government edifices, from Roman coliseums, to American and Canadian State and Parliament buildings.
Want Big-Ass Looky-Loo power structures? Hows about Churches?
You don't get much more "Oooh, I'm all high and mighty and you're so insignificant" than that.
Things used to be built to last. Now they are just made to be a temporary profit centre.
If you had not have identified the structure, I woulda guessed trailer park.

it's sadening and hard to believe that something can become so neglected as that photo...forgotten, in plain sight...

Sometimes I think the decision is made by those passionate enough to strap themselves to the building and brave the bulldozers... but not too often.

"Junk it" is certainly the right phrase. How sad looking.

If only we could bring ourselves to build something worth keeping to begin with.

I think Bobbie makes the point perfectly. Build something worth keeping to start with and someone will want it. And Klaatu -- as usual -- underscores the point as only he can. And I'll illustrate his point(s) with ... illustrations.

And okay, this isn't a Parliament building, but it is owned by the state.
Thematic Photographic 77: "Buildings" v.6.0 - Department of Defenestrated

Hello Carmi!
This will probably be replaced with a Tim Horton's (there isn't one on that corner yet).
Terri

Hello Carmi!
I apologize for using your Blog as a venue to communicate and compliment another Blogger's posts, but I am not of the Blog world and I cannot figure out how to post a comment on Mojo's Blog (the way he has the comment moderation set up seems as though I cannot post anonymously) that and I could not resist.
Mojo:
The photo of the the church built in 1932 is just gorgeous! Your title choice for it "Imperious and Imposing" is apropos. I love it!
Terri

P.S. Thanks Carmi, again I am sorry for using your Blog to communicate with Mojo on his post.

Surprisingly there is no Tim Hortons going up... Last time I drove by the corner it was being turned into a pathway/pseudo grassy knoll to funnel pedestrians from the corner into... the barren parking lot!

Speaking of building buildings worth keeping... Whats with all the stucco ugliness that is invading the city?