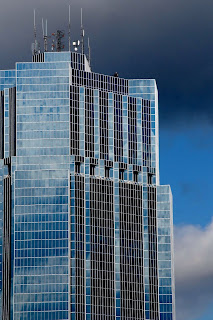 On a quiet downtown London street a year ago September, a few parents waited for a birthday party to finish at the adjacent laser tag facility. Not everyone knew each other, so the familiar ones gravitated into separate groups of two or three and chatted idly in the late summer sun.

I pulled out my camera and trained it on the biggest thing I could see. Our friend wandered over and asked what I was up to. He wanted to know what I was looking for and what I did with it once I found it. I showed him the results on the camera's screen and he told me to keep shooting the ordinary from a not-so-ordinary perspective. It wasn't anything more than a friendly conversation between friends, something he and I had done so often as we crossed paths in our typical suburban existence. And as I fetched my daughter and loaded her into the van, I didn't give it much more thought.

Fast forward a few months and our lives changed forever with news that our friend had suddenly passed away. I thought immediately of that moment on the downtown sidewalk, of how what had once seemed ordinary would forevermore be anything but. This building, the very epicentre of our town, is now a beacon for that fleeting shared moment. Every picture I take of it instantly reminds me of him, and why I need to fight just a little harder to hold on to the ordinary, the mundane, the routine, the forgettable.

Because on reflection, nothing is ordinary, mundane, routine or forgettable. Life, which can - and does - end in a blink, compels us to treat such moments with more respect and awe than we already do. You can't thank those who have passed away for the lessons they've taught you. All you can do is apply those lessons forward. And so I am...

We often don't realise the importance of a fleeing event until long after. I remember seeing my mother-in-law bending over my toddler daughter , looking at a bug in the grass, many years ago. The memory, which was unimportant at the time, seems very meaningful now.

Beautiful reflections and a very important lesson to remember. Thank you for sharing it today.

I've joined in this week as well. Here's mine.

This is it! The key to living fully and with passion. To see all we have. Right in front of us. Everyday. I can't believe how concisely you've nailed it. Beautiful.

It was not quite a year ago I learned this same lesson from a blogger I barely knew -- didn't know at all in the three-dimensional world. But her words and art resonated with me, so the usual casual friendship materialized between us. I'd get an email here or there, send one here or there, no deep "connection" that I could see.

It wasn't until I got the news that she'd died that I realized how much she'd touched my life in spite of it all. And ever since I've been thinking of that last email she'd sent me that I'd kept putting off responding to. Not because it was difficult to answer, just because I hadn't taken the time to do it. It was always "I'll get to it". And then suddenly it didn't matter anymore because she's moved on to a new domain -- GreatBeyond.net.

Even in her death she taught me something. Never put off telling those you care about that you care about them. Because you might find yourself holding that message in your hand forever if you don't go ahead and send it.

None of this has anything to do with my Thematic offering for today however. Unless you want to try to draw a parallel between renovation and renewal. That might work. Thematic Photographic 77: "Buildings" v.2.0 - Facade Lift