Playing in another world 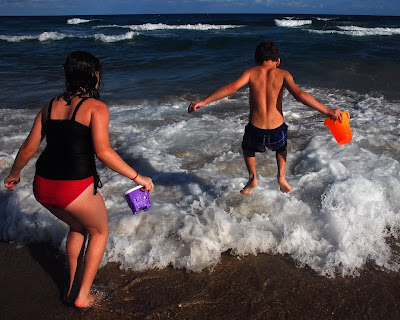 We seem to have made it a family habit to go to the beach on the last day of the year. It didn't evolve deliberately. Rather, it's one of those little life events that seem to play out according to an unseen script. We turn around on December 31st and, somehow, we're watching our kids frolic in the surf.

However they got here on this day, it was clear to anyone who saw them that they came from somewhere that may as well be on another planet. While most everyone else hung back from the water because it wasn't quite warm enough, our intrepid kids dove right in and stayed in, afraid to miss so much as an extra minute of playtime in the surf.

Two weeks before I tripped the shutter on this moment, they had been battling snowdrifts that cast shadows above their heads. Playing outside meant pulling on multiple layers of winter clothes, then sitting around the kitchen table when they were done as my wife made them hot chocolate. For the record, there was no hot chocolate in the cooler on this day.

I stood further up the beach watching them play for what seemed like an age. I waited for them to get tired, to slow down, to want to come back to our seats and take a break. Hours later, I was still waiting. I guess all that living in a snowbound land made it that much more urgent for them to cram in as much beach time as they could. Because in just a few hours the year would be over. And not long after that they'd have to head back home.

The hot chocolate, as always, would be waiting for them. Wherever they ever call home, they know mom will never let them down.

Ah, yes. I remember the Canadian who lived across the street from us in Maryland. In winter when the temp got above 40 F he would be out washing his car in his shorts!

It's awesome that your kids could brave the cooler temperatures of the beach in December, and without wet suits to help keep them warm. That takes a special kind of tough from the perspective of a Floridian.

I lived in Florida until I was ten, and every summer our parents would pack the four of us up and we would drive from sunny Jacksonville to Austin, Texas where my grandparents lived (where I call home in my own adult life). The way we drove took us through this massively long tunnel under some river that we passed on our way. The tunnel, for some reason, fascinated the four of us. We always insisted on being awake for it, so even if we had fallen asleep and we were getting to it at three in the morning, Mom and Dad always woke us up right before we got to the tunnel, and we watched the walls fly by and listened to what we insisted was the sound of the river moving against the walls, but was actually the many echoes of the cars and trucks driving through. We stayed up through the entire tunnel, on the trip there and back. Twice a year every year until our parents separated and we made a final drive to Texas, we watched every moment of the tunnel ride. And even when I was sixteen and we made the long journey back to Jacksonville for a visit with old family and friends, Mom woke us up for the tunnel. I have no idea why we were so attached to it, but it was something we always did that we loved, so that counts.

so glad you enjoy the beaches of FL

Wonderful - I love their intrepid spirit!

The one childhood ritual I remember, and miss, the most was our annual watching of "The Wizard of Oz".
.
This was back before Tivo, blue-ray, DVDs and even the home VCR. Back when your TV choices were ABC, CBS, NBC and a few unaffiliated UHF channels. Back when you would make a whole evening of watching "The Wizard of Oz", and everything had to stop when it came on because if you missed it there was no second chance. Until next year.
.
Mom and dad would pop a bunch of popcorn, slather it with real butter and dump a ton of salt on it, the 4 kids would grab their pillows and blankets and lay on the floor. We'd lay there, mom and dad on the couch, with nothing but the light from the TV, laying still watching the movie. Every fifteen minutes, at the commercial, was a frenzy of movement. Just a couple minutes to get another drink, more munchies, another blanket and go to the bathroom. The movie would come back on, everyone would lay back down and all movement would cease. And if you were really lucky, really really lucky, you'd be able to keep yourself awake for the entire movie.

I've been to Florida a few times during the Christmas holidays and we could always tell which people were Canadians. They always had on shorts and tank tops, while the Americans were shivering in jackets! LOL

My childrens childhood rituals....I am tapping my fingers together as if it could help me to think back.
They always loved to act. No matter who's house they were at, someone had to bring out Mom and Dad's video camera and they would create an instant play....polishing it over and over again as different people played different parts in their own interpretations.
For my own childhood, it varied greatly because of location. I can remember daily walks to the beach (followed by swims of course) as a little girl while my dad was stationed in Hawaii. But then things got busy and schedules took over as we grew older. A indelible ritual for me though from that time on was located in the joys of visiting my grandmother in the back woods of Louisiana. She taught me how to shuck corn, peel crawdads, pop peas and most importantly to savor God given peace in natures sounds and smells as we would sway on her porch swing watching the sun set.

Thank you. That felt so good to re-live.
Blessings to you today.

Great capture!
The holiday TV specials (Charlie Brown's Great Pumpkin, and then Rudolph and Santa Claus and Charlie Brown's Christmas) were special because they only came once a year. If you missed them, you missed out. It was a special way to mark the season. My kids aren't very attached to those shows, and I don't think it's just because the animation is simplistic. I think it's because we have them on video now and can watch them any time we want to.