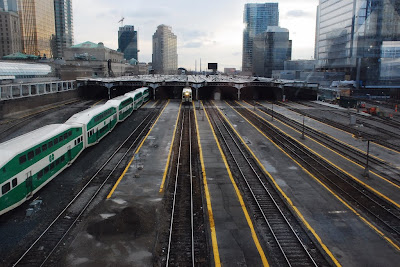 About this photo: Thematic Photographic is exploring "far from home" this week. Please click here to share your own far from home experience.

One of the reasons why I chose this week's theme is that I've spent much of my adult life trying to figure out how to use technology to make far seem a little less so. For example, we live about a two-hour drive outside Toronto, and I periodically end up in Canada's largest city to visit clients and do the reconnecting things a writer/media/geek/wonk needs to do. You can only be virtual and remote for so long, after all.

Sometimes I take the car, but on this trip I decided to take the train. And since Via Rail was kind enough to get me there a couple of hours early, I dawdled a little after I got off the train. In a pattern that's now become pretty standard whenever I go to Toronto for the day for work, I took pictures and sent a few home to my wife and kids via my BlackBerry. Later, I used IM to chat with Debbie as I walked from one meeting to another. (Sorry to the really tall dude in a suit who almost wore my nose print on his shoulder. I'll watch where I'm going next time.)

None of this was particularly earth-shattering. The pictures could have waited till I got home that evening and my wife could have lived without a blow-by-blow account of the directionally challenged taxi driver who blocked a good chunk of the intersection with an ill-advised and badly executed three-point turn.

But the neat thing was that I had the ability to bridge the distance, to make the experience a little more real for her and our kids. I doubt they looked up from their homework or video games to notice the freaky pic I sent of the CN Tower. But that wasn't the point. I was far away, but somehow I wasn't.

After growing up in an era where long distance phone calls were an expensive and rare luxury, and travel typically meant little to no contact for extended periods of time, being able to easily reach across distance and connect in this way is something of a revelation to me. It'll never get old.

Email ThisBlogThis!Share to TwitterShare to FacebookShare to Pinterest
Labels: Family, My travels

Thanks Carmi for the train photo! I really am a fan of trains...and their stations, the difference in cars, funny words like gandy dancer relating to the train world! On staying connected, mostly by phone, if at all. But funny thing I have a couple of girl friends that we keep in touch by thoughts, really. We'll be thinking about calling one another and suddenly one of us does. We've done this for years!

It really depends on who I am trying to connect with. If it's my husband (many times we do not travel together), usually it is a phone call. For other's it's a phone call for special occations, such as bithdays. 98% of the time, it is texting, and sometimes it's even FACEBOOK.

That is a really impressive shot. (I first wanted to say 'neat' or 'cool' shot but those didn't have the descriptive elaboration undertone that I wanted.) All of that to say, thank you for the nice view and sharing in your frequent trips.

It is really something living in the 21st Century with all of the technology available to us. I grew up with my dad being TDY with the military for 3 months at a time and the postal service was how we communicated with little frequency. I wonder why we never called one another? Maybe the time change was an issue.
Even after marrying my husband and being stationed places with him in our beginning years, 'snail mail' was our communicating link.
Now though with technology things are so much more at hand it seems. While I was in Texas this last year caring for my dad, my cell phone was forever attached to me and texting was a constant source of bridging the miles. Messages and pictures of moment events filling the invisible waves. I found that even with my family in the same room with me watching over Daddy, we texted messages to one another that couldn't be verbalized. For example Daddy would say he was doing just fine and I would text my brother that he fell twice during the day.
Interesting isn't it?

Have a blessed and destiny filled day.

I visualized every move of yours based on your skillfully narrated tale. Your wife is lucky as you take time to communicate with your family wherever you are. I guess sometimes you need a talkative person in your life to describe every move to make life more colorful and vibrant.

I haven't been very connected lately.

I am bad about connecting in that I really do not like to use the phone. I do like email and send messages that way to my children. But they are adults and busy and I usually feel guilty interfering in their lives. One rarely answers me, anyway...;-(

of course we have our cell phone...but no internet access...and sometimes no phone signal! i like it that way.

day to day connections...i prefer writing to talking...if i didn't need a phone for business...i'd rather not have one!

I keep in touch on my cellphone when I'm fortunate enough to have minutes on it. Same with my mom when she goes to visit her sister 3 hours away. I love being able to be a part of her trips when she's up there. Sometimes we just use the regular phone since both my aunt and I have unlimited long distance. At least, I think she does! And sometimes I still send letters. Txting doesn't always replace letters to loved ones.

But your photo reminds me off a time I didn't stay connected when I went on a trip. A few friends and I went to a church conference 12 hours away, and we camped out in a tent at the YMCA campgrouds. There were a few cellphones, I might have called my mother once. The thing about it though, that brought it to memory was the fact that this campsite was surrounded by traintracks, highways, and an airfield! So many people going so many different directions!

Oddly enough, we all kind of went different directions after that trip. No big surprise I guess.

Like the photo, but then there is something about rails...

There is also something about backpacking and being out of the reach of cell towers and not having a satellite phone with you!

Ah, Toronto... I loved my visit there and I'm aching to go back. Your photo reminds me of when we stood watching the never-ending trains coming out of the station... You just don't see trains that long here in the UK!

True story. My second eldest daughter lives in Houston, Texas and was admitted to the hospital Thursaday. I nlabor with her first child, my first grandson. Due to circumstances beyond my control, was unable to be there. So her & I texted contatantly, sent cell phone pics up until 30 min. before he was born. Then a few hours after he made his glorious arrival, her and I connected through Skype.

I am heading there soon (in person),

Ah, but sometimes that very interconnectedness keeps us apart. I've been travelling VIA Rail for years, and I've found that the camraderie on board between passengers is dwindling thanks to the free wifi - everyone's hunched over their devices! It takes the longer journeys, like the Canadian's cross-country trip, for those traveller friendships to strike up.