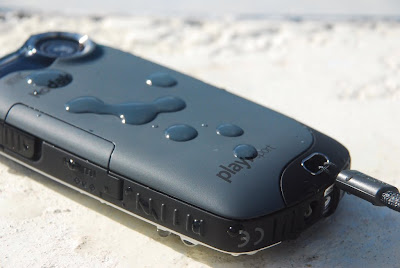 ...You know that camcorder you advertise as waterproof? Well, I hate to be the bearer of bad tidings, but it isn't.

This is a picture of our PlaySport ZX3. Actually, it's my wife's. I bought it for her birthday in September. The geek in me liked its feature set, and I figured the waterproof thing would come in handy some day. So when we hit the pool during our recent vacation, I brought it along and let it get wet.

The fogging screen was the first sign that something was amiss. I quietly took it away from the kids, opened it up and carefully removed the battery and memory card. Bad sign #2: Both of them were wet. Ruh-roh.

Later, when I thought everything was nice and dry, I put it back together and powered it on. Yet another bad move on my part, as it emitted a squeal that reminded me of an angry cat being tossed across a chalkboard (kids, that's what we used before SmartBoards. Ask your mom.) My wife called out from the other side of the house, fearful I had angered the natives.

The ZX3 was now truly and officially dead. On my watch. My wife was, understandably, not pleased.

Into a Ziploc bag with rice it went. Three days later, I successfully powered it back on and with the exception of some apparent water stains on the LCD screen, it's now working just fine. Thankfully, the content we originally captured on the card was undamaged. It won't be going anywhere near water ever again. My wife won't let me near anything of hers for far longer than that.

Your turn: Extricating oneself from the proverbial doghouse. Suggestions?

Update: I tweeted the URL for this blog entry to the folks at Kodak. Their Chief Listener tweeted me back, and asked for more details via e-mail. Long story short, the company has offered to replace the device at no charge. A few months back, I wrote an article for the Toronto Star about companies using social media to improve their customer service competencies - link here - so imagine how tickled I am to be on the receiving end of a clear SM-CS best practice. Major thanks to Kodak, a company that very much gets it.

Not your fault...they said it was waterproof!!!

Ditto w/Tabor... If anything, take the darn thing back and get something that IS and has been proven to be guaranteed.. Could u have been the lucky one to get the one that wasn't assembled right? I think by writing a column about this may prompt the company to get back in your good graces and send u something upgraded.. Write to corporate, I did when I wasn't pleased w/the customer service when I bought a vehicle years ago and boy did I get action!. lol

lol..well technically not your fault they said waterproof

Oh grrrrrrrrr! I am with the above 2. Return.
I think you did everything right in trying to get it to function up to its supposed state- but you shouldn't have had to!

I once bought some drawers to hang in my closet. When they were finally assembled and hung according to the direction manual...they wouldn't roll completely shut. To this day I have 3 drawers on my closet wall with socks and shirts and everything else coming out the 4 inch crack above the next one.

I tried EVERYTHING to get the company to "fix" the issue....to no avail.
In your case...this is a tad more important. Besides....it involves your wife and her gift!:))

Technically it's not your fault. I sure would raise a stink with Kodak over the waterproof feature. They can't advertise that kind of stuff if it isn't true. It's false advertising and someone else might get duped. Sorry.

Hey! Don't make me the bad guy! I never blamed you just the machine. I think we should return it, as it doesn't live up to what it promised!

It did take cool under water scenes. Too bad we can't try it again!

I had to read this based on the title. I am debating what to do about my Nikon. My OLD camera was with me for 30 years. The new one did not make it through 100 pictures. Yet the store will not replace (thanks B.B. ~not) and repair is more than to upgrade.

Hey Carmi-
Really sorry to hear this! Have you contacted support about this? If not shoot me an email via connect(at)kodak.com with some more info.

Well, boogers...we just bought one of these because it was waterproof and figured it's be fun to use in the snow. This does not bode well...

i spend a lot of time in the doghouse...

i am a trouble bubble kinda guy!~

however in this case, this was not your fault and i think you got 8 guyz n galz backin ya!

Just keep being as sweet as Scooby and she'll forgive you quickly! After all you fixed it instead of tossing it out the door! Great work I say, Dr. Fixit! Oh yeah and the rice thing was pure genius!

I'm not sure I have any suggestions for extraction but if you are ever in the neighborhood.. I have a really, really, really good doghouse for sale cheep. It is large enough to hold a child and a dog.. insulated with R11 house insulation in the walls, floor and roof. Has a light for heat, a fan for cooling and a removable flap door. It has a lovely linoleum floor and a covered porch in case you need to dine in the rain. All in all a good place for you to hang out when in trouble.

I have something I say to Padawan every time he borrows something of mine and brings it back in less than perfect condition that I think is appropriate. "This is why I can't have nice things."

Just a note: when they say "waterproof" they really mean "water resistant." Which pretty much means you can get a little water on it and it will be fine as long as you don't let it marinate.

I'm sorry that you're in the dog house. When I'm mad at Padawan because he's done something wrong he either makes me a special dinner or he gets me my favorite drink from the coffee shop. Or you could just try groveling.

Crud. We bought one of those for my 17 yo son. I guess I'll have to warn him not to use it in the water.

Hey Kodak - way to step into the fray! Do Beth's business cards really say "Chief Listener"? Carmi - As long as you weren't in an 11' deep pool at the time, I'll bet Kodak will take care of you. But it's still your fault ;-)

Hey.. what is the rice in the bag trick? That might come in handy one day..
Yeah, well I sort of see why the Mrs. says "hands off" now..LOL

Glad it's back working and your money was not wasted. that iritates me to waste money on something un-fixable..

Have a great rest of the week Carmi!!!

Actually it is "waterproof" (though that term covers a pretty wide range and "water resistant" is a better description). I know as I've dunked one. I'm guessing you got one with a bad seal that some how got through quality control. You did the right thing by writing and Kodak did the right thing by replacing it.That's the kind of company I like to deal with.

I have to agree, doghouse or not, it stated it was waterproof. I think it is great that Kodak not only replaced it, but also took notice when your comments weren't specifically directed towards them. This is the kind of customer service all companies need to strive for, and it equals WIN!.

I have another entry for the wet theme here. http://the-gearheads.blogspot.com/2011/01/frozen-wet-tp-129-and-one-last-favorite.html

I guess given the Kodak Chief Listener follow up, which was cool, are you going to take the plunge with camera #2?

I'm really quite impressed with my PlaySport so far. Like the Zi6 which I totally wore out, it gets used a lot. Mostly because of it's portability. I'd have bought it even without the 'waterproof' claim but I definitely wasn't sad that it claimed to be so water-resistant. It's nice to think that I can pull it out in the middle of a rainstorm if I have to, without worrying too much about ruining it. That's enough for me. I don't expect to ever have any reason to use it underwater so perhaps I won't encounter the same problem that you did.