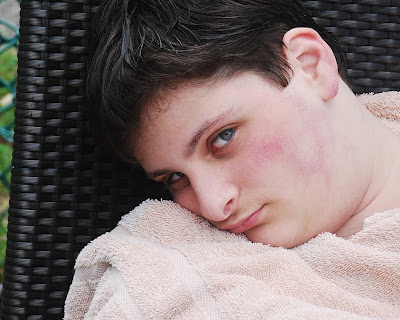 Seventeen years ago today, a tiny little man battled his way into the world and in the process turned me and my wife into parents. As you can see from the picture above, Zach is no longer a tiny little man. He's an almost-man. A man-child. He's now taller than I am. He shaves. His voice is probably - ok, definitely - a little deeper, and his world view, once limited to the bassinet over which we hovered like the deer-in-the-headlights new parents we were, now extends over an ever-growing life.

Zach moved away to London with us when he was two, and later became a big brother to Dahlia and Noah. He's evolved a wickedly sharp sense of humour and a kindness that touches everyone he meets. He can still torment the little sibs with ruthless efficiency, of course, but he's always there for them when they need him most.

He recently finished shooting his first movie for one of his classes, and watching him on-screen was kinda like watching myself. The voice, the mannerisms and the tone...it all reinforced just how neat this whole circle-of-life thing can be, and how glad we are that he's our kid.

A year from now, he'll be allowed to vote, to drink (in the land of his birth, anyway) and to get into R-rated films without our permission. He'll be able to legally sign contracts and get picked for jury duty. He'll probably be able to pilot an experimental Czech-designed aerobatic plane, too. But for now, he'll still be our lovable, delightful, ever-entertaining kid. Bigger than we are, but still our kid.

Happy birthday, not-so-little man. May we have countless more happies to share, and may your future be as bright as the candles on the cake we just ate.

Oh my but I can see you in him. i thought the photo was of you when you were younger.
At our house on the kids birthdays we all sing Happy birthday very loudly and very off key. We than do the short version (on our knees) Since I can't do that for your Zach, I will do my best Internet version
Happy Birthday to youuuu, Happy birthday to youuuuu, Happy birthday dear Zaaaach, Happy Birthday toooOOOooo yoooouuuuu.
I'm sure it's not quite to same but best birthday wishes to Zach
BTW they do keep getting older, my eldest is 38 and my youngest is 22 and the sibling thing keeps going on too.
Johnina

He is a handsome young man, and from the photos you have shared, he reflects both of his parents in his good looks and gentle (and confident)eyes. Happy birthday, Zach! My wish for you is that that world recognizes all that is uniquely you and offers opportunities for you to thrive and make your mark.

Happy Birthday Zach. I hope Zach carries forwards the traditions and beliefs of his family into the next generation.

I hope you had a happy day.

May he carry the traditions and beliefs of his family into his own and may he be blessed as his parents to have such a wonderful family.

Hope you had a good day Zach.

HAPPY BIRTHDAY ZACH! You're not only taller than your dad, but better looking too. Your steady gaze into the lens says you're ready to take on life. May it be a long and happy one.

Hey Carmi: This is so cool!

Happy Birthday, Zach! I remember turning 16 more than 17 because I was able to earn my drivers license. There was a feeling of freedom, and of course impressing girls! As my Aunt (who is almost 92) told me at 17: "You're only young once. Live it up!"

Zach, may your birthday gently breeze in showering you with all the things you hold dear, and bring you new joys to learn! Remember that the more birthdays you have the longer you live! ....and Celebrate you!

Wow! Zach is exactly a mini-Carmi! When I first landed, I thought it was a younger photo of you! Crazy!

Happy birthday Zach! I hope it's an awesome day... My wish for you would be to enjoy the moments today. Take lots of photos, and cherish it! One more year until adulthood... I wish I could tell my late-teen self to slow down and enjoy those last few years of living at home with my parents.

Happy Birthday to Zach and to all of you!
I know what you are saying when you describe his traits because I see the same in our older sons and their dad... right down to the deeper voices and taller build.

Happy Birthday Zach!!
My wish for Zach is he never forget how beautiful life truly is..