From ashes to ashes... 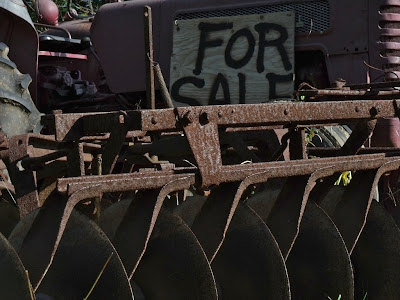 About this photo: It's Thematic's metallica week, and you're invited. Just go here. It won't hurt.

There's a cruel irony to anything new and shiny: With few exceptions, it begins to degrade the moment it's made. Sure, we do our best to keep it looking showroom-fresh, but the sad truth is that it'll never be as lovely as it is the day you first bring it home. It's all downhill from there.

My take? We buy stuff to use. The value isn't necessarily in the thing itself, but in the value it delivers through its use. For example, my camera has more than its share of dings and scratches. Some of its corners are almost ground down from years of being pulled in and out of its bag, exposed to some of the worst weather Canada can throw at it, and more than a few errant kids and distant relatives.

Still, it couldn't be lovelier to me, because it's helped me record years of my family's life, moments I otherwise wouldn't have been able to capture. I'm sure I could have stuck it in a big glass case on a big glass shelf, and I'm sure doing so would have kept some of the white labels from flecking off of the black body. But what would be the point of that?

And then there's this rusted-out combine. It looks derelict now, but how much corn did it harvest over its lifetime? How critical was it to the family that owned it, that relied on it to keep the farm profitable? How many of us did it feed?

The metal may be returning to the form from which it came, but I'd argue it's more beautiful now than it's ever been.

I agree. The signs of use spell pure love!

Ah, I think you have nailed it, Carmi. Things are meant to be used and enjoyed, not kept on a shelf and never touched. My mother did not live this way and I am trying to not follow in her footsteps.

Rusty metals are a breeding ground for stories, maybe even old secrets! A used object creates a unique, non-factory line beauty reflecting the life of its owner and maybe a little of its owner's character!

Oh my! I saw this and BINGO, I remembered a post I did on rust. Then I remembered I DID have some pics to play along with this thematic set... I guess it just took the site of something old and rusty to get the creative juices flowing...

I had a quilt that my grandmother made that is almost in shreds. I thought about boxing it up earlier, but I know she made it to keep someone warm. I keep picking up pieces from the floor, but love it just the same.