In the land of the big iron 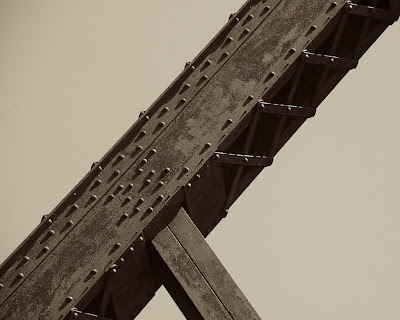 About this photo: It's Thematic's triangular week, and you're invited. Just go here and all will be explained.

There's a reassuring quality to old engineering that I just can't get enough of. I dig old bridges and buildings, built long before the era of supercomputers turned building stuff into a lowest-common-denominator process. They were overengineered, and as a result many of them not only still stand, but they continue to carry massive loads central to a modern world their builders never envisioned.

In this case, one fully loaded freight train after another rumbled over this phenomenally beautiful structure while our family explored the canal and locks below. It was humbling to stop whatever we were doing and feel their vibrations passing through our feet.

Whenever I have the time, I like to linger alongside creations like this one to not only admire the visuals, but to also feel that intangible force that makes them special. Because we truly won't see anything like this again.

There's a lot of character in something old... not to mention history- and the fact its lasted as long as it has.

Old things that have survived were built to last, not to be replaced by the next new thing that comes along.

Remember when we were kids? The phone our folks had in the house was the same one the entire time we were growing up. No replacements necessary!

I don't like change and hate to have to relearn to use a new cell phone (which is why I still have a crummy one).

Beautiful! A very powerful image, Carmi. Thanks for sharing it!