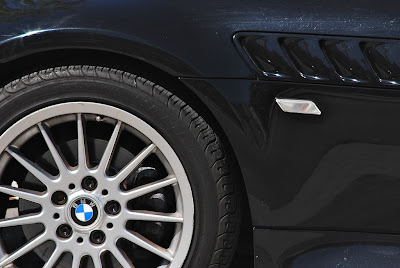 As we continue our week-long look at details (click here for more), I realize I've been leaning rather heavily toward the automotive end of the spectrum. At first I wasn't sure why, but after churning it for a bit, I think I get it. Looking back at my photo shoebox - you have one, too, don't ya? - I realize my car-themed pictures are rarely wide-angle compositions of the entire vehicle. Instead, I tend to isolate a relatively small chunk of the car, a feature that catches my eye.

Again, no reason for this. There doesn't need to be, after all. Shoot what you like and let the rest kinda figure itself out. But for this week's "it's in the details" theme, it aligns nicely.

Which brings me to this rather imperfect example of a BMW Z3 roadster. The paint's seen better days, and the owner needs a lesson in waxing. But that's just me being green, as I'd jump into this car in a heartbeat if given the chance. Top down, lovely day...I'd even forgive the unforgivable sin of having an automatic transmission.

Of course, had I actually jumped in, I'd have been arrested. So I did the next best thing: I backed up waaaaaay across the street and stole this shot instead. Between the tire tread, alloy wheels and cowl vents, I knew it was a smile-inducing detail to remember.

I shoot for whatever catches my eye- be it in beauty, quirkiness, or if it reminds me of a memory...I've also learned long ago to shoot from unexpected angles, that always brings out the best in photos. Shooting from ordinary positions gets to be expected and boring...


Thanks for your kind wishes, cousin!

As you, I love shots of cars, either the whole thing or just parts. As for what I shoot --- anything that is not moving, and if it does I switch to burst! I'm really enjoying getting back into the TP challenges, Carmi. And thanks for your kind and encouraging comments! BTW, don't sell yourself short!

Just made it back to Columbus from Berkeley Springs, W.V.
~

This was an inspiring post! I keep my camera in the glove box of my car. I plan on using it more as I travel out and about this Autumn!