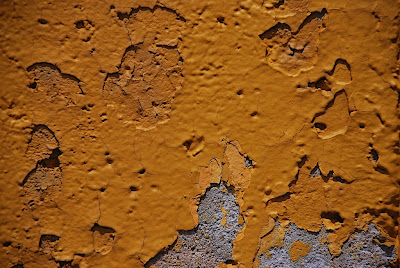 As we continue to look at the rougher side of life - please head here to see what this rough stuff is all about - I'm starting to appreciate something: That things are slowly deteriorating all around us, and they often do so in absolute anonymity. The process of erosion is so far below the radar that we typically fail to pay attention until something drastic happens.

Ironically, I took this picture in Laval. It's just north of Montreal, and part of a region that's been getting national headlines in recent weeks for a spate of high profile infrastructure road collapses and other concrete failures. In fact, I grew up a few kilometers away from the Boulevard de la Concorde overpass, whose 2006 collapse killed five people. In case you're counting, the Boulevard du Souvenir overpass - even closer to my old house - failed in 2000, killing one.

For what it's worth, I don't believe these events are random. They're largely the result of a provincial culture that has generationally neglected infrastructure and sliced maintenance and inspection budgets below critical levels. What we're seeing now - the Ville-Marie Tunnel collapse, the Mercier Bridge, the Champlain Bridge, you name it - is the true cost of such short-sightedness. You can't escape physics and time, apparently.

Your turn: My yellow-tinged photo is deliberately abstract. Care to guess what it is?

I may be wrong... but I googled the description of your photo and came up w/this: http://www.treehugger.com/files/2006/09/fmo_tapiola_pre.php
Kruger Building at Uni. of Laval.I am guessing this because of the high percentage of wood chips used...

It looks like paint on concrete, thick and unevenly put on. I'm going to guess a bridge or a restroom at a rest stop.

I am guessing it's the side of a building, like the foundation, and the paint is chipping away.

ok, this image reeled me in.
It's GLORIOUS!

thank you so much for sharing this....