The late, much-missed Friendly Giant used to tell kids tuning in to his television show to "look up, waaaay up." Although I always understood the literal meaning - he was playing a giant, after all, and the camera would slowly pan up the outside of his "castle" (likely just a stack of painted cardboard boxes) to convince any children who still hadn't clued into his gimmick - I still missed the more subtle message buried within those simple words.

Of course, now that I'm older and wiser, I appreciate the wisdom of these words, and the figurative meaning that all adults would do well to consider.

With that in mind, I have evolved this habit - annoying to anyone who knows me well - of staring at the most mundane of scenes for an inordinate amount of time. I'm usually looking for something interesting, for the nugget within this sea of sameness that's worth pulling out, looking at in detail, and talking about over a mug of tea.

I suppose this odd behavior has its roots in my childhood habit of lying on the grass and staring at aircraft as they flew high overhead. I'd carefully watch as the contrails gradually evolved from thin pencils of white to jagged wisps. Eventually, long after the planes that caused them had disappeared into other time zones, the sky would be covered by these artificially-induced clouds. Then my Mom would call me in for supper and I'd have to explain why I was napping on the lawn.

I took this picture from my own lawn. The clouds are all natural, as far as I can tell, and I didn't have to lie down and wait hours for them to form. I was struck by the texture of the sky. I can almost reach out and feel the surface, in all its thickly overwhelming greyness. 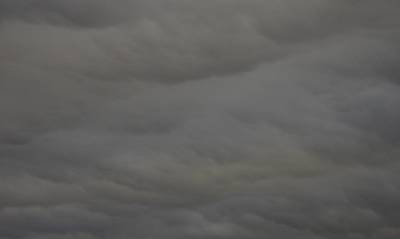 i think that its not so much rooted in our past (but agree how we were then is how we are now only with growth)....I think that watching the small details of life and appreciating their placement on a path most would ignore is te sign of an artistic mind with a touch of curiousity still left from childhood.

I love that I can still see the world in similar eyes I did as a kid. The way a building looks SO tall and SO intricate in its amazingly simply detail of construction. The way light can flicker of an object and project itself in warm and bright colors. The way a plant/tree/flowers leaves or petals seem to float when you focus more closely on them. i can stare at these kinds of things for a logn time too! I can relate and hence y i think I like your writing so much.

clouds are one of my FAVORITES! i love this picture.

I miss the chairs around the fireplace. Thats where I always wanted to sit when I watched that show. I wasn't really a sky watcher, I looked to the horizon on the ocean mostly. It sparked my imagination...

This one comes through pretty dark for me, but part of the wonder, I think was in finally realizing, gee, the sun's glare on the monitor (yep, dolt that I am!) makes it look like a blank rectangle. When I clicked to see the larger image, I sat up closer, blocking the glare and the clouds' textures came through like looking into a crystal ball!

Your cloud picture reminds me of how I feel when I fly. I love flying above the clouds, when the sun is shining on them, even though it's absolutely BLINDING. It just looks like miles and miles of snow.

Veda's sorry for posting annonymously without giving her info....*oops!*
(http,vaza,blogspot,com)

When I was little, my father and I and some of the sibs would go out on the back patio and watch thunderstorms approach. Several years ago he went on a photography jag and just had to capture some lightning. He finally did, and if I can find one I'll post it soon.

I love looking at clouds, and I should do it more often instead of rushing around in the world consumed by busy adult things. Thanks for reminding me about that, Carmi.

An ever-changing pallette of texture and design; light and depths and movement which defy the confines of a snapshot. It is a living canvas, providing simple joy to young eyes and deep wonder to older ones. New shows presented every minute of the day, folks; step right up.