Time for a closer look

I may as well fess up about my longstanding macro photography addiction. Here goes: my name is Carmi, and I have a problem. I like to put extension tubes on my camera so that I can stick it reeeeeeally close to all sorts of otherwise-mundane objects and take pictures that, for all intents and purposes, seem to have spent a little too much time in the acid trip section of the darkroom.

I constantly seek out objects which would look interesting, or merely bizarre, when viewed from a fraction of an inch away. If I do my job correctly, you see things you wouldn't otherwise see. And this assumes you even know what you're looking at. Sometimes, the lens goes so close into the shot that all sense of context is lost. I love when viewers play guessing games - and don't get it until I tell them what they're looking at.

The challenges of light

The optical realities of macrophotography are somewhat harsh. First, mounting extension tubes between the camera body and the lens reduces the amount of light that hits the film plane. This makes handholding a virtual impossibility. Even with ultrahigh ISO film speeds, it's a difficult balancing act. So out comes the tripod. Worse, depth of field is about as wide as a human hair. This forces a somewhat obsessive process of composition and focusing. You can close down the aperture to help the depth of field problem, but then your exposure times go through the roof.

As a result, I end up hovering over the camera, adjusting both it and whatever I'm shooting for optimal composition and focus. Flatter compositions are better, but they're not always feasible to set up - have you ever tried adjusting a pile of rocks to lie flat?

Focusing challenges are often solved by nudging the chocolate covered raisins - or whatever else I'm shooting - around until they settle nicely into the miniscule depth of field that I've got. It's around this time that I curse my clumsy fingers, and wish I had more manual dexterity than I do.

As a result, I often take huge amounts of time setting up for the shot. Sometimes, I simply never get to the point where I'm confident I'll actually get something usable. In these cases, I often end up eating the subject of my aborted photographic survey. By now, you all know that food is one of my favorite survey targets.

Long exposures mean absolute stillness is a must. But with three little people and a cat padding through the house, it's a luxury I can rarely afford these days. Waiting until the rugrats are in bed is one option. But shooting by the available light from a window is preferable to using artificial light. I know I could always use Photoshop to correct the unnatural cast introduced by a incandescent or fluorescent bulb, but that's cheating. And even if I weren't so photograhically virginal, nothing gives you quite the depth and dimensionality of a gentle, early morning bath of diffused sunlight through a patio door.

If I shoot during the day, I'll try - desperately, and most often unsuccessfully - to get everyone to do absolutely nothing for the duration of the shot - sometimes 30 seconds, other times 10 minutes, depending on how I've set things up. Needless to say, I don't get to do this nearly as much as I'd like. It's a lovely little mental and physical game I play, dancing around my tripod, making countless minute adjustments and talking myself through the painstaking process as I try to grab an anything-but-candid slice of an unnatural scene. I don't do it nearly often enough; something I'll work on in the coming year, because few shutterbugging experiences bring me as much visceral enjoyment as this one.

This is all a somewhat long-winded way of introducing this next picture on my little photographic journey into the twisted depths of my camera bag. I really like this one - which says something, because I'm usually so self-critical of my pictures that I can't look at them for fear that the technical flaws will cause me stress. In this case, everything aligned nicely. It's not so much the colors - there are only two main ones - or the composition. Rather, it's the surface textures. I absolutely didn't expect there to be so much detail when I got that close. Click on the picture for an even closer look.

Here's where you come in

I'd like to hear your guesses as to what this stuff might be. I'm also hoping you'll share any suggestions for future macro observations - which I would, of course, post here. Beyond the merely photographic, I'm also hoping you'll take the time to start squinting at little stuff in your own daily travels. The world can look really cool if you get up close and personal. 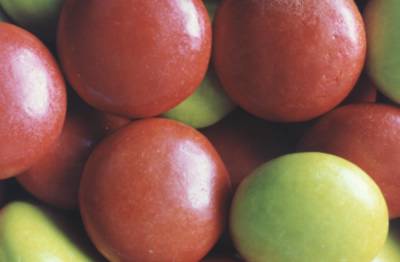 Suggestions? I haven't done a ton of macro stuff, but I know that people that do use flashes that will give you a suntan at 50 paces.

Personally, though, I prefer not to use flash. I like found light, and I like the meandering carefulness that setting up a shot takes. It's the process that's enjoyable, not the final result. Or not exclusively the final result, anyway.

So my advice is to enjoy the process.

It's nice to know there are others out there - however few we are - who enjoy this arcane experience. The things that go through my head as I compose a shot are similar to the experience of writing something. Only the tools and techniques are changed.

Agreed about flash. At such close range, it's difficult to control. A specialized ring flash would work better, but that would defeat the purpose of working with what's already there. This particular picture was shot beside a glass patio door at breakfast-time.

You've motivated me to start considering my next set of macro subjects. Fun stuff!

I'm putting my vote in for M&M's as well...or maybe Skittles.

Thank you so much, Carmi for your sweet words of encouragement on my blog.

smarties. they gotta be smarties.
though i cant understand why you had smarties available to shoot at breakafst time so i dont know that it is candy. looks like candy. did it taste like candy carmi?

Those are Christmas Smarties. Absolutely.

Carmi, excellent post! I now know some things about photography that I wouldn't have understood just watching someone take a shot like that. :) Thanks!

As for the image...I was first thinkin' m&ms, but they're too well-rounded. M's always have malformations. I don't remember much about smarties, but if that's what Terry says...I'll go along! ;) He sounds pretty confident...

Skittles? Playing pieces from an obscure children's game? Some sort of bean-type creatures?

they look like red and green spree candies?
anonymous

they look like red and green spree candies?
anonymous

Did you ever read Games magazine? They had a section in every issue called Eyeball Benders, with macro photos of all kinds of stuff, but cropped so it was harder to guess.

They look natural, like fruit or vegetable skin, but they also look so flat.
If they were orange, I'd say those donut shaped peaches, but I got nothin'.
Please, please tell us!