Whether we want to be there or not, many of us these days find ourselves amidst the unending knots of aggressive Christmas (sorry, holiday season) shoppers in overcrowded, overstimulated malls.

I took this picture at least nine or ten years ago. I found myself wandering the mall near our then-home on the West Island of Montreal, Quebec. This particular shopping mecca is known as Fairview Point-Claire, and I haven't missed it one iota since we moved around 730 kilometers west of its satellite-viewable parking lot.

Still, while walking past the water fountain that used to sit in front of the long-since-closed Eaton's department store, I started to stare at the water as it shot straight up in an never-ending jet. I kept trying to imagine what it would look like if I could freeze it just long enough to get a workable picture of it.

On my next trip to the mall, I brought my camera with me. My "real" equipment is a lovely old Nikon that shoots almost-obsolete 35mm film. But I've been using it forever, and its now-faded blue carrying bag is stuffed to the gills with all sorts of lenses, and a flash that can turn night to day from 60 feet away. I have no intention of ever selling it, because, like my pen, it's become almost a part of me.

I sat down on a nearby bench and got myself ready. Out came the 300mm telephoto lens, on went the mondo flash. People stopped in their tracks to watch me shoot a seemingly senseless scene. Out of the corners of my eyes, I nervously watched for the mall's rent-a-cops, who I'm sure had already been summoned to escort me by the elbows off the premises.

But it didn't take long to get what I wanted. I buttoned up my equipment, politely smiled at my gang of new fans, and headed home.

Like many non-people subjects of my photography, this one sticks in my mind because of its transience. A blink after I clicked the shutter and the flash froze the image forever, the water had already moved on. It would ultimately move up, down, become evaporated, get sucked through the filtration system for yet another wild ride, and ultimately go whevever the imagination thought it would go.

But for that slice of time, it was Right There. And it remains Right There to this day, to remind me what it felt like to have such total control over such a minor moment in time. 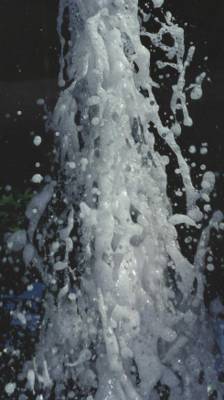 That's an incredible image! I'm so jealous, I know zero-zip-nada about Real Cameras. Whatever great gadgets you used there, you got a magnificent still of that water. Way to catch the quiet moments in a place so overcrowded with chaos, too!

That is breathtakingly beautiful...I am so bad with photographs -I am jealous!

I can't see it!! I think maybe you need more hosting space.

Not sure what the problem is: it's displaying perfectly well from this end. No errors from the Blogger dashboard either. I'll reduce the # of postings displayed on the Current page - perhaps your server doesn't want to wait around for so many posts/pictures to load. Let me know if that does the trick.

That's a serious strobe. I wish I had one. My Nikkormat is older than I am and in a pinch can be used to hammer nails. The meter is a little quirky but just picking the thing up makes me smile so I totally hear what you're saying. Who know you could get something that cool at the mall?

That's awesome. I gave my 35mm back to my dad when he bought me a point & shoot when I was in my teens. That sustained an injury in high school photog class, but still worked. Then a boyfriend stole it. Or the underwear gnomes got greedy, who knows? At any rate, I'm running with a Canon Elph right now and I love it like a baby, but I hate that I can't adjust the shutter speed. I would love to take better action shots like this one. Water always looks blury with my Elph.

Your photography is becoming more and more like art everyday. You've managed to capture the energy of the fountain and freeze it..

..And yes, they will be warning shopping centre security guards around the place to 'Watch out for a suspicious guy in a trenchcoat photographing fruit and vegetables, leaves, cows and water'!! ;)

Or I could be dreaming. I love my old Nikon F3. It's a wonderfully well-designed and -engineered piece of equipment. Just using it is pure tactile pleasure.

Wow. THATS what they should put on the ceiling at dentist's offices, a mind could get lost in that photo!

You are the king. Beautiful!