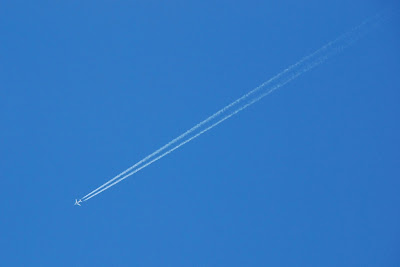 After dropping one of the kids off on a playdate, I got back home and heard a familiar sound as I stepped out of the car. I don't know why the distant sound of a jet makes me instinctively look for the source. No matter what I'm doing, I'll crane my head skyward and try to first find the plane, then identify it.

I post this tonight because, once again, I'm heading off into the big blue sky for a bit. This time, I'm headed to the other side of the continent for a couple of days in San Francisco, CA. I'll be attending a conference put on by HP, wearing my hat as a tech analyst for much of the time that I'll be there. I'll be bringing my camera and laptop, so I'll update the blog from there. I should be home late Thursday night, at which point I expect to kiss my sleeping wife and our sleeping children, then get caught up on my own sleep.

This picture speaks to me, because it reminds me that sometimes I'm on the ground looking up. And sometimes I'm up there, looking down. And while I'm slicing through the sky, I often wonder if somewhere down there, someone stands in his driveway, looking up, wondering the same things I do when I take pictures like this.

It's a pretty big world out there, but I'd still rather be in my driveway, listening to the sounds of my kids' voices as they gradually win the battle against the fading drone of a faraway jet plane.

I see snow-capped mountains all around me... And a beautiful sky just about to set over the water in English Bay. What a gorgeous evening we've finally been given after torrential rain for weeks! :D

I hope that you have a safe trip, and a safe return to your family. The children and I hate it when my husband has to travel. Thimgs at home aren't the same. I'm sure that your family feels the same way.

Oh yeah, you inspired me. I took a pic similar to yours. Check it out...

I hope you have safe travels and return home. It's pitch dark outside here now...and the stars are hard to see in the city but I see some raindrops!!

I see a "good image", man. upon closer observation, it appears to be a fairly large plane!

I know what you mean about wandering if anyone is looking from the ground when I'm up there. I think the miracle of flight, really is that, "a miracle" that man has figured out how to do it.

Have fun in San Fran! I love that place! You can read about my experience there in my archives:
http://chadoneil.blogspot.com/2006/07/girl-on-golden-gate-bridge.html

Maybe I'll be seeing you as I look around. I'm very close to San Francisco. Bring your umbrella, we've been having rain and wind. It should be nice by the weekend but I guess you will be back home snug in your home with your family.
Have a great trip.

At the moment, if I look up I see nothing but sky (or actually ceiling)....LOL

Have a safe trip, Carmi, and tell HP I like my All-in-One printer.

I see clear blue skies and outside my window in my new home, I see a rainforest covered hill. Gorgeous. I love your photo BTW.

I know that you will have a good trip! And get lots of pics! Tell your wife to hang in there and tell her to stop by my blog so we can commiserate together! :)

Oh and I like this image....it makes me want my husband back right now! :) Like it is some sort of dream sequence!

Being an environmentalist I see too many contrails. I especially noticed the multiplication of these in the blue desert sky on my last trip.

Enjoy your trip. I love San Francisco and I imagine you'll have some beautiful pictures to share.

Right now I see the ceiling...but when I was outside earlier I saw the tops of trees, the sky, many beautiful clouds and several birds...

Have a safe trip, and a fantastic time!

That is one startlingly blue sky!

I frequently wonder the same things while staring at jets flying over our boring little state.

It's been wonderful here, record high temps around 80 degrees yesterday and today.

I see clouds, and tree tops, and birds. Its better than my old view of buildings set together to closely. I'm so glad I bought a house in the middle of nowhere versus the city I grew up in.

Safe Travels to you, Carmi! Contrails like this to me lend a sense of flying "Across the Pond". Exciting and full of imagination!

I love looking into the sky, whether there be no clouds, or whenever there are beautiful formations.

The last time I flew home from Virginia, the clouds were so beautiful, and I was wishing I had access to my camera, and access to words such as yours or SRP's.

Carmi I have done just EXACTLY what you described about looking down from an airplane wondering if there was anyone down there stopping to look up at me. I didn't know anyone else ever had those type of thoughts.

I want to thank you for the kind comment you left on my last blog post. You truly encouraged me with your words.

Oh by the way (sorry for a second post), in answer to your question about an idea for talking your wife into letting you get into motorcycling...

If you do it like I did it will have to be considered a long term goal. I went years turning my head and straining to see every motorcycle that we happened to pass while in the car. Of course I would end each of these dramatic episodes with a mumbled yet distinct "boy, his wife must realy love him!" comment. Eventually I think she just gave up :)

you KNOW i love that shot!
God bless you in this passover season.

The lavender petals of wisteria against a background of picture-postcard blue sky.

When I was in North Georgia, I was reminded how I don't look at the stars enough. When I was a kid, I stopped to look at jets flying overhead and stars. Why do we unlearn to do that?

I'll be looking up for the sound - I always do too! And I find I always stretch as far as I can to see out the window when I'm in the air. Great post...again.

I don't know if you intended this or not...but Into The Blue Again is the latest CD from one of my favorite bands...The Album Leaf.

Try giving them a listen, I'm sure you'll like what you hear :)

I wonder how an astronaut in orbit would look "up?"