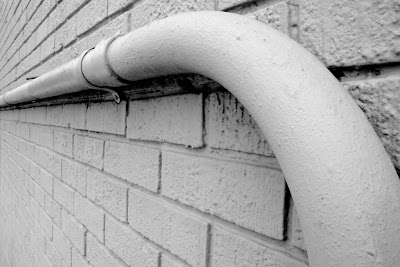 It's the middle of the day, and the street with a fried chicken restaurant on one side and the police headquarters on the other is filled with people who don't seem to have anywhere else to go. They wear dirty old jackets as they greet each other with a collective enthusiasm that defies the drudge that surrounds them.

Day in, day out, the pattern repeats itself, surrounded by painted-over brick buildings that have been witnessing this never-ending streetscape for longer than I've been alive.

The pipe strikes me as an interesting study in perspective, a not-quite-shining image that most of the folks that mill around just meters away from here have likely never taken the time to observe. One wonders what they'd think about their everyday environment if they took the time.

I quickly capture the image as whispered voices behind me comment on the strange scene of a trench-coated interloper taking pictures of "their" corner. I leave as quickly as I arrive, the voices fading behind. They'll no doubt be here tomorrow, as will the scene I've just captured with my camera. Not much changes in this place. Strangely, I find that comforting.

I see a world of possiblity in what others may not see.

This image is great. I love the curve of the pipe alongside the lines in the brick...well done! Great tones as well.

I always see little details...things that are missed in the everyday mundane tasks. Like the contrast of shape in your picture. The curve of the pipe...the sharp lines of the right angles of brick repeating over and over.

that's a great photo and perspective, carmi. you and anna are great at noticing these small details.

i tend to study people instead of things like this. people fascinate me.....

I too seem to notice the lines and textures that make up the small details. Since blogging I am more aware of how things all fit together.

Oops, after talking about detail, I forgot to talk about the lines and curves of your picture. I really like how the eye is directed by the curve and the tones of gray.

I try to see things that people don't see and try to look at things from another perspective. Sometimes I'm successful - other times I'm not so sure.

Great image the tone was awesome!

How do you do it?
How did you make a curved pipe on a brick wall so damned breathtaking?

I had the same prob yesterday while photographing the entrance to Tescos ( a supermarket!) People were giving me strange looks. Mostly they looked a bit sorry for me like I should be on some sort of medication or be receiving counselling. Funny what blogging drives you to isn't it?

I often notice places where small plants or weeds are trying hard to survive; coming through concrete or blacktop. It proves that we can all manage to survive and thrive no matter what, if the will is strong enough and if the push to the LIGHT is strong.